A guide on how to complete the Defenses Down challenge in the Vow of the Disciple raid in Destiny 2. 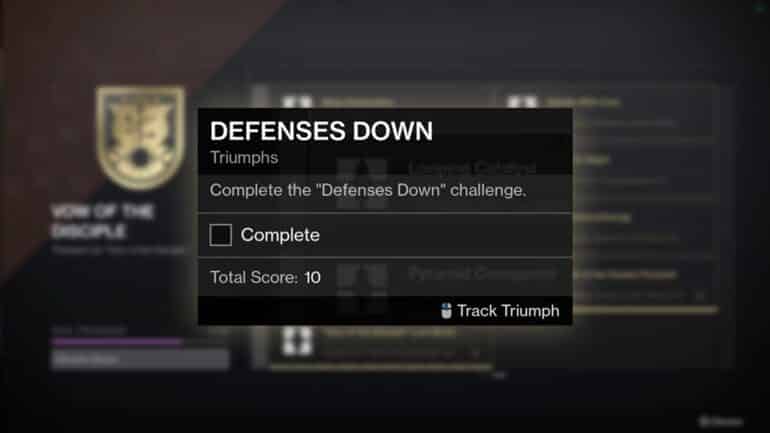 Defenses Down is one of the triumphs that Guardians can unlock in Destiny 2. This triumph is part of the Vow of the Disciple triumphs which can be completed in the raid of the same name. The requirement to obtain is triumph is a bit tricky to get, and it definitely needs coordination in between the members of the fireteam.

In this guide, we will be talking about the steps on how to obtain the Defenses Down triumph.

How to complete the Destiny 2 Defenses Down raid challenge

Exhibition is the third part of the Vow of the Disciple raid where players will have to transport certain relics through different rooms.

The laser relic is one of the three relics present in Exhibition that will be crucial in completing the challenge. This laser relic is the only thing that can destroy the Disciples Hourglass knight’s shield.

There are two raid debuffs that will affect the way that you will handle this challenge:

Because of these two relics, members of the fireteam have limited time to decide and thus should coordinate with each other on who should pick up what relic. The Pervading Darkness debuff is also present, but it does not have a major effect in the challenge.

Pick up the Laser Relic

Talk amongst your fireteam on who should pick up the laser relic first and what the rotation of the relics should be. This is also important because you can only see certain glyphs whether or not you are holding a relic.

Once the Glyphkeepers in the room are killed, the Disciples Hourglass knight will appear.

Let one of the Knights live

There are a total of seven knights throughout Exhibition, and since a full fireteam only has six members, you at least have to spare one knight to fulfill the requirement of the challenge. It is recommended to spare one of the knights on the room next to where the Laser Relic first appeared. Depending on how fast your fireteam can solve the glyphs and clear the room, you can also do away with killing less than six knights since the challenge does not require that all members should kill one knight.

Check out this video by Butters on how to do the Defenses Down raid challenge: