Here's everything about the new Eliksni Community Event happening right now in Destiny 2. 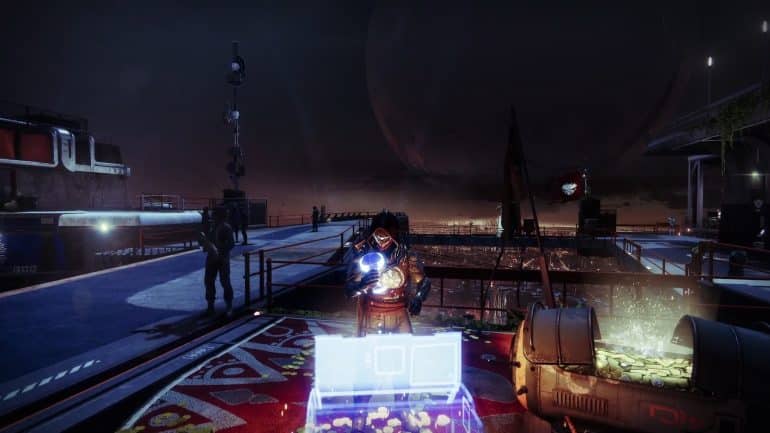 The Eliksni Community Event has started in Destiny 2. And with the help of Guardians from all over the system, we can do some good for the Eliksni Quarter while earning some rewards in the process. We have a limited time to get all as many coins as possible, so let’s not waste any more time on the intro.

Where to find the Eliksni Community Event

Upon loading into Destiny 2, you’ll be greeted with a message asking you heed the call to help lift the Eliksni Quarter. Afterward, you’ll be heading to the tower and you’ll immediately a chest in the middle of the Tower where the event vendors are usually found. The chest will have within it recorded messages from both Mitrax and The Spider explaining the situation and what you can do to help with the efforts to in improving not just the Eliksni Quarter but the whole city.

What is the Eliksni Community Event About?

The Destiny 2 Eliksni Community Event is a cooperative effort between all the Guardians in the game in an effort to improve conditions in the Eliksni Quarter. There is an overall amount of Captain’s Coins we must pool together for the benefit of the quarter and there is a personal track as well that gives you rewards after you’ve crossed some donation thresholds.

To keep track of the current status of the event in real-time, go to Eliksni.charity. This site will allow us to track the overall donations as well as the projected total based on the trajectory at any given time.

How to Participate in the Eliksni Community Event in Destiny 2

To participate in the event, you simply need to take part in activities throughout the system and you’ll earn Captain’s Coins at the end of each activity. These are the ones that are currently covered under the event:

Upon donating your first set of Captain Coins to the chest, you’ll be given an Eliksni Quarter Gift Box. Inside the box is a token of appreciation from Mithrax.

Each box contains the following rewards:

In exchange for your hard work for this community event, you can receive a variety of rewards. You’ll need to give away 2,400 treasures to receive all rewards. As the Eliksni Quarter undergoes further development, access to some of these will become available. The following are the personal rewards and the community rewards that you’ll be getting once certain thresholds have been crossed.

Community Goal I: Clean Up

A new page has been added to the Season of Plunder Ritual.

In the Community Event tab, you’ll find the following Triumphs and trackers

How to Progress in A Rising Tide Quest in Destiny 2

Bungie has stated that in order to progress the “A Rising Tide” Quest beyond step 3, Guardians will first need to reach the first Community Goal and then visit the Eliksni Quarter again to see the progress for themselves. At least that’s what the quest menu is telling us is supposed to happen:

Assuming everything goes according to plan, the next step should open up soon and Guardians will be asked to inspect the changes on their next view of the Eliksni Quarter.

You can farm Captain’s Coins from the following activities:

If you’re running with a group, I suggest farming the Daughters of Oryx Encounter in the King’s Fall Raid. You can clear the encounter at a fraction of the time it takes to clear Oryx and with less pressure to perform as well. Also, it should be noted that it doesn’t matter if you clear the encounter on normal or Masters, you’ll still be getting the same amount, no matter what.

There is also the Conflux on Nessus, ever a favorite spot for quick clears. And it so happens that on November 22, the day that this article went live, the Legend Lost Sector just happens to be the Conflux. The other Lost Sectors on Nessus do provide some quick runs in general, if farming is what you’re trying to do.

When Bungie has fixed the issue with other ritual activities, we will try to see if running strikes, gambit, or crucible matches will be better for farming long term. This includes having the Emblem equipped that allows us to get extra Captain’s Coins during these activities.

How to donate Captain’s Coins in Eliksni Community Event

Anyway, check out this video from Youtuber xHOUNDISHx where he goes over the details for the Eliksni Quarter Community Event and its rewards.