A guide on how to clear the Bunker E15 Lost Sector in Destiny 2. 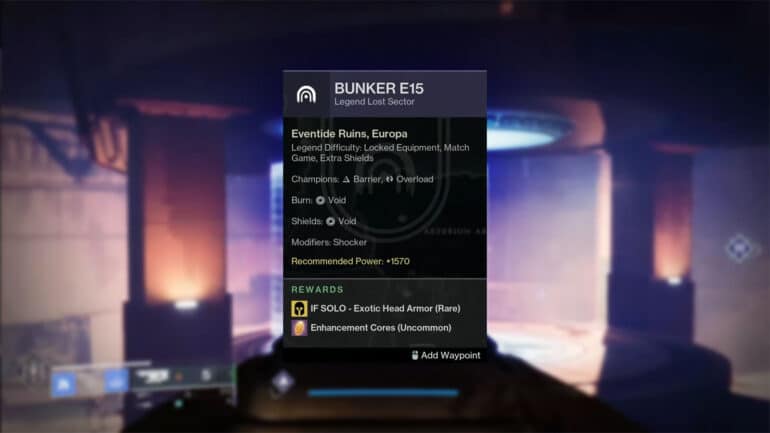 The loot pool for Destiny 2 Bunker E15 has been updated with the recent release of the newest exotic helmet for the Warlock class, the Fallen Sunstar. Players would want to try out this lost sector a go once more as not only would the new helm be a worthy addition to a collection, but it also serves as a more than decent support helm, thanks to its armor perk.

In this guide, we will be going through the Destiny 2 Bunker E15 Lost Sector, giving out tips on how to easily clear it.

The Bunker E15 Lost Sector can be found in Eventide Ruins, Europa. It is hidden well beneath the ruined structures and is heavily patrolled by Vex.

How to prepare for Destiny 2 Bunker E15 Lost Sector

To prepare for Bunker E15, you must first reach at least Power Level 1600 (Master) and up (1570 for Legend). The enemies are shielded with Void and have Void burn, while the champion types are Barrier and Overload, so make sure that your loadout are modded with the following:

All the first four mods will make managing the direct damage output and damage intake to and from the enemies, respectively. The Concussive Dampener will greatly help against the Arc Pools that Goblins leave behind when they die.

Bunker E15 has three major sectors, ending with the boss room. Throughout the bunker are imprisoned BrayTech Security Frames that can be set free by shooting the glowing box on top of the cage. These Frames will then become temporary allies that will help out with clearing the rest of the bunker until the final boss fight.

The Bunker Entrance has the following enemies:

Before heading down into the entrance’s floor, you will find yourself on top of the Overload Champion. Immediately disrupt it then burst it to eliminate it right away, then take care of the rest of the adds. Then, head towards the interior of the bunker.

The Bunker Interior has the following enemies:

Inside the bunker, you will start encountering the cages. Destroy the box on top of them to free up the Frames and join you in the fight. There will be dozens of Goblins in this second section, accompanied by Hobgoblins. Try to take out the bunched up Goblins in one go to limit the area of the Arc Pool that they’ll drop, then you can take care of the Barrier Champion right after.

The Cyclops will then spawn after clearing enough adds. Burst it down straightaway to limit it from causing massive damage, then clear out the remaining adds in the room before proceeding to the boss room.

The boss room has the following enemies:

As you enter the boss room, clear out all the adds and then take down the Wyvern. Immediately after doing so, head back to the entrance of the room as you wait for the boss to spawn, which will also be accompanied by another wave of adds.

As the boss spawns, burst it with your grenades and heavy fire, then try to climb up the platforms on the side of the room where the Frames will be shooting from. Use the barrier on the platform as a shield from the boss’ attacks, as well as to limit the entry of the adds that will be coming at you.

The boss will start summoning additional Overload Champions as its health reaches its thresholds, to a maximum of 4 champions during the fight. Depending on your damage output towards the boss, you can completely skip dealing with the champions if the boss is bursted hard enough to kill it in a short time. Once the boss has been defeated, collect your rewards from the chest and you have completed the Lost Sector. Congratulations!

Check out this video by ItsJustSideways showing how to clear the Bunker E15 Lost Sector: