A guide on how to complete the Presage Exotic Quest and get the Dead Man's Tale in Destiny 2. 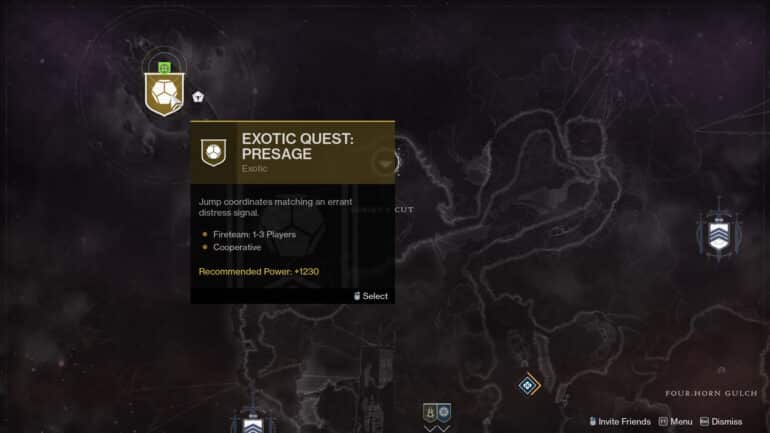 Presage is an Exotic Quest included in the Destiny 2 Season of the Chosen season pass where you are tasked to board the derelict ship Glykon in search of a missing Guardian.

It’s a quest that challenges a player’s abilities to look for levers, fuses, and panels to get through the different sections of the ship. Players will also have to go against time in certain parts of the quest which adds more pressure on top of the challenge. At the end of what is seemingly an endless maze waits a neat looking scout rifle.

In this guide, we will look into the objectives of the Presage Exotic Quest and share tips on how to navigate through its sections.

How to Complete the Presage Exotic Quest in Destiny 2?

We will go over the quest objectives and focus on the important parts within them.

Make your way into the Glykon by traversing over the pipes an platforms until you find a vent that leads into the ship.

Look for Levers, Panels, and Fuses

It is all about looking for levers and panels once you are within Glykon. Make your way through the maze of vents and rooms inside the ship and always be on the look out for vent panels on the walls that you can shoot down to access the vents. Pay attention to some glowing fuses that you can shoot to break in order to open locked doors or temporarily shut down barriers.

Shoot these glowing spores to gain the Egregore Link buff that allows passing through darkness barriers. Make sure that you are close to the spore once it bursts to get the buff. The buff only lasts for a few seconds, so make sure to not linger around for too long in the darkness as it deals a very quick tick damage that can kill you in seconds. You can shoot at the spores once more to refresh the buff.

Find several levers located near the room to open panels. A lever attached to a cylinder near the electric barriers will open a panel revealing a fuse that you need to break in order to access the next section.

Upon activating the lever, enemies will start coming in. Clear them out right away and shoot the metal grates on the ground to reveal fuses. Shoot 3 of these fuses to break then and to stop the trash compactor and reveal an accessway on the floor.

Pioritize breaking the fuse farthest away from the lever as it is near the moving walls. Once it gets covered by the wall, it cannot be accessed anymore leading to immediate failure.

After the fight, head towards the outside of the bay and use the platforms to traverse towards the adjacent bay to find another accessway.

You will end up in a vent system where you can shoot down panels to pass through different sections. Find the panel hiding some glowing spores behind it and from there facing away from the spores, head forwards then turn left on the third vent.

Turn left again and head straight, then turn right to see the darkness barrier that you have to go through. This will send you back to the room with the glass panels. Get the Egregore Link buff once more and go to the door that leads to the other side of the glass panels.

How to Defeat Locus of Communion Boss Fight in Destiny 2?

The Locus of Communion will be on the upper level of the room on the first part of the fight and will then move down to the lower level. You must first turn off the heating in the lower sections before you can move down and follow the boss.

In this room, there are terminals that you can activate to turn off the heating in the lower level. One terminal is within the heated room itself, so you must either use a super to help you tank the heat, or just zip through it and make sure to activate the terminal in time before your health runs out.

Check out this video by Ebontis on how to complete the Presage Exotic Quest: