A guide on how to defeat the Vitaath Helliquary Raid in Diablo Immortal. 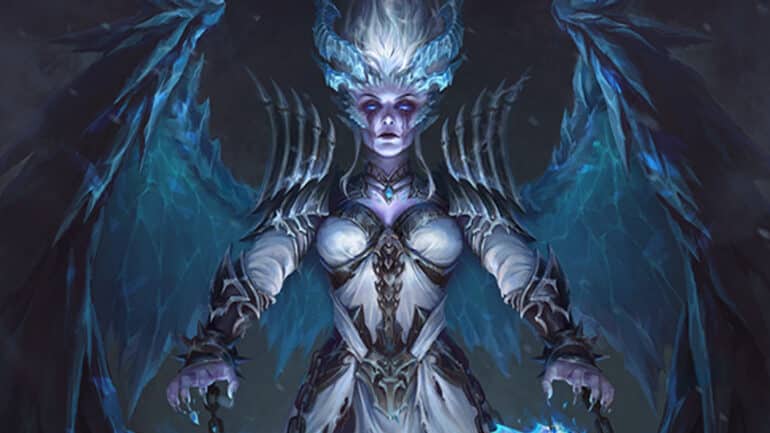 Vitaath is the second Wrathborne Demon that players can fight in the Helliquary. She harnesses the power of freezing magic and can easily demolish unprepared parties with her icicles and freezing aura.

In this guide, we will talk about how to clear the Vitaath Helliquary Raid and share some tips on how to make the fight more manageable.

How to Unlock the Helliquary in Diablo Immortal

The Helliquary can be unlocked by completing the Library of Zoltun Kulle section of the campaign. Once completed, head back to Westmarch and talk to Deckard Cain. He will then introduce you to Rayek who is the inventor of the Helliquary which allows you to track down Wrathborne Demons.

How to prepare for Vitaath, The Shivering Death

Vitaath, The Shivering Death is the second boss that can be fought using the Helliquary, and understandably a way harder challenge than Lassal. In order to unlock Vitaath, you must first defeat all three levels of Lassal’s raid. If you need a guide on how to level up your Helliquary, check out our How to Get Hellfire Scoria in Diablo Immortal where you will know how to get Hellfire Scoria used in leveling up the Helliquary.

In order to challenge Vitaath, you must first reach a Combat Rating of at least 2280.

The Vitaath Raid requires a total of 8 people. It is recommended to play with an established or leveled up warband to get certain buffs such as revive speed boosts.

Vitaath’s Helliquary entrance can be found at the Demon Portal at the Central Square in Westmarch.

Bonus Scoria can be acquired if a Helliquary Raid is cleared with a Warband, which amounts to double the amount of Scoria obtained from a non-Warband raid. Consider creating or joining a Warband first before doing any raids to maximize your weekly Scoria gain.

Vitaath’s Helliquarry raid starts off with a mob spawns, followed by a 4-phase fight.

Upon starting the raid, you will first have to fight her mobs:

Once they’re defeated, Vitaath will show up and the main raid will start.

On the first phase, Vitaath will do her regular slashing attacks along with her specials:

Once her first HP bar has been depleted, she will move on to phase 2 where she will summon more of her adds. Some of the adds that she summons are her Icy Clones; as long as her clones are alive, Vitaath will remain immune to damage, so make sure to clear them out as soon as possible.

She will also conjure three ice crystals that shoot out freezing air at nearby players.

On her third phase, she will add these attacks to her set:

On her final phase, she will continue doing her previous attacks and even summoning more adds, plus she will start doing these attacks:

Players will get rewarded with these items after defeating Vitaath:

These rewards can only be received once every raid, but the rewards get reset twice a week so you will have two attempts of getting them within a week.

Check out this video by ECHO Gaming Diablo giving a sneak peek on what to expect in the Vitaath raid: