A guide on how to defeat Flying Dragon Agheel in Elden Ring. 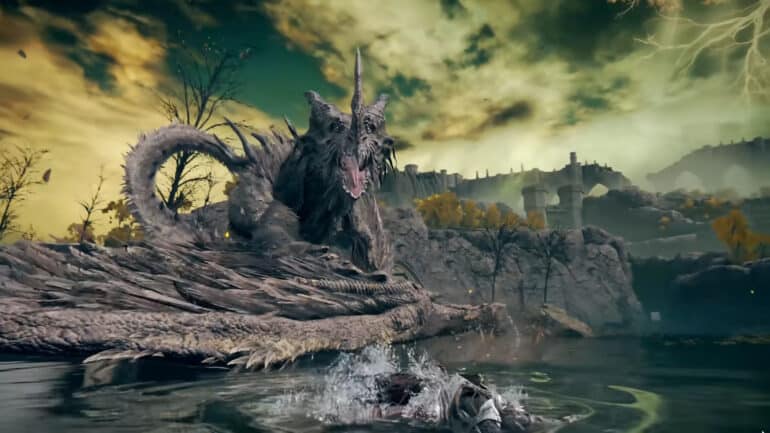 Flying Dragon Agheel in Elden Ring is one of the mini-bosses that players can fight in the game. It is one of the early bosses that can be encountered out in the open area of Arkesia, and is also one of the most popular bosses since its inclusion in the closed network test.

In this guide, we will look into Flying Dragon Agheel’s encounter, check out its attacks and move sets, and share some tips and strats on how to defeat this dragon.

Who is Flying Dragon Agheel?

Agheel is one of the dragons that can be encountered in Elden Ring. Defeating Flying Dragon is completely optional and not necessary to progress through the story, but slaying it will reward you with a valuable item and some runes.

How to Summon Flying Dragon Agheel

To summon Flying Dragon Agheel, you need to travel to the Dragon-Burnt Ruins in Limgrave and stay there for a couple of minutes. You will then hear a loud roar from a distance, signaling its arrival as it swoops down the area.

Since Agheel appears in the overworld, you can ride your mount Torrent into battle. It is highly recommended that you do so because most of its fire attacks and its dive attack move too fast to avoid on foot if you’re caught in a bad position. Using Torrent can easily give you a quick getaway in these kinds of situations.

Keep in mind that whenever you are on Torrent, any damage that goes your way will go to Torrent instead. Enough damage will get Torrent killed during a fight. You can revive it using a flask, but there will be a confirmation box that will show up and that might mess up your flow during the boss fight.

Agheel can swing its head or its entire body to the player’s direction to do a bite. This attack usually happens when the player is positioned in front of it in close range.

If you are a melee attacker, you would want to make sure to stay clear of its head unless it is committed on doing an attack, like the Fire Breath. Positioning near its chest can help, though you would also have to look out for its Leg Stomp attack.

Agheel will lift its leg closest to the enemy and then stomp the ground, releasing a small shockwave around it.

Dodge accordingly as soon as a leg lifts. The shockwave is small enough that it can be cleared in a single dodgeroll.

Agheel can do this attack if the player is underneath or within close range and after doing Leg Stomps. It will sprint forward a bit and then swing its entire body 180 degrees.

Be careful when going underneath it so as not to get trampled. Torrent can only sprint once you are not doing any attacks, so limit your hits to two strikes and anticipate what the next attack will be to properly dodge it.

Agheel’s mouth will start flaming and shoots out a stream of flames at the player’s position. Its head can track down the player slowly during this attack.

As soon as the flames show, run towards the left or the right on Torrent. You can also go on a diagonal path towards Agheel as its head’s pivoting is slow enough that the flames won’t reach you. This attack is one of the best openings to try and hit its head with heavy attacks to stagger it.

Agheel’s mouth will start flaming as it flies up and backwards a bit. It will then shoot out flames downwards in a wide cone.

Similar to the Fire Breath, get on Torrent as soon as you see the flames and get away from Agheel and where the flames will hit. Running towards it during this attack even on Torrent will still have a risk of getting hit by the flames because it will also be flying backwards by some distance.

Agheel will launch itself upwards and back, and then its mouth will start start flaming. It will then fly forwards and shoot out flames downwards on its left side.

Since Agheel will be shooting out flames more towards its left (your right facing it) and not straight down, run towards your left to avoid getting hit by the flames.

Agheel will fly upwards, hang in the air for a few moments, and then dive down to your position.

The safest way to avoid this attack is to just run away from Agheel on Torrent as the dive only has limited range. Running towards it or dodging at the last moment is possible and preferable if you want to immediately do a counter-attack, but it requires perfect timing as the dive happens very quickly.

Here are additional tips on how you can beat Flying Dragon Agheel in Elden Ring:

What are Dragon Hearts for in Elden Ring?

Defeating Flying Dragon Agheel will unlock the Agheel’s Flame incantation at the Cathedral of Dragon Communion. This incantation can be exchanged for 2 Dragon Hearts, so you will have to slay another dragon for it.

Check out this video by Kibbles – (Video Game DataBank) talking about tips and tricks to defeat Agheel: