A guide on how to play in the Volcanic Heart Map of the Crystalline Conflict game mode in Final Fantasy XIV. 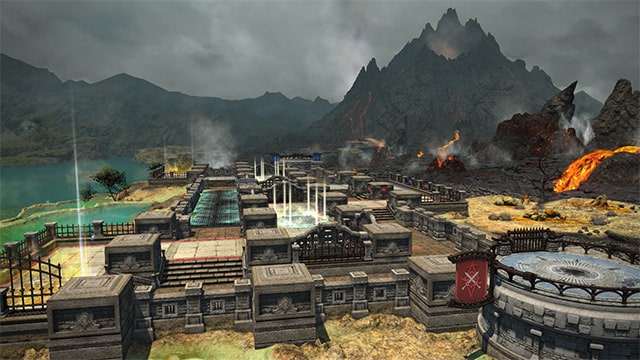 The FFXIV Volcanic Heart is the newest of the playable maps in Final Fantasy XIV’s Crystalline Conflict mode. The Volcanic Heart map brings a different kind of challenge thanks to both of its dynamic and static obstacles. Anyone who would like to dominate and thrive in this map should definitely learn how to use the lay of the land and its obstacles to their advantage.

In this guide, we will talk more about the Volcanic Heart map, its layout, its obstacles, and what are the things to pay attention to in order to win matches in this map.

In your Duty Finder, you can check if the current Crystalline Conflict matches are being hosted on a specific map, in this case, the Volcanic Heart map. Under Regular Duty > Crystalline Conflict, you can choose to play a casual or a ranked match. Selecting any of these will show you the details of the match, as well as the current and next arena of where the matches will be played.

Currently, there are only three maps and they rotate every 90 minutes, so if you want to play specifically on the Volcanic Map, simply check your Duty Finder and see if it is set as the current map. Otherwise, you will have to wait until the maps get rotated.

The Volcanic Heart map can be summarized as a long angled loop map with player goals at the the farthest ends, and running across this loop is the lane that the tactical crystal moves on. It is essentially a 3-lane map, except that the crystal’s lane is intertwined with the other two.

Players will also find Medicine Kits in certain parts of the map that will heal 30,000 HP upon pickup.

The FFXIV Volcanic Heart Map has two obstacles worth noting that will shake up the Crystalline Conflict gameplay. These are the square pillars that line up the crystal’s lane and the map’s arena event called Eruption.

The square pillars are the static obstacles of the Volcanic Heart map. Though they are present in every lane, including the map’s playable edges, the ones that pose as the game-affecting obstacles are the ones that are in the middle of the map lining up both sides of the crystal’s lane.

Simply put, these pillars can serve as cover or hindrance depending on your situation, so you should know how to work your way around these obstacles.

During a match, the volcano will erupt, sending out Bombs on different parts of the map. Players will see these Bombs slowly touch the ground and their explosion range can also be seen to span as far as 4 blocks of map space in a cross pattern, similar to the explosion pattern seen in Bomberman games.

Once it self-destructs, players who get caught in its explosion will take a huge amount of damage, so make sure that you stay away from its explosion range, or pop your Guard skill. These Bombs can also be used offensively by stunning or binding opponents if they are in the explosion range.

After the Bomb explodes, it will leave its core on the ground which can be picked up to gain the Hardcore buff. This is a stackable buff (up to 10 times) that will give the bearer increased attack damage which can be useful to perform a counterattack when being chased. Another benefit of picking up a buff is it also increases the Limit Break gauge, so be sure to pick one up for your own use, or just even to deny your opponent from the buff.

If you like this Guide, be sure to check out our other Final Fantasy XIV articles here:

Check out this video by Mrhappy1227 talking about some tips and tricks on how to play Crystalline Conflict: