Guide for the Genshin Impact Starry Night Chapter is here 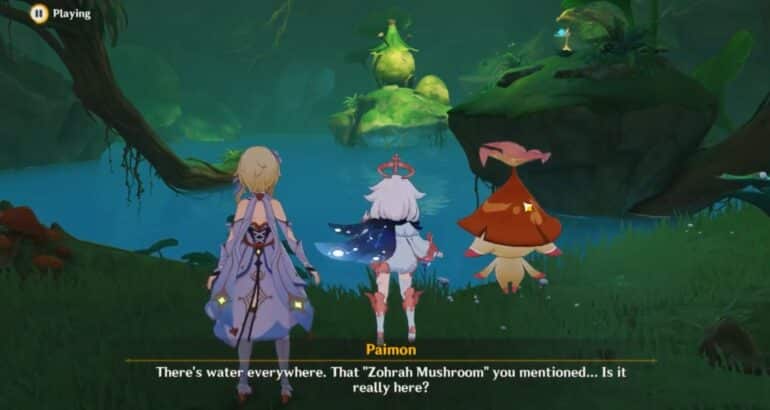 How To Start Starry Night Chapter in Genshin Impact

To start this quest, players must complete Arakanya: Part II’s quest, The World of Aranara. After that, they will need to head straight to Sumeru by teleporting themselves to the Statue of The Seven west of that area and talk to the Eremites by the campfire.

After talking to Lunja and her friends in the camp, a strange mushroom-like creature named Aranakin will approach and will ask players to look for her fellow kin, Araska. Equip the kusava that was given to try to locate her using the markers found in the game.

Using the kusava will allow players to summon Aranakin to the monument, which restores it back to its proper form. Use Dendro elements to activate the restored monument to open up the path.

Once the broken monument is repaired, head towards the cave below the road and players will find a hidden area where there is a lake. Players will need to lower the water level inside the cave in order to get to the next location.

After fixing all the broken monuments and sinking the water level within the cave and opening the chest, head to the exit of the cave by climbing upwards. Upon leaving the cave there will be broken monuments around your path so make sure to fix them before leaving. After which, leave the area by using the Four-Leaf Sigils on the Clusterleaves nearby. Inside the opening, you’ll see a bouncy mushroom that will take you to another Clusterleaves surrounded by Dendro bombs.

Once you manage to fix all the broken monuments and leave the cave, Lunja and her friends will begin to ambush you as enemies. Defeat them quickly and you will complete the quest.

Upon completing the quest, players will receive these rewards that will suit them in the near future.

The Rhythm of Revival can be played with your Vintage Lyre and this enables you to fix broken monuments similar to the ones in the quest.

Check out as well this video gameplay of Wow Quests to see the Genshin Impact Starry Night Chapter Walkthrough.