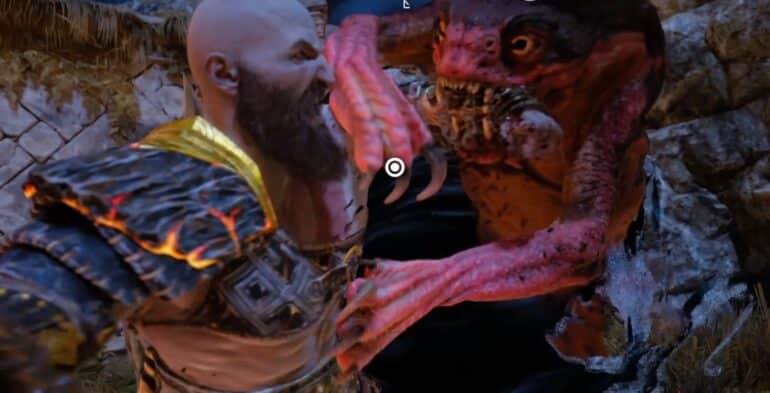 The Lost Lindwyrms is among the various favors you can find in God of War Ragnarok. In an effort to rid the curse that bonds Freya to Midgard, Kratos agrees to go to Vanaheim with her and destroy its source. Unfortunately for everyone involved, Odin used a part of Yggdrasil in the curse. This forces the tree’s guardian, Niohogg, to be aggressive against anyone who approached the curse. Freya and Kratos were left with no choice but to kill her. And now her children are running amok across the realms.

In this guide, we will tell you all the Lyndworm’s locations and how you can get to them. The quest starts sometime after freeing Freya, where Ratatoskr asks Kratos to look for the lost ones.

For this Favor, Kratos uses the Lindwyrm Trap. A trap provided by Ratatoskr to capture Lindwyrms.

The rewards for capturing each one are:

The first Lindwyrm can be found at the top of the Forge after The Lady forged the Draupnir Spear. In a series of test cases, Brok tasks Kratos to blow up rock and create access points using the spear. The optional test is to make a way to the top of a rock and that is where the first portal and lindwyrm are.

The second Lindwyrm can be found near the end of Alberich Hollow. You can also do this quest while doing the “Lost Treasure” Favor. You’ll have to fight the Ormstunga mini-boss first in the area first.

The third Lindwyrm can be found on Alberich Island. To get to it, you’ll need to solve a short puzzle with the spear and freezing a gate from moving. It’s also on the way to completing the “Lost Treasure” Favor.

The fourth Lindwyrm can be found in a side area of the Applecore that can only be accessed by throwing the Draupnir Spear into a weak point and creating a bar to get to the high ground where the rift is. It’s also close to a Mystic Gateway.

The fifth Lindwyrm is located in the Plains region of Vanaheim. The Yggdrasil Rift can be found a little north of the Celestial Altar. You’ll need to get rid of the Seidr in the area before interacting with it.

The sixth and final Lindwyrm is located in the same Plains region of Vanaheim. It is on the way to completing the “For Vanaheim” Favor. In the same arena where Kratos fights the Crimson Dread. North of the arena is a wall where the portal is. Retrieve the Lindwyrm and then head back to Ratatoskr.

There is no big reward at the end of this one. You were the reason why this happened in the first place after all. But that’s for Kratos. For players, they get something more important to them, the Rightful Place silver trophy.

Watch this video by RetroGAMEz featuring The Lost Lindwyrms (The Forge) Locations in God of War Ragnarok: