A guide on how to defeat Avalugg, The Lord of the Tundra. 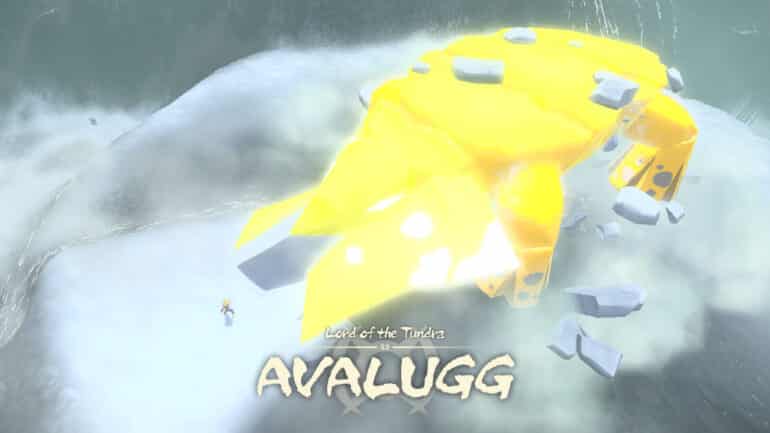 Avalugg is the fifth and final frenzied noble that you’ll have to face in the land of Hisui in Pokémon Legends: Arceus. Your dodging skills will be put to the ultimate test as Avalugg will relentlessly send out attacks upon attacks, leaving you with little to almost no window to react. In this guide, we will look into his attack patterns and learn how to quell this frenzied Lord of the Tundra.

You venture on to the Alabaster Icelands as you learn about the news that its noble Avalugg has also been struck by the mysterious lightning and has become frenzied. Though it has not caused any trouble in the area yet, you decide to do the preventive action to quell it. Avalugg’s warden, Gaeric, opposes this idea and challenges you to a battle to test your intention. After defeating Gaeric, he lets you challenge Avalugg at the Icepeak Arena.

How to Beat Avalugg Boss Fight

Like with all the previous nobles, you’ll have to throw balms to calm it down and quell its frenzy. This time, however, Avalugg will just be standing in place while you stand on top of a ledge because of how huge the noble is.

Avalugg’s Attacks and How to Avoid Them

Avalugg shoots out balls of ice while sweeping its head from side to side. The balls of ice then slowly move forward in diagonal alignments, forming a zigzag shooting pattern.

How to avoid: Avalugg moves its head from one side to the other while shooting out the ice balls, and then takes a pause before shooting the next row. This pause leaves an opening in between the rows which you can easily just run through. By positioning far away from Avalugg, you can properly see the pattern and the safe spots through which you can pass through.

In later rounds, he will do this move in tandem with the upgraded ice spikes which either leaves smaller spikes that linger on the ground, or he will intentionally shoot these spikes on areas where the gaps will be at. In case you find yourself trapped, you can simply dodge towards the ice balls.

Avalugg will open its mouth and mandibles as rows of ice spikes jut out from the ground in succession. In later rounds, these spikes will leave smaller spikes on the ground that will linger for a while. This attack also has another variation in which ice spikes will show up in the section of the ledge nearest to Avalugg.

How to avoid: In the first round, he will shoot out the spikes in the middle part, and then to one of the sides, and then to the opposite side. Swirling frost will start showing up on the spot where a spike will rise so you can see what spots to avoid. On the other variant of this move, simply move back a bit towards the middle of the arena to avoid getting hit.

During the final round, Avalugg will shoot out three spikes that are spaced apart towards the middle. These spikes will leave patches of spikes that deal damage when you step on them. Make sure to position yourself in between the gaps of the spikes so that they won’t get in the way of your dodging.

Avalugg will create shards of ice from its back and hurl them towards you.

How to avoid: Time your dodges properly, dodge only when it’s about to hit you. You’ll see clouds of ice forming on Avalugg’s back as a signal that this will be his next move. The shards home in on you so dodging just a bit too early and the ice shard will still manage to hit you as you exit your dodge. Avalugg will shoot out four to six shards in succession so listen to the sound cue as the shards shoot out from his back.

The timing between the shards gets tighter in the latter round, so make sure to stay on top of your dodges, or else you might get hit multiple times from the barrage.

Avalugg will move closer to you, moves his head to one side, and shoots an ice beam as he sweeps his head to the other side.

How to avoid: Simply dodge across the beam as it sweeps towards you. The beam will take around three seconds to charge, so you will have ample time to react to it. After doing an ice beam, Avalugg will be incapacitated and you’ll be able to send your Pokémon into battle.

Avalugg Weaknesses and How to Counter

Hisuian Avalugg has an Ice/Rock typing, which makes it four times weak against Fighting and Steel attacks. It is also weak against Rock, Ground, Water, and Grass attacks. The Avalugg that you’ll be facing is at level 56.

You can capture an Alpha Lucario at the Icebound Falls and use its Fighting and Steel attacks against Avalugg. Other Fighting types recommended are Hisuian Lilligant, Machamp, and Gallade. You can also catch Bronzong, Empoleon, or Probopass for their Steel attacks.

Avalugg can also be beaten just by using balms alone, though it will definitely require more skill to sneak in throws while dodging its myriad of attacks.

Once Avalugg has Once Electrode’s frenzy has been quelled, it will come back to its senses and give you the Icicle Plate, an item used by Arceus to gain the power of the Ice type.

Can this Avalugg be Captured?

No, he can’t be captured since he’s one of the noble Pokémon. If you want to get your own Hisuian Avalugg, you can capture Bergmites around Avalugg’s Legacy in the Alabaster Icelands and simply raise it up to level 37 to trigger its evolution.

Check out this video by WoW Quests on defeating Avalugg: