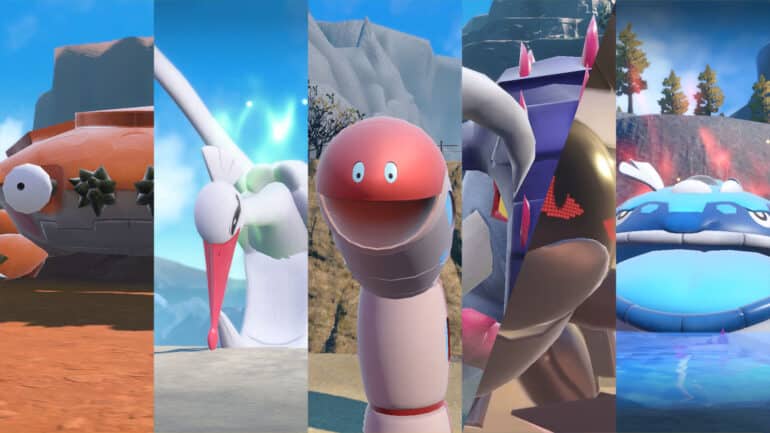 The Path of Legends is one of the story lines that players can follow while playing Pokémon Scarlet and Violet. In this story, players will follow the journey of finding the titans, Pokémon that have grown inexplicably larger than normal, and revealing the secrets of how they came to be.

In this guide, we will go through the Path of Legends, talk about the Pokémon Titan encounters, and share some tips and tricks on how to make the journey easy.

How to start the Path of Legends

In the first parts of the game, you’ll be talking to a bunch of characters. One of these characters is Arven, a senior in the academy, and is in search of the mythical Herba Mystica that are somehow connected to the Titans. After talking to him, you’ll then be able to follow the Path of Legends story line.

How to Complete the Path of Legends

Being an open-world game, you’re allowed to complete the Path of Legends in whichever order you like. However, there is a certain titan in the middle of a lake that can only be visited once your Bike-mon learns how to swim; a skill that can be learned as you defeat a particular titan.

There is a recommended path that you can take that is based on the difficulty of each titan, and it goes like this:

This path will require you to cross both sides of the island multiple times which will make the journey longer. A shorter path to follow is to defeat Klawf and Orthworm first, then cross to the west side to defeat Bombirdier and the rest of the titans.

Each fight will consist of two phases. After the first phase is done, you will need to chase down the titan to its next destination. You’ll then get a cutscene showing them eating Herba Mystica which empowers them even more. The fight then proceeds to a 2 vs 1 match as Arven joins in to help defeat the titan. After defeating it for the second time, you’ll then be able to head inside the cave they opened to get a sample of the Herba Mystica.

Each Herba Mystica will bring back the abilities of Koraidon and Miraidon, allowing them to be more helpful wen traversing the land. Both of them will only be able to get the ability to swim once they have eaten the Bitter Herba Mystica, hence why the False Dragon Titans can only be encountered after defeating the Open Sky Titan.

The Stony Cliff Titan is a Klawf that has grown abnormally large. It can be found in the South Province (Area Three) clinging on a side of a cliff. It is a Rock-type Pokémon and it is recommended to confront it with at least a level 16 Pokémon. Defeating it will allow you to get the Sweet Herba Mystica that gives the dash ability.

The Open Sky Titan is a Bombardier that has grown large enough that it can carry huge boulders with its feather sling. It can be found in the West Province (Area One) on top of a mountain. It drops down boulders on the side of the mountain which you need to avoid while hiking upwards. It is a Flying/Dark-type Pokémon and it is recommended to confront it with at least a level 19 Pokémon. Defeating it will allow you to get the Bitter Herba Mystica that gives the swim ability.

The Lurking Steel Titan is an Orthworm the has grown big enough that it creates big tunnels when burrowing in the ground. It can be found in the East Province (Area Three) in one of the quarry pits. It is a Steel-type Pokémon and it is recommended to confront it with at least a level 28 Pokémon. Defeating it will allow you to get the Salty Herba Mystica that gives the high jump ability.

The Quaking Earth Titan is either a Great Tusk (Scarlet) or an Iron Treads (Violet) that roams the sands of the Asado Desert. It’s the only Pokémon among the titans that is considered as a Paradox Pokémon. It can be found on the west side of the Asado Desert. Great Tusk is a Ground/Fighting-type while Iron Treads is a Ground/Steel-type Pokémon and it is recommended to confront it with at least a level 44 Pokémon. Defeating it will allow you to get the Sour Herba Mystica that gives the glide ability.

The False Dragon Titan is a Dondozo that swims the depths of Casseroya Lake. Due to munching on Herba Mystica, even the Tatsugiri that it engulfed managed to get powered up by the plant, causing it gain titan strength while staying the same size. Dondozo is a Water-type while Tatsugiri is a Dragon/Water-type Pokémon. It is recommended to confront them with at least a level 55 Pokémon. Defeating it will allow you to get the Spicy Herba Mystica that gives the climb ability.

After defeating all the titans, Arven will then invite you back to where the old lab was near Inlet Grotto. He will then decide on having a Pokémon battle with you, even his recently recovered partner Mabosstiff is willing to join the battle. Prepare to fight these Pokémon in his roster:

Once you succeed in defeating Arven, he will then ask you who else you should ask to join your group to venture into the Great Crater. You can pick anyone between Nemona or Penny. You’ll then get the screen showing that you have completed the Path of Legends.