A guide on how to get the Rhenoplos Egg in Monster Hunter Rise. 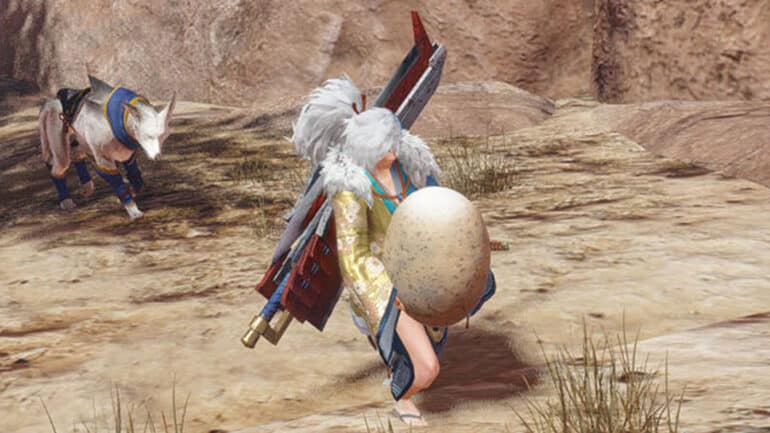 One of the quests that Yomogi has is to bring her back a Rhenoplos Egg from the Sandy Plains as she is trying to make a new dango dish out of it. As like in many of the past delivery quests, carrying one huge egg back to the safety of the base camp can be quite dangerous with all the hostile monsters that you can encounter on the way back.

In this guide, we will talk about the Rhenoplos Egg and the quest that requires it, and what the best path is to complete it as safe and quickly as possible.

As you talk and complete quests from Yomogi, you’ll eventually be asked to complete the Bunny Dango – with Eggs! quest which requires you to deliver a Rhenoplos Egg back to base camp.

Completing this quest will unlock the Dizzybloom Dango which you can add to your dango orders. This dango will makes it easier for you to stun monsters, which works great if you want to get some more mileage with a stun build.

Starting from the base camp (or the sub-camp 1 if you have it unlocked), head towards Area 11 and fall down into the Rhenoplos den. If you find Peepersects, pick them up or use a Dash Juice to help with your stamina meter. Go to the nest near the tree and pick up the Rhenoplos egg which will show up as a Herbivore Egg.

Once you pick it up, go towards Area 6 and be careful about the roaming monsters. You can still climb up the vines while holding the egg; you can even speed climb as long as your stamina permits. Normally, the other Rhenoplos that you pass by are either asleep or not aggressive. If they are aggressive towards you, side step away from their path as soon as they charge.

Once you reach the camp, deliver the egg to the supply box and you can end the quest. Talk back to Yomogi to complete the quest and unlock the reward.

Check out this video by Sherwin Sosa showing how to find the Rhenoplos Egg: