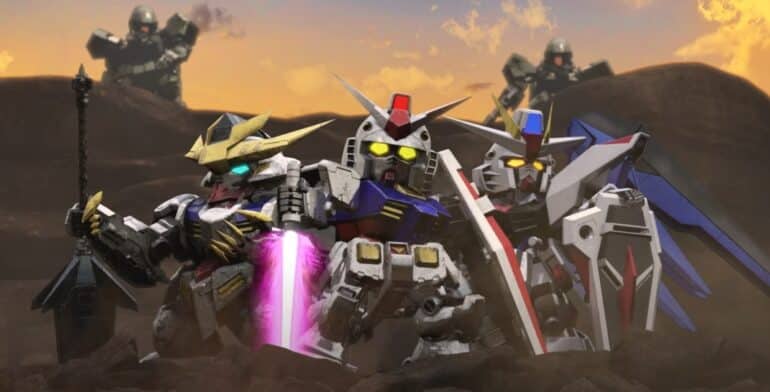 If players develop and obtain a reassuring fellow MS who will fight with the main character in the mission, a wingman can be set and will be added in addition to the aircraft operated by the player, and up to 2 aircraft can be set. Various merits are created by forming an alliance

Allies whose HP has become 0 can be rescued by restoring nearby. Even when you are defeated, you may be able to restore from a wingman. Try different combinations that can cause special conversations when you set up wingmen for specific characters

When you organize a wingman and sortie into a mission, the “Alliance Effect” that increases the status value is activated, and the ability value that increases with the roll of the wingman that lasts as long as the wingman is alive changes, so find your battle style the one that suits you.

In the Battle Alliance, you can strengthen your own MS by strengthening the stats of MS and equipping expansion parts with enhancement options. Strengthen your favorite MS and create your own strongest MS.

Mobile Suits that have completed development can use capital to strengthen their stats. Even if you have strengthened your stats once, you can convert your stats to tune points according to your play style and reassign them

During the mission, you may be able to obtain expansion parts that can be equipped to the aircraft from the enemy aircraft or from the container. Expansion parts have various effects including “plus effect” and “minus effect“, and the ability value that is a drawback is It is also possible to further sharpen the characteristics of the aircraft while aiming for strengthening

Pilot skills are possible to develop characteristics that can not be supplemented only by strengthening the MS. Players can participate in missions and level up by gaining experience as a hero’s pilot. By participating in missions and accumulating experience points obtained by defeating enemies, the level of the pilots will rise. The higher the level, the more pilot skills you can use.

Bio: Known as the RED COMET and the greatest rival of Amuro Ray. He is willing to do whatever means are necessary for his goals to be accomplished even if it means sacrificing his loved ones and comrades. He uses a series of customed mobile suits suited to his style of fighting and is relentless

Bio: A boy who was involved in the battle over Laplace’s Box from the encounter with Audrey Burne. As he travels through the coordinates indicated by the box key Unicorn Gundam , he grows up as a NEWTYPE.

Bio: After learning the fate of “Laplace’s Box”, he returned to the army to prevent the release of the box at the behest of his father

Bio: An Ace pilot of the space pirate “Crossbone Vanguard”.
However, his true identity is “Seabook Arno,” who once played an active part in the Cosmo Babylonia War.

Bio: He is a user of the school of the Undefeated of the East and has the title of “King of Heart”, a proof of being the champion of colony martial arts. In order to take away the Ultimate Gundam developed for the purpose of regenerating the global environment, transform it into a devil’s mobile suit “Devil Gundam”, and recover from the brother Kyoji Kasshu who escaped to the earth.

Bio: The founder of the school of the Undefeated of the East and the predecessor of the shuffle alliance “King of Hearts”. As a result of witnessing the devastating earth as the destruction of the global environment by Gundam Fight becomes more serious, He is aiming to eliminate stupid human beings who continue to destroy the environment.

Bio: The general commander of the orbital fleet “Gingham Fleet” and the descendant of the Ghingham family who commands the martial arts in the lunar society. He disagrees with the Earth migration plan and raises anti-Diana, trying to reconcile with the Earth and pursue the path to peace.

Bio: A pilot candidate who attends a “Capital Guard” training school. During training at his training school, he was attacked by space pirates and met the mysterious G-Self.

Bio: Captain of the elite unit “Cruse Corps” of the Zaft Army. He is trusted by the chairman of the Plant Supreme Council, Patrick Zala, and is calm and has a high level of command. Though he is loyal to the ZAFT, he secretly plans to eliminate humankind, Naturals & Coordinators alike, and engage in a bloody nuclear war against each other.

Bio: He is a pilot of the new battleship “Minerva” of the Zaft Army, and has a strict attitude and calm judgment.

Bio: The pilot of Justice Gundam who was active in the previous war. After the Earth Alliance raided on the Orb, he decides to return to the Zaft Army. He initially disagreed with Kira and Cagalli on intervening in the battle but escaped from the Zaft army due to distrust of Chairman Durandal.

Bio: A Gundam Meister that awakened to become a true Innovator. The destruction of the abandoned ship that drifted to the Earth’s sphere triggered the attack on the extraterrestrial mutant metal known as “ELS”, and in order to interact with ELS as an innovator, he tried a Trans-Am burst, but his brain was damaged.

Bio: One of the “Innovades” created by imitating the evolved human “Innovators” to carry out Aeolia Schenberg plans. Immediately before the establishment of the Earth Federation, he took control of Celestial Being’s quantum arithmetic processing system Vedas, so he operates A-Laws from behind and aims to rule humankind.

With all this info about what to expect and more, BANDAI also released the official opening video of the game. The game song is titled, “Ikusei Frost Universe” & was produced by the artist “Powerless feat. Shishi Gami”