Getting meat can be extremely demanding in Star Ocean. 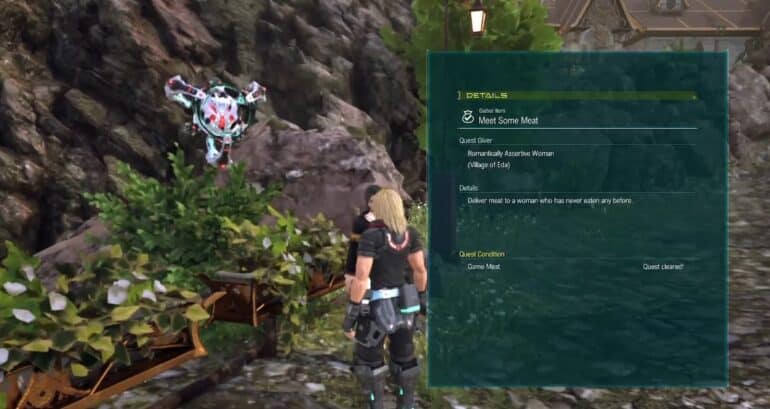 Meet Some Meat is one of the most challenging side quest in Star Ocean: The Divine Force. This one’s pretty straightforward, but needs a bit of a grind since it involves farming and killing a bunch of enemies. In this guide, we will teach players how to complete this quest and what rewards will players earn from completion.

How to Start the Meet Some Meat Side Quest

To Start this quest, players must head to the Village of Eda in Chapter 2, then find an NPC called Romantically Assertive Woman. Talk to her as she will ask players to deliver 3 Game Meats. This side mission will begin as soon as you accept her request.

How to Complete the Meet Some Meat Side Quest

Among the farming requests in the game, finding game meat is hard. The best way to get this is by going to the Hallowed Mount Galca-Lemthas but players won’t be able to access it till the next chapter.

Another way of getting game meat is to defeat a certain type of enemy found in the Del’vyr Region known as the Hayagriva. Additionally, another enemy that players can fight to get game meat is the Dual-Wielding Kelpie, a stronger and fiercer version of the Hayagriva. They can be found in the Edahli Region and their drop rates are very low so players must be vigilant and defeat several of them. Once players have the amount of meat needed, return back to the client and complete the quest.

Meet Some Meat Side Quest Rewards

After completing the quest, players will receive the following rewards that will benefit players in their future endeavors in Star Ocean The Divine Force:

That’s our guide for the Meet the Meat quest in Star Ocean: The Divine Force. For more Star Ocean Divine Force content, players can visit our previous articles below to get to know more about the game:

Watch this video walkthrough by jimajamer to see how to complete Star Ocean: The Divine Force Meet The Meat Side Quest.