V Rising Nicholaus the Fallen Location & How to Beat

A guide on how to defeat Nicholaus the Fallen in V Rising. 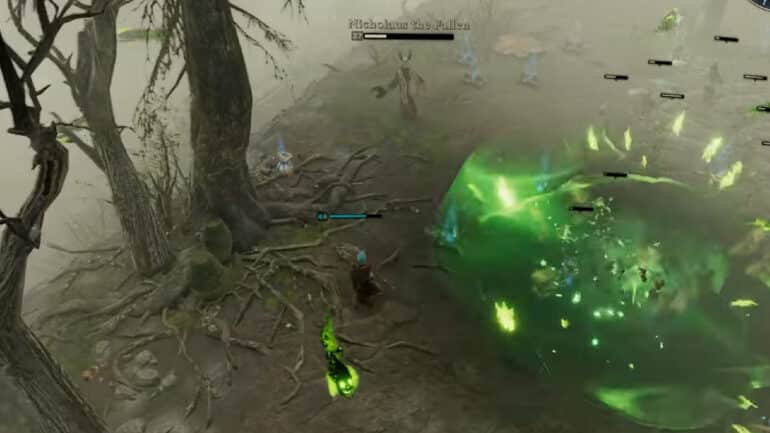 V Rising Nicholaus the Fallen is one of the bosses that can be fought in the game. He uses the power of necromancy to summon his undead horde of skeletons to do his bidding. Defeating him unlocks a structure that is vital to the mid-tier progression.

In this guide, we will talk about how to prepare and win the fight against Nicholaus the Fallen.

Nicholaus the Fallen can be found at the highest point of the Forgotten Cemetery, in the middle of the Farbane Woods. There are many necromancers in the area that can mob you down with their summons, so be careful.

How to beat Nicholaus the Fallen

To defeat Nicholaus the Fallen, first make sure to level up your total gear level to at least 37. You can equip these gear:

You can also get the Merciless Nightstalker set since their recipes can be picked up as a random drop from level +30 enemies or from randomly getting them as an unlocked technology from the Research Desk.

If you are fighting Nicholaus for the first time, it’s recommended to use the following abilities:

Nicholaus specializes in raising the dead and amassing an army to create some distance between you and himself. Luckily, the skeleton army that he makes moves slower than the regular skeleton soldiers, so they do not pose as much threat, unless you are not careful enough to steer clear of them.

Fireball: He will shoot out a green fireball towards your direction. Once the fireball hits something, it explodes causing AoE damage. It’s possible to sidestep at the last second, just make sure that the fireball will not hit anything that will cause it to explode behind you.

Pestilence: He will shoot out three rings of floating skulls that move in a zigzag pattern. Keep a good distance away from him to make sure that you will be able to slip into the gaps in between the skulls. You can also pop Blood Rite to protect you from getting hit by a ring.

Teleport: Nicholaus will teleport a short distance to a random location in the arena. There will be a marker that will appear on the spot that he will teleport into. Be sure to avoid the spot in case he will do a follow up attack and avoid getting inflicted with fear.

Rewards in Defeating Nicholaus the Fallen Boss in V Rising

Defeating Nicholaus the Fallen will unlock the following:

The Study is an important structure to get in your castle as it allows you to unlock technologies using Scrolls.

Check out this video by Game Guides Channel showing how to defeat Nicholaus the Fallen: