V Rising Quincey the Bandit King Location & How to Beat

A guide on how to defeat Quincey the Bandit King in V Rising. 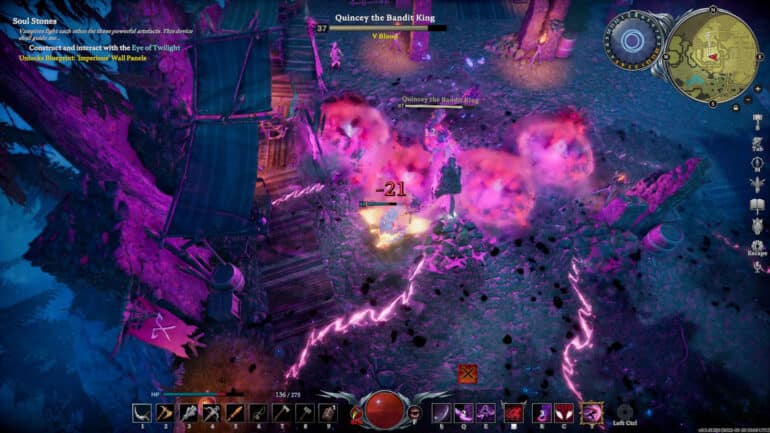 The V Rising Quincey the Bandit King is one of the bosses that can be fought in the game. As his moniker suggests, he rules over the bandits in the Farbane Woods and has established a well guarded stronghold. Defeating him unlocks access to the iron weapons and other gear for the next tier.

In this guide, we will talk about how to prepare and win the fight against Quincey the Bandit King.

Quincey the Bandit King can be found in the Bandit Stronghold north of the Farbane Woods. You can track him down using the Blood Altar. Be aware that his stronghold gates are up and has to be blasted down using at least a Minor Explosive Box.

How to unlock and create a Minor Explosive Box

To unlock the Minor Explosive Box recipe, you must first defeat Clive the Firestarter (Lv.30) at the Bandit Sulphur Quarry.

How to use a Minor Explosive Box

To use a Minor Explosive Box, place the item on your hotbar first. Then, press the corresponding key to bring out the item in the overworld and place it on the desired spot. The Minor Explosive Box only has a limited explosion range, so make sure to place it right beside the stronghold gate to ensure its destruction.

The gate to his stronghold will be back up after a couple of days, so make sure to craft some more explosives if you want to challenge him again.

How to beat Quincey the Bandit King

To defeat Quincey the Bandit King, first make sure to level up your total gear level to at least 37. You can equip these gear:

You can also get the Merciless Nightstalker set since their recipes can be picked up as a random drop from level +30 enemies or from randomly getting them as an unlocked technology from the Research Desk.

If you are fighting Quincey for the first time, it’s recommended to use the following abilities:

Quincey has several offensive attacks, as well as defensive attacks, most of which he uses his big spiked shield to execute. He is usually accompanied by two archers at the start of the battle, which should be taken out immediately to reduce the sources of damage. At less than 50% health, he can summon an archer to aid him in the fight.

Merciless Charge: He charges his shield and dashes towards your last known location. When his health goes below 50%, he will do this attack three times in succession. At the end of the third attack, he will be stunned for a couple of seconds, long enough to punish him with a counter attack. To prepare for this attack, make sure to either use your travel ability or simply sidestep at the last second, though this can be tricky to do on the powered up version.

Chaos Barrier: He will charge his shield with chaos energy to repel any incoming attacks for a couple of seconds. Be careful as even your ranged magic spells can be deflected back at you.

Aftershock: He will create four lines of fissures on the ground which eventually explode with chaos energy. When hit, it will cause Chaos Burn for a couple of seconds. To avoid this attack, either immediately run behind him and avoid the attack cone, or try to get in between the fissure lines.

Defeating Quincey the Bandit King will unlock the following:

Check out this video by Vulkan on how to defeat Quincey the Bandit King: