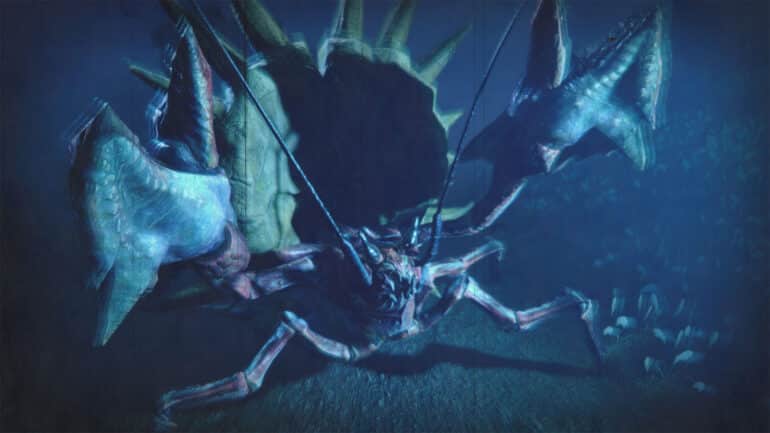 Daimyo Hermitaur is one of the returning monsters in Monster Hunter Rise: Sunbreak. It’s one of the more recognizable monsters hailing from all the way back in Monster Hunter 2 thanks to its skull shell. It’s not normally found in Kamura, however due to the recent disturbances in Elgado, some Daimyo Hermitaurs can now be found wandering the Flooded Forest or Sandy Plains.

In this guide, we will talk about Daimyo Hermitaur and share some tips on how to make the hunt for it more manageable.

The Daimyo Hermitaur is a carapaceon that carries a Monoblos’ skull on its back as its shell. It also has two meaty red claws that it uses for attacking as well as for blocking hunters’ attacks.

Though it has its own shell in its juvenile form as a Hermitaur, it sheds it as it reaches adulthood with a Monoblos skull that they get from underground. The shell can be broken twice which reveals some of its internal parts, but it can never be broken off completely. Both of its claws can also be broken.

Despite looking heavy and bulky, a Daimyo Hermitaur is able to jump high to land on a hunter with crushing force. It can also walk forwards, sideways, and jump backwards to use the Monoblos horn to attack. It can also dig underground to attack hunters from below.

Using Blast to stagger Daimyo Hermitaur often will provide an opening to reach its head and torso. Popping a Sonic Bomb whenever it curls into defense mode will also open up its head for attacks.

If you plan on using LBG, HBG, or Bow, concentrate on using fire and lightning damage to its claws and head, with the claws as being the easier targets. Otherwise, going for impact weapons such as the Hammer and Hunting Horn are the way to go.

The Daimyo Hermitaur has several moves and most of its attacks are close range melee. Listed below are the most notable moves in its move set.

How to Beat Daimyo Hermitaur in Monster Hunter Rise Sunbreak

Upon first encounter, the Daimyo Hermitaur will often use its claws to deter or attack hunters. It will do claw swipes or claw slashes which deal moderate damage. Daimyo Hermitaur can attack pretty much throughout every angle around its body, so constant repositioning based on its tells is recommended.

Once enraged, Daimyo Hermitaurs mouth will be constantly bubbling. It can now often use its Water Jet attack which can deal devastating damage, plus it can also do its Jump Crash attacks more. When it prepares for any of these attacks, be aware of who their target is to anticipate its movement.

For the Water Jet attack, run far away from the range of the jet, or get behind Daimyo Hermitaur. For the Jump Crash, try to quickly locate where its shadow is headed. If it jumps while your entire party is surrounding it, then move away from the crowd as soon as it leaps.

In Master Rank and Afflicted quests, Daimyo Hermitaur upgrades its Underground Jump to a grab combo. When underground, it will leap towards its target and if successful, it will grab its target and attempt to eat them. Flash Bombs or staggers can cancel this grab. If left to go longer, Daimyo Hermitaur will throw its victim to the ground, rear back up, leap high in the air, and crash directly on the victim.

This combo can be fatal even on high defense, so party members can mitigate the damage by using Lifepowders or Dusts of Life during the combo.

The Hermitaur Layered Armor Set can be crafted with the following:

Check out this video by Boss Fight Database showing a hunt against a Daimyo Hermitaur: