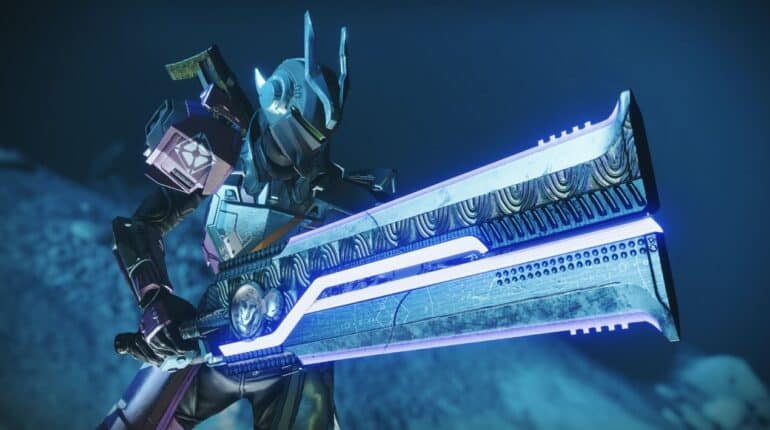 PVE is something now common among most multiplayer games, especially in Destiny 2. In the new season of Destiny 2, there are a ton of new weapons ranging from rifles to shotguns to heavy artillery. But what weapons are best to use and why should we use them?

One of the best Heavy Weapons that players must have in Destiny 2 for this season. This giant sword has the ability that does a ton of Solar damage and can break easily or rather, bypass energy shields and destroy Barrier Champion’s Shields when revved up. From a design perspective, this heavy weapon is crazy and very articulate. From a gamer’s perspective, I love abusing its ability including whenever players such as myself are in Strike Missions, and the concept behind this weapons ability is something that can be said as a God Tier weapon.

One of the new weapons that have debuted in this season of Destiny 2. Whenever using Hunter-type classes, this is the ideal weapon to use and it makes it very easy to go invisible and allows you to deal a good amount of damage due to shots in the dark and the weakening effect. This weapon personally makes you a space ninja in the field and is highly recommended for PVE events in Destiny 2.

One of the best legendary PVE LMG weapons in Destiny 2 is the Fixed Odds. Though its handling and stability are low, its impact and range abilities are top tier and can cause a huge combustion effect on impact. With proper perks and traits equipped for this LMG, it will become an unstoppable weapon that can cause havoc to every target on sight.

Every player in Destiny 2 wants to feel overpowering and prepared against waves of enemies that will make them easy to kill off. The best choice to use in this situation is the Sunshot. Combine it with war mines and kill off one enemy, it will start a chain reaction of combustion lethal to mobs everywhere in Destiny 2.

An invested submachine gun with powerful kinetic ability that is highly recommended in PVE Mode. The weapon also allows for an overflow of mags that can stack up to a total of 80 to 108. A perfect gun with a delayed damaged effect that acts like poison and is probably one of the most sinister weapons ever used in Destiny 2.

Usually, in tough situations in PVEs, a control-type weapon is needed and nothing speaks of good crowd control than the Witherhoard. This grenade launcher has lots of potential and can stack itself with lots of grenades and deal a credible amount of damage on impact. Recommend as a good backup tactic in case of a sticky situation is this weapon.

In my own words, this weapon is an eraser, not a giant sword. This weapon is a boss killer in PVEs and can cause lethal damage when it hits the ground. Its perk, Vortex Frame allows for a heavy spin attack that decimates low-level enemies in an instant. Notably, one of the best heavy weapons that are recommended, and if players don’t have the Lament or the Heartshadow, this weapon is the best choice to use.

Submachine guns in Destiny have become an important arsenal in many players’ inventory. Among them is the Funnelweb which for some reason, people are looking down since its offense is low but in fact, it is a very strong weapon that is recommended highly since combining perks such as Subsistence, Frenzy, and more to reach enemies in a distant range and increase the total capacity of the mags making it an elite weapon for PVEs.

A powerful sniper rifle is needed in Destiny 2 and one of them is the Fugue-55—a highly effective weapon to use and a weapon that is commonly used against Champions and bosses. Fourth Time’s the Charm and Firing Line can be combined on this weapon, allowing you to fire a barrage of high-power shots before needing to reload and kill off bosses quickly.

An energy grenade launcher-type weapon and a weapon that causes a chain reaction that releases a wave of energy when they contact the ground. Combining it with Assassin and Chain Reaction allows for insane amounts of destruction, and being able to fire two shots in a row at stronger enemies makes this grenade launcher very powerful. Highly recommend this one and also a must-have for PVE players.

Technically, auto rifles in Destiny 2 are common to be used in PVEs and PVPs. One of the most recommended weapons to use in PVEs is the Krait. Considering how strong this weapon is, it instantly buffs itself especially when shots are fired. Combining it with Subsistence, high damage boost, and regaining ammo will be a simple advantage that no one ever expected.

I am not kidding you guys. There is a weapon called Monte Carlo in Destiny 2 and no, it’s not a romantic vacation-themed weapon but a strong kinetic auto-rifle that builds up melee charges in infinite amounts. Equipping it with Markov Chain will instantly boost its impact abilities and be a deadly force to use in PVEs.

A powerful DPS weapon, Izanagi’s Burden, is highly recommended for players to bring out in PVEs. This weapon can land hits differently from other sniper rifles and can get more kills just by using it in PVEs. The satisfaction of having this weapon equipped is unparalleled and having backup weapons such as Divinity, will increase its critical hit rate.

Probably one of the most unique weapons found in Destiny 2. The SUROS Regime has remained a sleeping giant of an Exotic compared to the rest in its class since the release of the game. This weapon has two modes that can be switched. If players choose the fast firing mode, the weapon turns itself into a large SMG that pierces enemy defenses, and it’s a very good weapon to use in PVEs.

The top-tier weapon, Divinity, is one of the most used weapons in Destiny 2 PVEs. This weapon can be used during boss DPS for the crit hit rate up and damage boost. Since the release of the new season of Destiny 2 and the ARC 3.0, Divinity’s status as an elite weapon has been recommended by many players including those who are streaming it on Twitch.

In PVE modes, the Summoner is very powerful that melts through enemies’ defenses and when add with buffs that increase its damage stats and range capabilities, no enemies would stand a chance against you. It’s easy to use, has a clean scope, and excels not only in PvE but also in PvP as well.

At the start of its release in Destiny 2, this weapon wasn’t given much credit due to its poor Adaptive Frame and can’t be used in PVP modes. But when it comes to PVEs, this weapon is more suitable for it. Players who love to use grenades can use the Last Breath to increase its damage boost. Suitable against hordes of enemies Guardians and more.

A sub-machinegun perfect for PVE. It is not only stylish but also, a hard-hitting weapon suitable for Destiny 2. It will destroy any group of enemies without ever having to reload plus combine it with perks that increase damage when reloading, this weapon will become unstoppable. Though it’s useful against minions, it’s not very effective to use against bosses. But it makes up for its misgivings, as it can be used first to save up ammo for the rest of the weapons you have ready.

This weapon is one of the game’s best Shotguns for PvE. It’s a Precision Frame, allowing this weapon to deal a great amount of damage if you can land precision shots. It has a set of unique perks that makes this weapon an accurate monster that not only boosts its stats but also, deals a one-shot kill to any enemies that are damaged by it. For those who are rolling for a good shotgun, this weapon is highly recommended for the new season of Destiny 2.