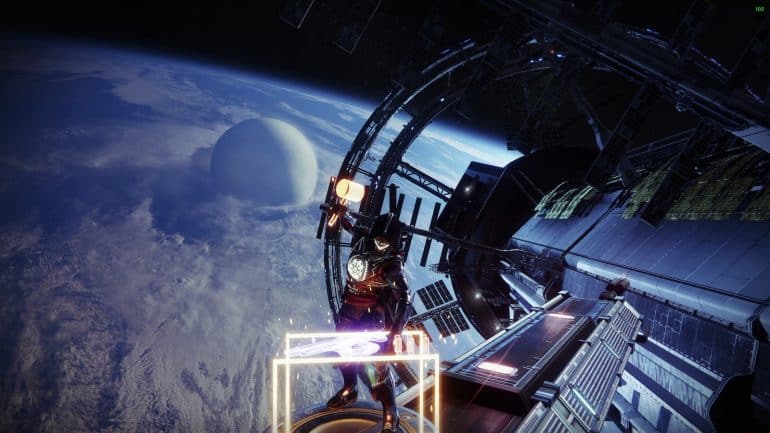 The Revision Zero Pulse Rifle is the latest Exotic to be added to the arsenal in Destiny 2. First released in the third week of the Season of the Seraph, this 450 RPM pulse rifle does very well in its intended ranges, and the burst damage the Hunter’s Trace Intrinsic trait rivals that of most heavy-hitting sniper rifles.

In this guide, we’ll tell you how you get your hands on the Revision Zero Exotic Pulse Rifle. Additionally, we’ll go over some interesting tidbits we’ve learned about the gun during testing.

How to Get Revision Zero Exotic Pulse Rifle

The new exotic pulse rifle is accessible after doing the week 3 activities for the seasonal quest. More specifically, the Revision Zero can be first obtained after completing step 24 of the “More Than a Weapon” seasonal quest.

As the new week begins, Clovis Bray will task you to open a Seraph Chest at the end of a Heist Battlegrounds Arena. When you’ve returned to Clovis, Elizabeth and Ana will have finished preparations to go to the Orbital Station to reawaken Rasputin.

You will also pick up the “Hidden Shape” quest where you’ll need to go to the Relic on the Enclave on Mars after completing the “Operation: Seraph’s Shield” Exotic Quest.

After talking to Elizabeth, the Operation: Seraph’s Shield Exotic quest will become available on the map screen of the H.E.L.M.

This quest is a part of the seasonal quest and is necessary to progress the story. You can do this as a solo or as a team of three players.

Here’s a short summary of what you can expect with the quest:

Clovis will casually give us the Revision Zero after reporting back to him.

How to Craft the Revision Zero Pulse Rifle

The weapon Clovis gives you is a red border weapon of the Revision Zero.

Here, you have two options:

Deepsight resonance at 100% is the only way to extract a pattern without destroying the weapon. The only way to get the weapon again is by crafting it in the Relic at the Enclave on Mars.

Now that you have the relic, you’ll then go to the Enclave on Mars to shape the weapon.

You need the following resources to craft the weapon:

Resonant alloy you can get as a chance drop from dismantling Legendary weapons. Resonant elements come from red border weapons.

The Revision Zero is a 450 RPM Pulse Rifle with 2 firing modes.

These are the traits that the gun can roll with on the trait slot:

Intrinsic upgrades are required to unlock new traits. Though all freshly minted guns get the Moving Target trait to start with.

At this time, it boils down to personal preference. But that can change once the weapon’s other Intrinsic traits become available. And you’ll want to keep upgrading the weapon’s traits too. Aside from the stat bump each new Intrinsic offers, the gun’s visuals will also change according to the weapon’s Intrinsic level.

While we don’t currently know how to obtain the other Intrinsics just yet, we know the conditions for unlocking the rifle’s 4 catalysts.

It’s going to take us the entirety of the “More Than a Weapon” quest to unlock everything. We’re in for the long haul for this one.

Our initial impressions of the weapon are quite good. This weapon is mostly designed with PvP in mind. It can two-burst most Guardians after quick shots to the head even with very high resilience.

In PvE, you’ll want to charge up the Hunter’s Trace Intrinsic by landing precision shots. You can change firing modes as soon as you charged up 1/4 of the energy bar. At the very most, you’ll be able to charge up to 4 shots.

Here are a couple of things to keep note of. Yes, the shield-piercing round utterly destroys Phalanx shields. Secondly, should you die while carrying rounds, you’ll lose all your stored targeting data.

It takes exactly 12 crits to fill up one section of the bar. This applies to both firing modes regardless of whether it is in PvP or PvE.

Interestingly, the game treats this weapon as a pulse rifle when it is in sniper mode. In other words, flinch is practically none existent when under fire.

From our observations, this weapon is either going to hit max range or max stability depending on the firing mode. You’ll hit max range easier with the two-burst and the same goes for the four-burst with stability.

And that’s it for our first impressions of the new Exotic. Check back here with us when we take a more in-depth look at the weapon in the coming weeks.

Check out the rest of our Season of the Seraph guides:

Also, check out this video from YouTuber LUCKYY 10P where he shares his first impressions of the new Revision Zero Pulse Rifle.