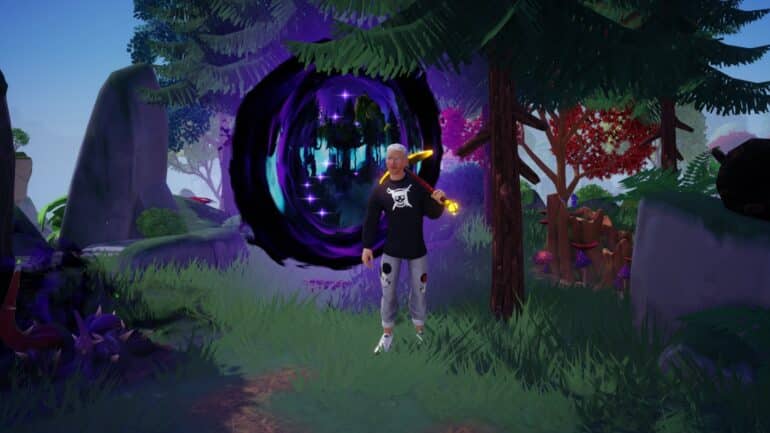 The Lost in the Dark Grove Quest in Disney Dreamlight Valley will be available to players once they’ve opened the pathway to Forest of Valor. In this area, you’ll be able to meet and unlock Kristoff, who will then offer you a quest to help find his friend Donald Duck.

As such, here’s a rundown on how to easily complete the Lost in the Dark quest in Disney Dreamlight Valley, so read on.

Kristoff can be found based on the image below, and once you take on the quest, you’ll have to go through the Dark Portal and investigate clues for Donald Duck’s whereabouts.

Once you’ve entered the Dark Grove, stay close to the portal and don’t roam around just yet. Instead, pick up the shiny feather (Donald’s Feather) in front of you and the purple plant (Vile Herb) perched atop a large thorn directly opposite to the portal.

Next, return through the portal and show Kristoff what you’ve discovered. Then take the feather to Merlin, who will then ask you to help him make a tracking spell using the following items:

You should already have Donald’s Feather, the plant (Vile Herb), and four Dream Shards on you. All that’s left is to collect 2 Emeralds.

You can search the Forest of Valor and the Glade of Trust for the Emeralds. Simply Look for Black-Colored Rock Minerals and use your Pickaxe to mine them, see the image below for reference. Get a friend with the mining bonus to help you dig for emeralds, and they could even throw in an extra grab.

Return to Merlin with all the necessary materials, and he will give you with the Enchanted Donald’s Feather. Go back through the portal into the Dark Grove and follow the floating feather to find Donald Duck. You can easily follow the Feather’s path since it leaves a glimmering trail behind it.

Talk to Donald Duck once more and complete the quest. He’ll also give you a Diary Page that he found in the Dark Grove, which leads you to another Quest called “The Curse” involving Mother Gothel.

Also check out this video by Quick Tips on How to complete the Lost In The Dark Grove Quest in Disney Dreamlight Valley: