Taking a look at what is in store for Sunbreak players. 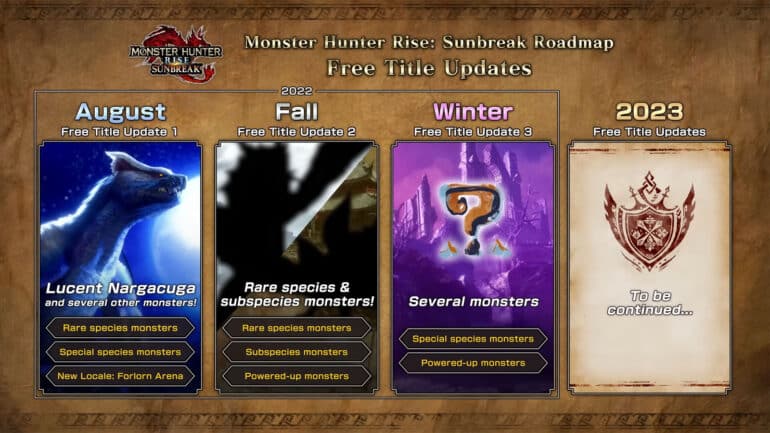 Some fresh Monster Hunter Rise: Sunbreak info just got officially announced from the Capcom Showcase 2022, including the return of some fan favorites like Gore Magala and Espinas from MH Frontier. Along with the new monsters, free title updates have also been announced, serving as a roadmap on what players can expect in their journey in Sunbreak.

What we’re going to focus on in this article are those monsters that are teased in the free title updates, as well as those monster classifications and find out why they matter. We’re going to make some predictions, so don your thinking hats as we look at some clues.

This title update is expected to be released this August and it gives us a sneak peek at just one of the monsters that will be added into the game.

Players can expect to fight Lucent Nargacuga, a Rare Species variant of the Nargacuga. It’s main distinction is its silvery white coat with a bluish tinge.

Looking back at its classification, the Lucent Nargacuga got its Rare Species tag because of how rare it is to find one. It is expected to be stronger than its common and even the other subspecies, and it is considered to be at par with the likes of the Molten Tigrex, Gold Rathian, and Silver Rathalos.

For the fans of the main Monster Hunter games, the term Special Species may not be a familiar one. That is because this classification was mainly used in the mobile game Monster Hunter Explore.

Since Explore is considered as a spin-off, comparing the power levels of these monsters to the ones in the main series can be quite messy as sometimes Special Species are not necessarily stronger than their common counterparts.

Despite that, seeing that Special Species monsters will be added in a main series game is still a big deal, similar to how Espinas’ addition to Sunbreak could be significant. This is because it also opens up the possibility of seeing monsters that are born through special collabs, festivities, and events.

The Forlorn Arena is where hunters will find most of the strong and rare monsters. It is known as the Tower from the previous games and is known to be constructed by the Ancient Civilization. The location where the final fight against the Rathalos and the Gore Magala in the Monster Hunter movie may also be connected to this location, as well as the Sky Corridor.

The Free Title Update 2 is expected to arrive sometime in Fall and we only got blurry silhouettes of some of the monsters that will be added in that update, as well as some more monster classifications. We still aren’t sure about the identity of one of the silhouettes (might be an Espinas subspecies), but we have an idea who the other one is.

The silhouette on the right is definitely a Mizutsune, and our best guess that it’s a Thunderbubble Mizutsune since it is classified as a Special Species. It could also be an entirely new subspecies, too.

Powered-up Monsters could mean a couple of things. It could be an entirely new category of monsters, but our best guess would be that it may just be the return of the Apex state. Not to be confused with Apex monsters, the Apex State is caused by the Frenzy Virus. Monsters enter this state when they survive the virus’ initial infection, making them tougher and stronger.

Since the Frenzy Virus comes from a Gore Magala and Gore has been confirmed for Sunbreak, then having to face Apex state monsters in Sunbreak wouldn’t be out of the question.

The Free Title Update 3 is expected to arrive sometime in Winter and it appears that we’ll be getting more of the Special Species and Powered-up monsters. No additional info after that other than they’re planning to release another update next year. What we are hoping to happen, though, is that they we get to see collab Special Species such as the Aberrant Deviljho or Steel Armor Diablos.

Check out this video by Team Darkside showing a hunt against a Lucent Nargacuga: