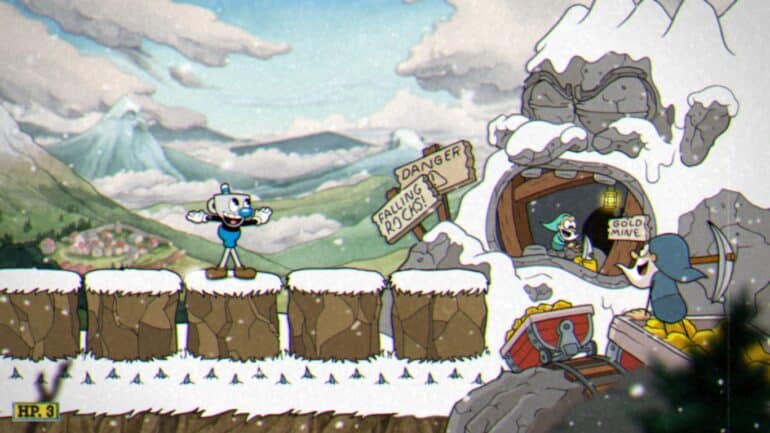 On paper, the fight with Glumstone the Giant is a relatively simple fight in Cuphead DLC’s Gnome Way Out level. But small elements in the match complicate things a little bit for each stage. And since this is one of the earliest boss fights you can do in the DLC, it makes sense for it to be more forgiving than the other boss fights.

The arena changes as the phase changes. The first phase sees you only having the tops of pillars being the only safe zone. The second phase is relatively safe, though you’ll want to watch your feet for airborne gnomes. The last stage is the most restricting with only cow skulls serving as platforms.

As you can see from the picture above, the only safe spot is on these stone pillars. There are gnomes laying in wait for the first cup to touch their pointy little caps. It’s like walking over delayed spikes the moment you touch the “ground”. But that’s not all. Every once in a while, the gnomes will poke their heads out and cast spells aimed at you. You can shoot the distractions but don’t shift your focus too much. Your target is Glumstone, after all.

The pillars are your safe zone, and after much playing and dying, I can confidently say that the pillars go up and down randomly as the game pleases. There are times when one of the pillars goes down immediately, leaving that section of the arena inaccessible. There is also the issue of gnomes climbing up said pillars, those guys are more worth your attention. They hit fast and you can’t see them immediately.

I highly suggest tracking bullets for this part… Just to keep the gnomes off your back.

Another one of its attacks sees his red nose transforming into a whistle and summoning a flock of geese. You can usually dodge them by going towards the lowest pillar. Just make sure it’s not going up while the flock is passing. If it does seem like it’s going up, you may want to drop down amongst the gnomes. Just briefly though. Don’t want to wear out your welcome.

Occasionally, the giant will introduce a bear into the arena. It’s a long drawn-out animation where at the end, he’ll be bored of it, and then he’ll toss it to parts unknown. As you can see from the picture above, most of the pillars are gone. Imagine if RNG wasn’t on my side… oh well, in previous “lives” I wasn’t this fortunate.

The second phase turns the arena into a hand puppet play, complete with gnomes watching in the background. To be honest, if it weren’t for gnomes in the stands, this phase would be a lot easier. And that’s because the stands cover potential places where gnomes can pop up out of the brush. Funny stuff.

So the two hand puppets are going to keep playing catch. As they are doing this, they make the center of the arena the most dangerous place. But two puppets playing catch with one another is the least of your concerns. Below your feet, gnomes are looking for a way to pop out of the ground to fling themselves into the air. They appear to be the greater threat in this phase. But it may be just me going all out on the hands for a couple of minutes.

Oh, it doesn’t matter which puppet you choose to target. They both share the same amount of Hit Points.

The phase ends with the giant losing his cool and swallowing up the whole arena. Cups included.

The third phase sees the fight shift to the giant’s stomach. For some reason, there’s a face in the belly of the giant. And it is intent on killing you.

The face organic growth thing (I’ll just call it “the face”) goes around the upper lining of the stomach, tossing either a chicken leg or a bone. Should it toss a bone and a skeleton eats the bone, it will open its mouth wide and ring a dinner bell. You may want to make parrying that bell a priority. Because if a skeleton eats a chicken leg, you’ll lose a platform for a considerable amount of time. Heck, you could be dead long before it goes up again.

There are also darts to watch out for. You can just jump over them. You can even duck to avoid them. That’s how inconsequential they are.

You can easily lose 2 to 3 platforms the longer this fight goes on. You can afford to lose ones in between but lose 2 in a row and that’s going to complicate things. You might even be forced to string jumps and dashes when that happens.

The phase doesn’t last all that long depending on whether you were focusing on the face and yes, luck does play a part in this too. If you have Ms. Chalice’s Super I and are in the right spot, you can end this fight rather quickly.

And your reward for beating this boss fight is a cap full of Gnome Berries!

The Gnome Way Out Boss Fight boss fight might be the most random fight in all of the DLC. From the first stage with the moving stone pillars to the final fight in the stomach, there is this level of randomness that could potentially end runs early. It is offset by the fact that it would be relatively easy otherwise. All right, that’s it, that’s all. See ya next time.

Check out this gameplay video by Level20 Games on How to Easily Defeat Glumstone the Giant on Cuphead DLC: