How to Beat All Bosses in High On Life 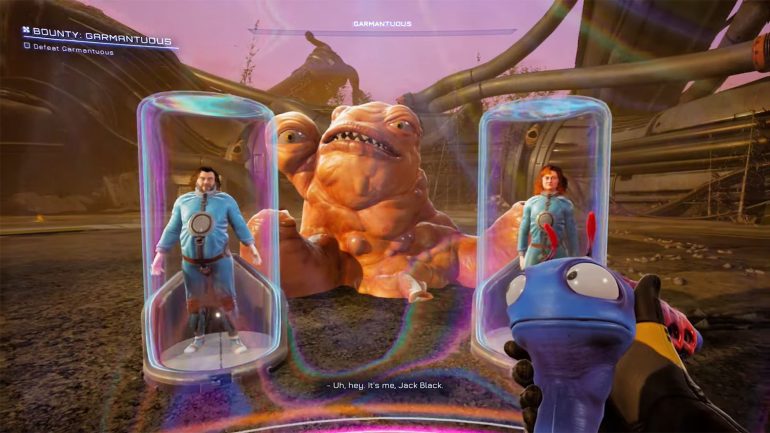 The Bosses in High On Life have their own quirks and moves, but they are challenging in their own right – maybe except for one. They’re all interesting and distinct characters, but they are all equally in the way of saving humanity’s fate of being turned into recreational drugs.

In this guide, we will briefly go through the tips and techniques of how to defeat each boss in High On Life, and include links to their own in-depth guides.

9-Torg is different from the rest of the bosses since she’s the only one that is not directly tied to the G3 cartel. She’s an agile opponent who can dive through sludge and jump out behind your back. You’ll have limited arsenal at the start of the game, but luckily 9-Torg isn’t much of a hard boss to defeat.

Shooting her with Kenny’s Glob Shot followed up with a shank from Knifey while she’s down is one good way of make quick work of her.

After killing 9-Torg, you may want to check out how to kill the secret boss, 5-Torg.

Krubis ups the challenge by a bit as he can both hover above the floor as well as tunnel under it. Because of this, he can pop in and out of the arena. He can also tap out for a bit and let his goons fight for him. He has a limited move set, but his special attack comes once he’s all furgled up as he will zip through the arena from the cave ceiling above.

You’ll still have to rely on Kenny’s Glob Shot at this point to stagger him while he’s hovering, and don’t forget a follow-up with Knifey.

Douglas is the master trainer and torturer of the G3. Not only does he have ruthless ways of bringing the pain to the new recruits, he also deals some emotional damage unto the Bounty Hunter. He mostly deals ranged damage through his gatlin and his inksac, plus he’s highly evasive, using the pillars in his lair to avoid getting hit at. In addition to that, the floor in his lair gets electrified, making it hard to find a safe area to stand on.

Since you now have Gus at this point, you can use his Disc Shot to get him staggered in conjunction with Knifey’s deflect ability to inflict more damage.

The Skrendel Bros are the ones who oversee the operation of some G3 laboratories. They are a trio of brothers that you will encounter separately, each of them having a distinct move set. By the end of the level, they can “combine” into what they call as the Bro-Tron. In this combined form, their goop attacks get stronger and more challenging to evade.

While going through the facility, you’ll be able rescue Creature, another useful gatlin and is very effective at dealing with the Skrendel Bros. Use Creature’s kids to deal damage as they home in on the bros, while you concentrate on evading their attacks.

Dr. Giblets is the brains of the G3, but though he has excellent brainpower, he severely lacks quick reflexes leading to his demise. You approach the guy, he gets startled, falls off the stairs, and then dies. But it’s not over yet as Dr. Giblets has prepared for the contingencies after his death. You’ll then be sent into his kill chamber as you defeat waves of goons and enemies that have been prepared by Dr. Giblets.

The enemies that you’ll be facing against will vary from the easy goons to the armored guards, snipers, and bazookas. For swarms, it’s best to use Gus’ Disc Shot as its ricochet easily decimates them, while for tougher enemies, its best to use Creature’s kids to deal tick damage to them, as well as his Hypno Baby to get some temporary allies.

Nipulon is the one who manages the dealing with G3’s clientele and is the second-in-command. He uses the psychedelic drugs that they have formulated as their ace to get you disoriented during the fight. You’ll have to fight through the delusions and hallucinations in your head in order to defeat him.

The challenge of fighting against Nipulon is more about perception as you simply need to figure out which one is the real Nipulon amongst the rest of the clones. You can use either Kenny or Sweezy in order to deal enough damage to Nipulon.

Garmantuous is the big boss of the entire G3 cartel and he is the one who wants to conquer other civilizations in order to turn them into his recreational drugs. With the help of his special chair, he can move along the battlefield with ease while pelting you with endless bullets.

The fight against Garmantuous is a full on bullet hell as you duck and weave through the bullets coming your way. Since you have recovered Lezduit at this point, he’s the best choice to deal significant damage to the Garmantuous. However, it takes Lezduit a while to recharge his plasma beam, so switch to your other guns to keep the damage uptime going.

During the detonation part, the bomb that gets placed inside Garmantuous will fail and Kenny volunteers himself to go in and detonate it manually. At this point, you have the option to go with it or choose another gun to detonate the bomb.

Also watch this video by Rifle Gaming showing how to defeat the bosses in High On Life: