A guide on how to defeat Electrode, The Lord of the Hollow. 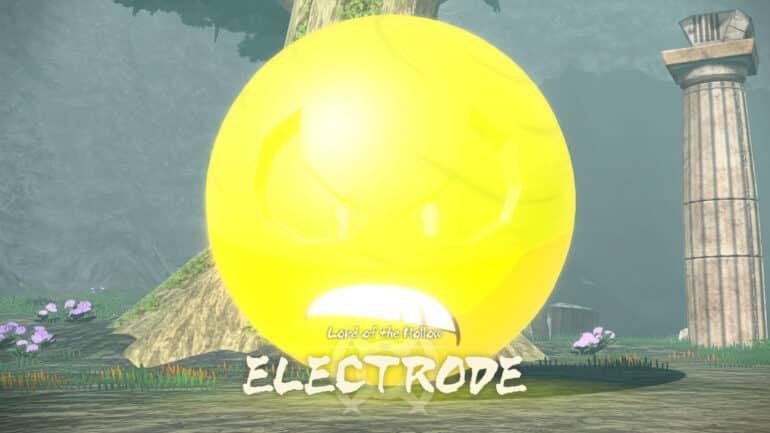 Electrode The fourth frenzied noble that you’ll have to face in Pokémon Legends: Arceus. You’ll be in for an explosive fight as you dodge and weave through its various AoE attacks. In this guide, we will look into its attack patterns and learn how beat The Lord of the Hollow.

The quest starts when Electrode has been reported to have gone into a frenzied state. Melli, its warden, thought that it should just be left in a frenzied state as he sees it as a blessing from Sinnoh since Electrode now seems more active and explosive than before.

It takes some good amount of talk and a Pokémon battle to persuade Melli into letting Electrode be quelled. The battle then takes place inside the Moonview Arena in the Coronet Highlands.

How to Beat Electrode Boss Fight

Electrode can be beaten by throwing enough balms at it to quell its frenzy. Though the arena is open and has no obstructions, the fight can get really busy as there will be a lot of stuff happening at the same time in some parts of it.

Electrode’s Attacks and How to Avoid Them

How to avoid: Dodging away from the balls is a good way not to get hit. Dodging towards the balls can work, though it is quite risky and you’ll still probably end up getting hit anyway as the balls change their direction quick enough to follow you around consistently.

The balls usually despawn once Electrode does his self-destruct move, though it might take a lot of running around and dodging through other attacks before this happens.

Electrode shakes violently as Voltorbs rain from the sky at random locations and eventually blow up.

How to avoid: These Voltorbs still takes roughly a second to charge up and thus do not explode upon impact to the ground. You’ll see a ring on the ground around where they are and as long as you’re not within it, you’re safe from their explosions.

It can get quite a handful dealing with these Voltorbs especially if there are also energy balls tailing you, so just focus on running forward to the next safe place and dodge at the right time.

Electrode jumps high and drops to where you are. It then slowly charges up as it follows you around with a glowing ring that covers most of the arena. After a few seconds, the ring will start flashing and Electrode will then explode and deal damage to everything within the ring.

How to avoid: Just run towards a safe space. Though Electrode can chase you around, you’re just fast enough to outrun it and it will stop its chase once the ring starts flashing, so you will eventually clear the explosion range. You can time your dodge outwards if you find yourself still within the range as it flashes.

After it explodes, Electrode will be stunned for a few moment, which give you the chance to throw your Pokémon at it and start a battle.

Electrode Weaknesses and How to Counter

Hisuian Electrode has an Electric/Grass typing, so Poison, Bug, Fire, and Ice attacks are super effective against it. The Electrode that you’ll be facing is at level 46.

You can choose to bring a Haunter, a Drapion, or an Overqwil that you’ve caught and raised from the previous regions to deal some Poison attacks. You can also bring a Sealeo or a Walrein that can dish out Ice attacks, or bring any of the several Bug-type Pokémon that you’ve encountered so far.

You can also chose not to send your Pokémon out to battle Electrode and purely rely on balms. However, since you’ll be dodging most of the time when Electrode is active, you will not have much of an opening to throw balms. Might as well take advantage of the stun after defeating it in a battle to throw more balms at it.

Once Electrode’s frenzy has been quelled, it will come back to its senses and give you the Zap Plate, an item used by Arceus to gain the power of the Electric type.

Can this Electrode be Captured?

No, this Electrode cannot be captured since it’s one of the noble Pokémon. If you want to get your own Hisuian Electrode, you can easily capture Hisuian Voltorbs at the Sacred Plaza which is just near the Moonview Arena. As for the Leaf Stone that you will give to it, you can go and look for it from shaking ores or by digging up treasures with Ursaluna. You may also trade for one through the Trading Post in exchange for some Merit Points.

Check out this video by Release-Fire on how to defeat Electrode: