How to Get Sylveon | Pokémon Legends: Arceus

A guide on how to get Sylveon. 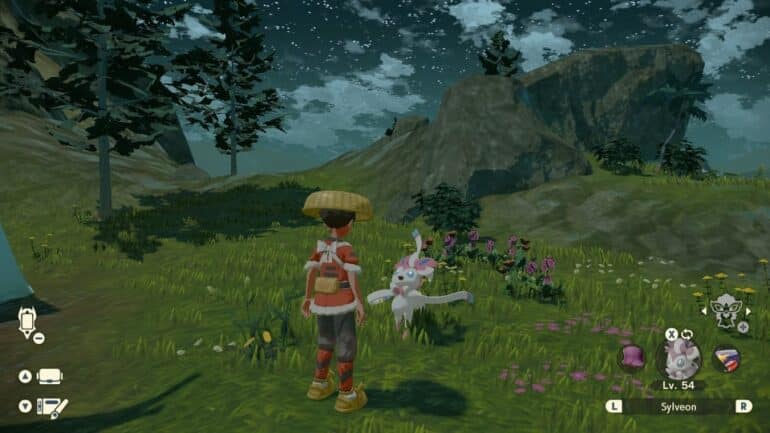 How to get a Sylveon

There are 2 ways to get a Sylveon in Pokémon Legends: Arceus, one is to evolve your Eevee using the right conditions; or another is to catch a Sylveon during a Space-Time Distortion.

Sylveon can then be evolved from an Eevee that levels up during the day while having a high friendship level and a Fairy type move in its active move list. As long as all of those requirements are met, you will be guaranteed to get a Sylveon. Most of the time, the Eevees that you catch in the wild have at least one Fairy type move already in their move list.

Requirements to Evolve an Eevee to Sylveon

Where to find an Eevee

Eevees can be caught from the Horseshoe Plains in the Obsidian Fieldlands on regular days or during mass outbreaks. They can also rarely show up in other areas such as in the Alabaster Icelands. Eevees can also be seen during space-time distortions, along with its other eeveelutions.

Catch a Sylveon during a Space-Time Distortion

Sylveons have a very small chance of spawning during space-time distortions. Make sure to bring a team that can deal with the other Pokémon that can enter the battle with it, and bring enough Ultra Balls.

How to Raise Friendship Levels to Evolve an Eevee to Sylveon

You can raise any of your Pokémon’s friendship levels just by doing any of these:

As for Eevee, once it has reached the friendship level needed to evolve into Sylveon, you will see a notification on the side and the prompt to evolve while looking in your team roster. Eevee only needs at least a high friendship level to trigger the evolution to Sylveon.

How to Check for Friendship Levels

To check the friendship levels between you and your Pokémon, you can talk to Belamy, an NPC that is located near the PokéRanch in Jubilife Village.

Does Eevee have to be Female to evolve to Sylveon?

No, an Eevee can either be male or female and both can evolve into a Sylveon in Pokémon Legends: Arceus.

Check out this guide by Gamer Guru on how to evolve Eevee into Sylveon: