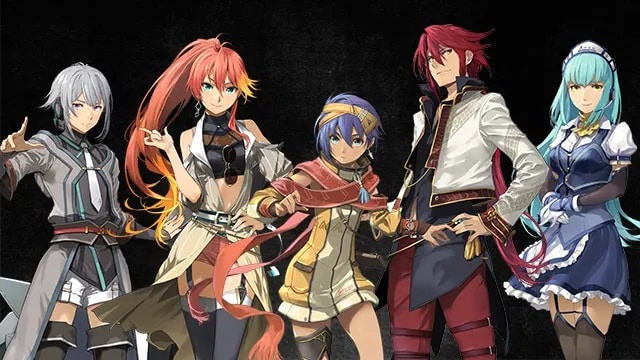 Nihon Falcom has recently revealed characters both new and old that are returning to the sequel of Kuro No Kiseki. Most of these characters are returning members and associates of Van Arkide and his allies. All of them have been added to the main website with their info updated as well.

Bio:
She is a jaeger with the high-ranking Khurga Warriors Clan corps. She leaves her family and enlists the help of Arkide Solutions to help find her friend, Aida, a sister figure to her and who has gone missing. After finding out what happened to her friend and being exiled from her family’s jaeger corps team for leaving the clan unnoticed, she happily joins Arkride Solutions and does her best upon the orders of her dotting father. She returns back to her family after the members of the Arkride Solutions decided to dissolve temporarily and was chosen by her clan to become the shrine maiden for this year’s festival in her home village.

Bio:
Aaron is a young man and performer from Calvard’s Langport. He is also a playboy who had made a name for himself as a philanderer in the Eastern Quarter, and the leader of a hot-blooded youth group. Aaron is typically disrespectful to his seniors and lives a fairly hedonistic lifestyle. He is vengeful when those close to him have been wronged and will start a fight easily.

When his friends in the Eastern were brutally wounded by Almata’s schemes, he sought revenge against them. But after learning the truth of what his past was, he decided to leave his home and work with Arkride Solutions to find his own purpose in life. After a while and resolving the major conflict of what Almata has done in the capital of Calvard, he decided to leave the team and return home in rebuilding his hometown.

Bio:
Under the guidance of the Marduk Total Security Company (MTSC), Risette is a 20-year-old woman working as a service concierge. Not only that, she is a talented person who has a friendly and polite demeanor and humor. She had a three-year relationship with Van, who has a contract with Marduk as a tester for shooting swords and hollow cores. During Van’s travels, she directly assisted him in stopping one of the plots of Almata and was given a new task of closely observing Van’s abilities, especially his GRENDEL form.

After the temporary dissolution of her office members, she returned to headquarters and seems to have met her close friends while undergoing regular physical maintenance.

Bio:
Quatre is a very talented teen. He is a young researcher enrolled in the Master’s program at Basel Institute of Science. Accompanied by XEROS and FIO, the leading drones he was involved in developing, he has an impressive neutral appearance that looks like a girl.

Although he has an intelligent and gentle personality, he also has an atmosphere that keeps a certain distance from others. Growing up with his fellow researchers, he closely views them as part of his own family and dedicates his time to developing new orbal drones that use Xipha under the guidance of Professor Hamilton at the Verne Company.

After unexpected events regarding one of his close teachers, he joins up with Arkride Solutions and closely studies the Octo-Genesis that allows Van to transform into GRENDEL. With the dissolution of the team, he returns back to his research lab at the Verne Company and starts to spend more time with his fellow researchers.

Bio:
Born from the Ranster, Judith is a friendly but also highly professional when it comes to her work as an actress. She also has a strong will and sense of justice to stand up for the weak, no matter who she has to face up to, and will not back down from a challenging foe. Judith often haphazardly reveals information about herself that can let others gain an advantage, and her refusal to admit obvious truths and ironic terribly lying ability often lead to situations where she isn’t fooling anyone. She also strives to maintain the legacy of her family known as the GRIMCAT.

In a sudden encounter along the streets of Calvard, Van and his allies encounter Judith under the guise of the Grimcat and mistake her for one of the members of Almata. Within certain twists and turns, they realize that she wasn’t and her identity of her being a GRIMCAT was unraveled by Van during their hot spring trip. Afterward, she decides to join the group and help take down Almata. When the members of Arkride Solutions agreed to temporarily disband, she returns back home to her family and continue her career as a top actress.

Bio:
She is a close friend of Judith and is also an actress with a good and friendly personality. She views not Judith as her close friend but also as her rival in their acting career. When a scandal centering around Judith was revealed in the news, she asks Arkride Solutions to help her out and possibly calm her nerves when she gets depressed.

During the final moments of Kuro No Kiseki, she mysteriously whispered saying, “things are progressing according to plan, and that once ‘it’ appears she will make the determination”. When questioned, she states it is a line from a movie and the matter is left.

Bio:
A legendary singer and the grandmother of Judith. Despite her old age, she is very active and supports Judith even if she doesn’t show it and her family closely from inside and outside the stage. She has great influence over the entertainment industry and has led many films and events to success by producing or giving acting advice. Unexpectedly to Judith, she still doesn’t know the origin of how her grandmother received the power of the GRIMCATS.

Bio:
One of the “three pupils” of Professor C. Epstein, father of the Orbal Revolution. She made great contributions to the orbalization of the Republic, and until a few years ago has been the professor emeritus at Basel College of Science and chief advisor of Verne Company. She took in Quatre and taught him how many things especially the meaning of education. She continues to research ways to save the eastern side of Zemuria from environmental disaster but was called back to Verne Company due to an incident.

Bio:
A service concierge that works for Marduk Total Security Company has a very distinct way of speaking. She is a strong-minded woman with a laid-back attitude but somehow gets along surprisingly well with Risette, who she is friends with both at work and in her private life. She provides service a virtual space service known as Marchen Garten and offers Arkride Solutions an offer they can not refuse.

Kuro No Kiseki 2 Crimson Sin will be released on September 29, 2022, for the PS4 and the PS5. The game can be pre-ordered both digitally and physically with tons of freebies and more.