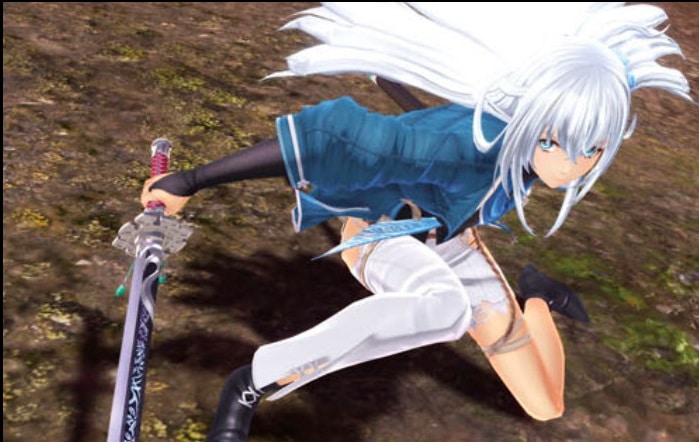 Since the release of the new short PV trailer of Kuro No Kiseki II Crimson Sin, Falcom has been releasing new info about what to expect in the game once its release this September. A new leaked image scan from Famitsu reveals new info about Renne Bright and Van Arkryde’s Grendel form. Not only that, a new character has been introduced as well as this person comes from the same line of work as Risette Twinings in the Marduk Company.

The current head of the student council and is close with Van Arkryde & Agnes Claudel. After their previous adventure in Calvard, she continues to work as the consultant of the ZCF & the proxy negotiator of the Epstein Foundation. Due to the sudden unexpected murders happening around Calvard, she decides to join Arkryde Solutions to uncover these strange events and unlock the mystery behind the RED GRENDEL.

Van’s personal AI residing in his Xipha unit. After encountering the Oct-Genesis, she can occasionally manifest as a holographic projection with true intelligence and free will, allowing Van to turn into the Nightmare-clad, Grendel. Upon hearing of another AI unit who is similar to her and can transform her host into a Grendel, she becomes uneasy hearing this revelation and sets out with Van to unlock who is responsible for such creation.

She is known as the Divine Blade of Silver and is the vice commander of Ikaruga, a mysterious group of samurai from the barren East Zemuria. After her encounter with Arkryde Solutions, she begins to become more open with hanging out with Van and company & even tries to surprise them in unexpected encounters. When the mysterious Red Grendel was sighted in the dark alleys of Calvard, she began to question who is under that dark figure and plans to assist the Arkryde solutions in a different path.

Kasim was praised as the best warrior in the Khurga Warriors Clan and is regarded as one of the strongest jaegers on the continent in general. He is the older brother of Feri Al-Fayed. He cut ties with the Khurga Warriors Clan and is now working as Head of Security at Marduk in Ored. He is given a task by the Marduk Company to find out who is the user of the Red Grendel and track down & eliminate those who know the secret behind the GRENDEL project.

Players explore the play elements of the virtual space, and can freely make up the characters who have joined the team. They can switch to this system at any time in the main story, and the teams that were separated in the main story will also gather here temporarily. Players can also obtain tokens, which can be used to decipher an item Ryokutya calls the “Mystic Cube”. By enhancing said cube, you can also upgrade your Crafts and S-Crafts.

Kuro No Kiseki 2 Crimson Sin will be released on September 29, 2022, for the PS4 and the PS5. The game can be pre-ordered both digitally and physically with tons of freebies and more.