The return of Towa from Trails of Cold Steel & new Kiseki characters are coming to Kuro No Kiseki. 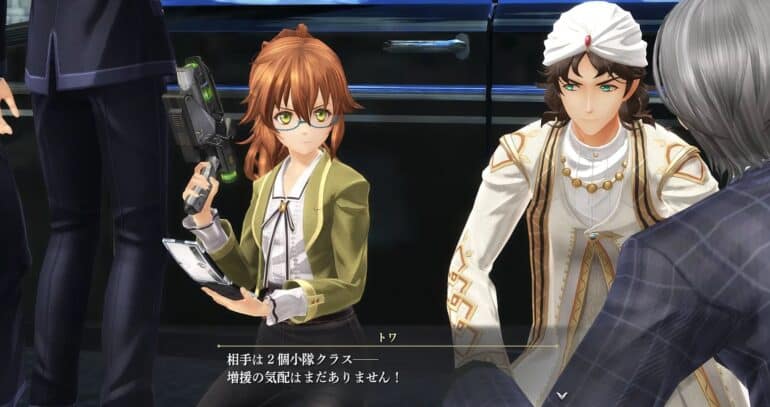 One month to go till the release of Nihon Falcom’s newest game, Kuro No Kiseki II Crimson Sin. Recently, Falcom has released new details of returning and new characters that will appear in this new segment of the Kiseki series, and fans are shocked to see the return of one of the most popular characters in the Trails of Cold Steel saga, Towa.

Known as the “Light Bullet”, this young remarkable boy is a sharpshooter on the field that uses a magic rifle as his weapon and can change the trajectory of his magic bullets with his special abilities. He has been working behind the scenes in various parts of the Republic by the orders of Ellroy Harwood, an Anguis of Ouroboros, but his relationship with Harwood beyond that and personal history remains shrouded in mystery.

Codename, “Shadow Eater”, the twin sister of IXS shares a dark mysterious mystery behind them. Although she is not very physically strong, she uses her powers to summon a giant hand made of “shadows,” and uses it at her will to demonstrate a level of combat that can easily overwhelm the average Jaeger.

A mysterious man dressed in white leads the remnants of the mafia in Calvard and works behind the scenes. Although there is a glimpse of his behavior as if he is somewhat arrogant and intoxicated by his actions, his ability with his two special large swords is overwhelming. Swin and Nadia seemed to have risen to prominence within the organization after they left the Garden, and neither of them had been informed of their existence. It is presumed that he is behind the works of the Red Grendel that have appeared in Calvard.

A princess of the Principality of Elzaim and younger sister of Prince Sherid is intelligent, serious, and steady, and is described by Sherid as “a better sister than she is”, but she also has a sense of respect for her brother. On the other hand, he can also show a somewhat alien side, such as raising enthusiasm for fictional stories that are appropriate for his age.

A female teacher from Thors Military Academy in the Erebonia Empire was assigned to Aramis High School as a temporary lecturer. While working as a teacher, he also belongs to a non-governmental organization (NGO), and sincerely faces poverty and environmental problems in various places. Although he looks like a child, he is extremely intelligent and has a strong sense of responsibility.

In the civil war of the empire and other incidents in the western part of the continent, he and his schoolmates have faced many “behind the scenes”, so it seems that this visit to the republic also has some purpose…

A prince who is the eldest son of King Saruman of the Principality of Elzaim, a traditional nation located in the central part of the Zemuria continent. While he possesses the dignity that befits the style of a royal family, his personality is friendly and generous, and to put it badly, he also has a frivolous side, and he likes to actively interact with people of different social statuses. He has a deep knowledge of culture and the arts, and through his involvement in the Salvad Film Festival, he became acquainted with Van and the others, leading to a relationship.

In addition, regarding his own way of being and his behavior in the international community, he seems to follow the first prince of the empire, Olivert, whom he respects.

She is known as one of the top-class court swordsmen in the principality, freely mastering the “Gansham Seal”, which is a traditional curved sword from the Middle East with an added power unit. While earning Sherid’s tremendous trust as a loyal subject who quietly and solemnly carries out his duties, he is often reprimanded for his frivolous behavior abroad. Basically, she is an escort to Prince Sherid, but due to his trust, she sometimes acts as an escort or assistant to his sister, Princess Zita.

The Legend of Heroes Kuro No Kiseki II Crimson Sin will be released on September 29, 2022, for the PS4 and the PS5. The game can be pre-ordered both digitally and physically with tons of freebies and more.