How to Find and Defeat Moake in Lost Ark 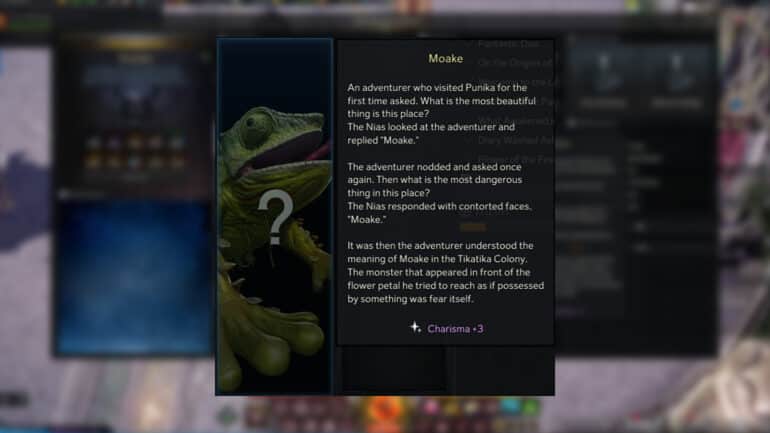 Moake is one of the world bosses that players can challenge in Lost Ark. It resembles a chameleon that can dish out different kinds of attacks depending on its current color. Defeating Moake is also a required boss fight to complete the Punika Adventurer’s Tome.

In this guide, we will look into Moake’s attack patterns, and share some tips and strategies to defeat it easily.

How to Unlock the Moake Field Boss

Where to Find Moake in Lost Ark?

Moake is a village in Punika that is part of the Tikatika Colony region. To find Moake, you have to travel by sea to Punika and then travel north from the Aira Pond Triport in order to reach this region. You can find Moake between north of Aira Pond and south of Promise Hill as seen on the map below.

If you’re having problems locating Moake, go to the server calendar and pick the Lost Ark Moake event from the drop-down menu. Then, by pressing the compass button, you’ll be able to see the actual location of Moake on a map as well.

When does Moake spawn?

Moake spawns on certain intervals within the week, along with the other field bosses. During these intervals, he will spawn every hour. You can use the Procyon’s Compass to see which times Moake will be spawning on which days. You may also set an alarm on specific days within your in-game Calendar to alert you once Moake is about to spawn.

Moake will cycle through his Green, Blue, and Red phases, dealing different elemental attacks based on his color.

Most of the attacks in this phase area the same with the ones from his Green phase, except for ranged attacks that now inflict Freeze.

Most of the attacks in this phase area the same with the ones from his Green phase, except for ranged attacks that now inflict Burn.

How to Defeat Moake in Lost Ark

Make sure there are other players are present to assist you in defeating Moake, as it is an end-game boss built for group combat.

There are various different types of area-of-effect strikes that you should be aware of when fighting Moake. Tips on how to overcome most of Moake’s attacks, which you are likely to experience during the raid, are listed below:

Once Moake has been defeated, players who participated in the fight will have a chance to receive these rewards:

Plus, defeating Moake at least once will complete his entry in the Punika section of your Adventurer’s Tome, and will give you 3 points of Charisma for your roster.

Moake is going to be a fantastic option for acquiring high-quality end-game gear. As of right now, it is the only end game world boss that provides T3 players with the opportunity to loot legendary end game items and equipment.

Check out this video by Juse on defeating Moake: