All you need to know about increasing your Rapport in Lost Ark. 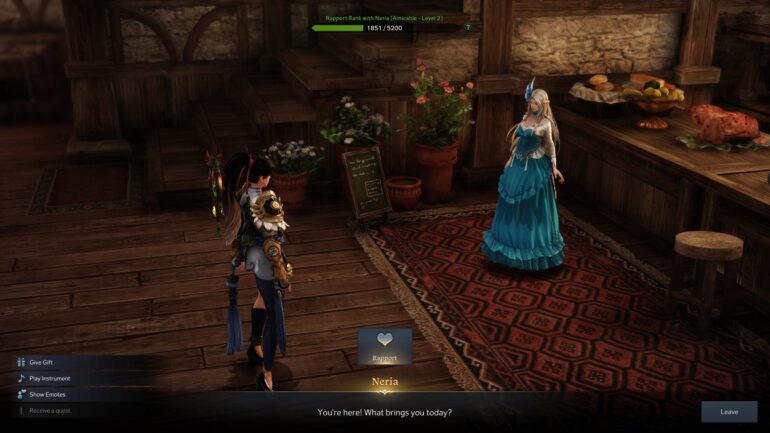 Rapport in Lost Ark is a system where you build a relationship between you and certain NPCs in the game. Rapport can be gained through various means and as your relationship towards an NPC grows, you will unlock more quests and get more rewards.

In this guide, we will talk about the Rapport system and how you can easily cultivate your relationship with Lost Ark’s NPCs.

How to Unlock Rapport with an NPC in Lost Ark

There are only certain NPCs who you can build Rapport with, and you will meet most of them just by going through the main quests. Some of the NPCs can only be interacted for Rapport once you meet a certain Virtue Stat requirement or once you have completed a certain quest.

You can also easily spot an NPC you can establish Rapport with within an area by using the Map (M Key) and filtering NPC > Rapport NPC. They will also show up as NPCs with floating hearts above their heads in the overworld.

How to Check for Rapport Status in Lost Ark

To Check for Rapport Status, you can go to the Adventure > Rapport menu or press Alt + N. You will then access the Rapport window where you can check all the NPCs that you have met and you will meet categorized by region. From this window, you can also see all the rewards that you can get from them, as well as their preferred gifts.

How to Increase Rapport in Lost Ark

Rapport in Lost Ark can be increased in different ways:

Each NPC have different preferences when it comes to the emotes, songs, and gifts and the amount of Rapport points that you get from each action will also vary.

Your relationship towards an NPC increases as you reach certain levels of Rapport. The Rapport tier is listed from lowest to highest tier below:

Some NPCs have additional requirements other than Rapport points to increase their tier, such as the Virtue Stat requirement. You have to reach a certain amount of Wisdom, Courage, Charisma, and Kindness before you can move on to your next stage of relationship.

Most of the gifts that you get from doing certain quests only give out around 300-450 Rapport points, while there are some gifts of Relic and Legendary tiers that can give out 2,000 to 10,000 points, but these are usually bought by using premium currency from Nada who is the Rapport Trade Merchant or given as part of the rewards from a chest or from the Adventurer’s Tome.

All of the gifts listed below can be given to any NPC that you can build a relationship with:

Aside from the Relic and Legendary tier gifts, there are also the regular or the Rare tier gifts that you will obtain more often. These gifts provide varying amounts of Rapport points depending on the NPCs affinity to it, or for short, if it’s their preferred gift.

As soon as you meet an NPC and unlock their Rapport, you will immediately receive a reward. You will get more rewards the higher you raise your relationship with the NPC. The typical rewards include:

How to Unlock Songs in Lost Ark

Songs have several uses in Lost Ark, including playing them for certain NPCs to increase their Rapport. You can play an NPC’s favorite song/s once a day. Most of the songs will be obtained just by playing through the main story, while some can be exchanges with merchants or gained as rewards from the Adventurer’s Tome.

Below are the Songs in Lost Ark and their corresponding quest or condition to unlock each:

How to Unlock Emotes in Lost Ark

Different NPCs like different emotes and along with songs, you can visit an NPC once a day to perform an emote and a song. But not all emotes will be available to you. Most of them can be unlocked through different quests or purchases.

Below are the emotes in Lost Ark and the corresponding quest to unlock each:

Aside from Rapport Chests, Nada also accepts exchanges for skin chests. These skin chests can be exchanged with Providence Stones which you can collect from doing side quests.

Where is the Rapport Shop?

The rapport shop is represented by the pink Trade Merchant icon on your Map, and can be found in different cities in Arkesia, Luterra castle, Vern Castle, etc. Just look for the pink box icon on the map in the city, and the NPC’s name is Nada.

Nada sells two types of skins and the look of each piece in the set depends on the class of the character that wears them. Each piece also provides a small buff depending on the main stat of the class, and some charisma points.

Important note: Lost Ark Rapport Exchange skins can’t be dyed, make sure to examine the chest first and only purchase if the color or the contents are what you desire. Just do a ctrl+right click to reveal the contents of the Skin Chest.

Check out this video by RaZzi explaining the Rapport system of Lost Ark: