A guide on how to complete the Monte Island quest in Lost Ark. 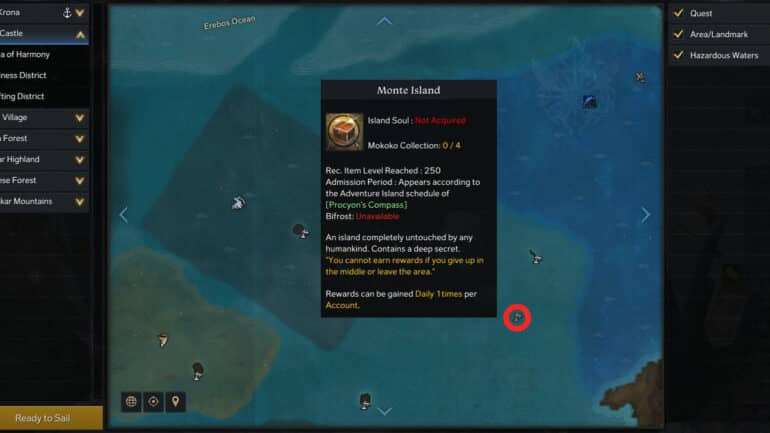 Monte Island is one of the Adventure Islands in rotation within the seas of Lost Ark. Players can visit this island and join a chest opening contest, as well as find merchants and some Mokoko seeds.

Where is Monte Island located?

Monte Island can be found northwest of South Vern. The closest port that you can sail from is at Frozen Sea at Shushire. Monte Island is an Adventure Island, which means it is only open at certain times of the day, and at certain days of the week.

It’s best to check ahead on when you can visit the island by going to the Calendar on the upper left corner of your screen. Just go through the dates and check under Available Content > Adventure Island to see if Monte Island will be open on that day. You can also set an alarm within the calendar for it to make sure that you won’t miss out.

Alternatively, you can also use your Procyon’s Compass by clicking on the compass icon underneath the minimap on the upper right corner of the screen. Under Adventure Island > Appearance Notif Info, you will be able to see which islands are scheduled to open on that day.

What is the Monte Island Contest?

The Monte Island contest will have you compete against other players on who can get the most points from collecting a particular item scattered across the island.

Once you arrive on the island, a competitive quest called “Sweet Dreams” will start. The objective of this quest is to collect as many Dreamlight Shards as you can, and you can collect these shards by opening the treasure chests on the island.

During the contest, there will be a mini-event where moving chests or mimics will appear. In order to defeat them, you are given a frying pan that you can equip by pressing F5, and then you can whack these mimics with it. Once defeated, they can also drop Dreamlight Shards that add to your score.

Be aware that you cannot open chests once you have the frying pan on your hand, so press F5 once more to unequip it.

Once the 5-minute timer is up or once a total of 5,000 shards have been collected by all the participants of the contest, the player with the most amount of shards collected will be declared as the winner.

Depending on the score ranking at the end of the contest, players will get different amounts of Monte Island Participation Rewards and Silver.

These Monte Island Participation Rewards is a kind of currency that can only be used to exchange goods from the merchant in Monte Island.

You can find Traveler Herodot in the middle of the island from whom you can exchange your Monte Island Participation Rewards for other goods.

How to get the Monte Island Token?

Check out this video by RaZzi on how to do the Monte Island contest: