A guide on how to hunt a Lunagaron in Monster Hunter Rise: Sunbreak 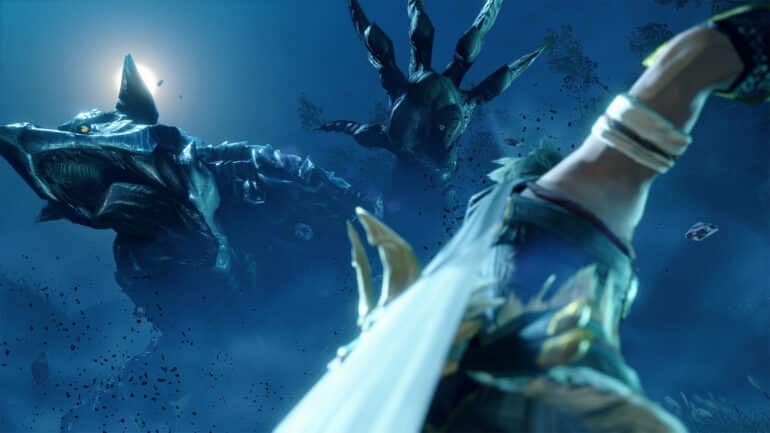 Lunagaron is one of the new monsters in the Monster Hunter Rise: Sunbreak expansion. It usually roams the area of the Citadel, however some Lunagarons have been spotted near Kamura. This encounter started an investigation as to what caused its sudden and unusual migration, which led hunters to explore the land of Elgado.

In this guide, we will talk about Lunagaron and share some tips on how to make the hunt for it more manageable.

Lunagaron is a fanged beast that has a body structure similar to a wolf. Its theme is based on the classical depiction of a werewolf; when it enters its rage state, Lunagaron can even stand on its hind legs and take a bipedal stance.

Also known as “Moonlight Nocturne“, Lunagaron has the ability to control its body temperature and cause ice spikes to grow around its body when it needs to. It can also breathe out freezing air and instantly incapacitate those that get hit.

Due to its body structure, Lunagaron can be swift and agile, and therefore dangerous for hunters who cannot keep up with it. Its long tail is a third of its total body length and can be used as sort of a mace to swing against hunters. It is also known as one of the Three Lords of Elgado, along with Malzeno and Garangolm.

Aim for the head with either one of its elemental weaknesses whenever possible to slow it down. Since most of its weak parts are in the front half of its body, try to position accordingly while being aware of its tells so that you can make an easy evade. Ranged hunters should focus fire on its head with explosives to stun it.

Though it is resistant to most ailments, hitting it with a stun, paralysis, and even sleep can help reduce the challenge of the hunt by making Lunagaron as immobile as possible.

The Lunagaron has several moves and most of its attacks are pounce melee. Listed below are the most notable moves in its move set.

How to Beat Lunagaron in Monster Hunter Rise Sunbreak

Lunagaron has three phases based on its appearance:

During its normal phase, Lunagaron will often do its pounces, dashes, and flips to fight against hunters. It will move around from point to point, so catching up to it can be quite tough, but is still manageable.

Lunagaron lets out its first Chilling Howl, growing icicles on its legs and tail. It will then move a bit faster and more aggressively, so pay close attention to its tells and moves to be able to move accordingly. The icicles on its body cannot be broken yet.

At this point, Lunagaron’s movement will be harder to follow, so it’s best to dish out all incapacitating items to keep it in control. This is also the best time to lure in a monster to keep it distracted, as well as get a way to easily deal with its icicles and bring it back to normal. Once all its icicles are dealt with, Lunagaron will revert to the normal phase and start the cycle again until it gets slain.

The Lunagaron Layered Armor Set can be crafted with the following:

Check out this video by Boss Fight Database showing a hunt against a Lunagaron: