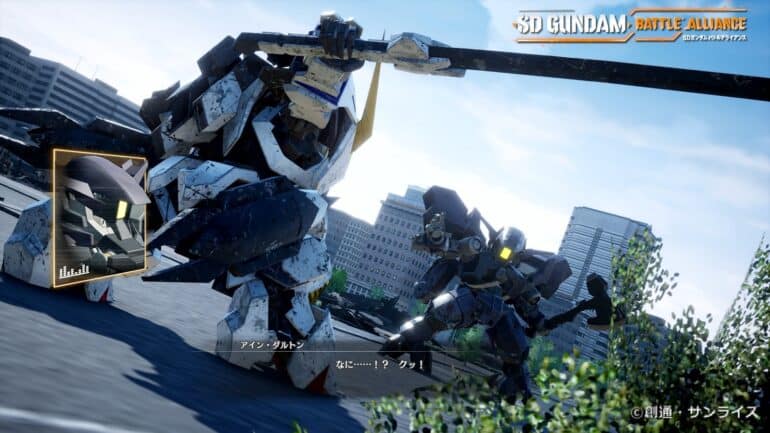 SD Gundam Battle Alliance is approaching its release date. With so many gameplay leaks and character reveals, Gundam fans are now wondering what else does the game has to offer. Recently, BANDAI NAMCO has revealed a new trailer featuring the contents of the 1st paid DLC and an unexpected announcement that fans will love as the release of the game approaches.

Based on the trailer, the 1st Paid DLC content will feature two new missions and units from Gundam Age and Gundam NT. The two missions are titled, “The Cursed Treasure,” and “Destination of the Legend”.

In one of the most iconic scenes from Gundam Iron-Blooded Orphans, Tekkadan is now facing the mobile armor known as Hashmal. With the power of the Gundam Barbatos Lupus Rex and his limiter release, they manage to protect their hometown from destruction. Unfortunately, the history of what happened in Iron-Blooded Orphans has been rewritten as an unexpected distortion occurred as the rogue mobile armor unit from Gundam Age known as Vagan Gear SID appears out of nowhere and attacks TEKKADAN. Upon the descent of the distortion, Kio Asuno arrives and pilots the Age FX and helps them take down both SID and Hashmal together.

Destination of the Legend

In the final battle for the Laplace Box, Banagher Links pilots his Unicorn Gundam and takes on Full Frontal’s Neo Zeong. As the battle nearly ends, multiple distortions appear and come together in the midst of the battle. Appearing out of nowhere are the RX-78-02 Gundam, Zeta Gundam, Full Armor ZZ Gundam, Nu Gundam, and Narrative Gundam C-pack as they come to help out Banagher as they take on Neo Zeong, the O, Quebley, Zeong, and Sazabi together.

Bio: A third-generation pilot of the Asuno family. Known for his family’s skills in piloting Gundams, Kio takes on the mantle of being a pilot of a new Gundam that was developed for him by his grandfather after finding out that his father disappeared. After learning the hardships the Vagan has endured throughout the years, he decides to use the power of the Gundam to build a bridge of peace for both Earth and Vagans alike.

Bio: A 25-year-old Ensign in the Earth Federation, Jona has been assigned to the Shezarr unit of the Earth Federation Forces Clop-class cruiser Damascus as part of the “Phoenix Hunt” taskforce at the request of the Luio & Co. After the events of Laplace Box Incident, he and his allies take part on hunting the last UNICORN known as Phenex. Hunting the Phenex was the main goal for his allies but for Jona, it was personal as he knew that the user of the Phenex was someone who was close to him growing up. He will ensure that he will do whatever it takes to save the souls of his beloved friends and families by accepting what the Phenex has.

At the end of the trailer, Bandai announced that there will be a DEMO version of SD Gundam Battle Alliance which will be available for all consoles worldwide. Fans will get a chance to play the game until the end of Chapter 1 and can transfer their saved demo file to the full game once it’s out.