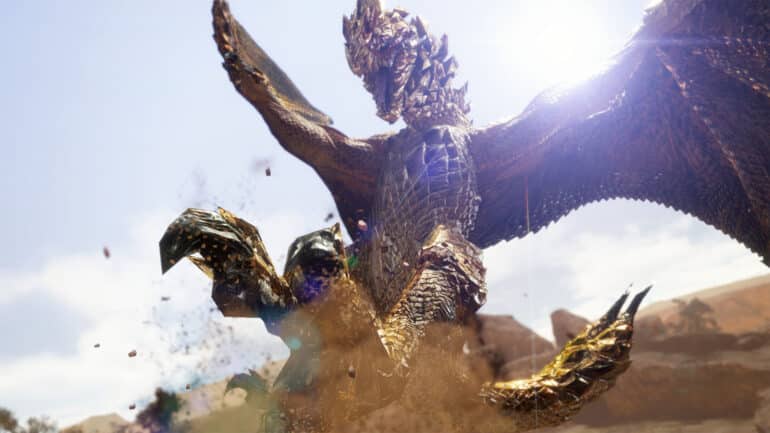 Seregios is a returning monster in Monster Hunter Rise: Sunbreak. Last seen in Generations Ultimate, it is back once again in the hunting list as hunters set off to Elgado to investigate the the mysterious disturbances in the area.

In this guide, we will talk about Seregios and share some tips on how to make the hunt for it more manageable.

Seregios is a flying wyvern that is known for its bladed scales and for its expertise in aerial hunting. Its head, legs, and tail are full of these scales which it can fling towards its target. It can also fling them in a fan to set its prey’s path into its perfect target location.

These scales are highly sought for their sharpness since they are sharp enough to cause deep lacerations and inflict profuse bleeding. Which is why hunters should also prepare whenever they have to hunt a Seregios so as not to get cut with these scales themselves.

Seregios are adept at ambushing their prey from the skies, and due to this, they mainly use their legs instead of their wings to attack hunters. Focusing on these legs more will cause a Seregios to trip often, making the hunt easier to manage.

As Seregios often flies and dives down, there won’t be that many chances to hit its head. However, its legs are also as equally weak to damage as with its head, so weapons like the Longsword, Dual Blades, and Sword and Shield are effective in dealing damage in these tight windows. Lance and Gunlances can also block and counter the dives to get a more direct hit at the legs as soon as they land.

Going with Thunder element weapons is the way to go as Seregios is weak to this element. Bringing Flash Bombs and using them in time with the dives is one way to counter its attacks.

The Seregios has several moves and most of its attacks are dives and tail whips. Listed below are the most notable moves in its move set.

How to Beat Seregios in Monster Hunter Rise Sunbreak

Seregios normally attacks using its legs and its tail while hovering in the air. Whenever it is in the sky, it will attempt to dive down and either kick the target or use its tail to impale the target. Using Flash Bombs while Seregios is in the air is effective as it cancels its attacks and makes it fall to the ground.

Seregios will also shoot out its slicing scales as projectiles. When hit, hunters will get the Bleeding ailment. This will appear as a purple bar overlaid on a section of the HP bar. Whenever the hunter does any action that takes more effort than walking (i.e.: running, attacking), the purple bar goes up and once the hunter gets hit again, that amount of damage will be taken from the hunter’s current HP on top of the hit’s damage.

To cure the bleeding ailment, the hunter must crouch and stay still at a safe area for a few seconds. An alternative cure for bleeding is to eat a Well-Done Steak, but this is only recommended if the hunter needs to replenish stamina as this option takes a longer time to cure than the first one.

When Seregios enters its rage state, its scales will flare out, making it look like a pinecone. In this state, it will become more aggressive and it can chain attacks in a quicker succession, making it harder for hunters to recover from a hit if they’re being targeted.

At this point, it’s best to dish out all the incapacitating moves and items that can induce sleep, stun, or paralysis to keep Seregios under control.

The Seregios Layered Armor Set can be crafted with the following:

Check out this video by Boss Fight Database showing a hunt against a Seregios: