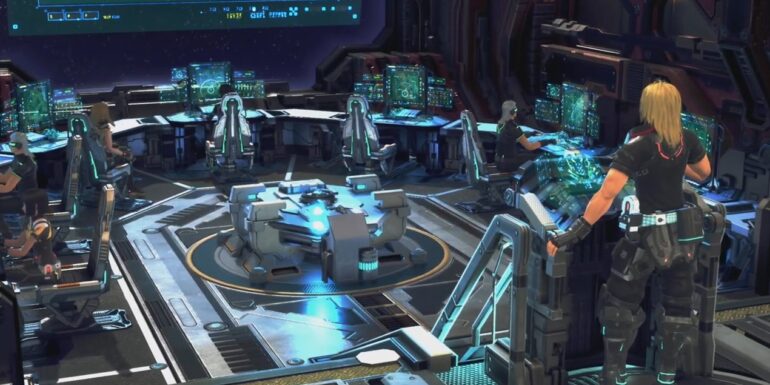 In Search of the Three Wise Men is the first chapter of Star Ocean: The Divine Force, in which you’ll be shown an exciting narrative from different viewpoints. This guide will teach players what they need to do and what the main objectives are to clear the game.

In Search of the Three Wise Men: Larcasse Weald

At the start of the game, players must choose one of the two routes to begin with as the story will flow depending on whom you choose. There will be parts where both characters meet up and will have separate missions so it is recommended to make a save file properly.

After choosing the route and difficulty settings of the game, several scenes will begin until you can control your chosen character. Follow the objectives based on the main character that players chose at the beginning.

Either way, players must follow their objectives and once that happens, they will eventually have to fight a Giga Toad. After defeating it, Raymond and Laeticia will meet up and group up together.

After teaming up, head to the northwest to follow the next objective to find Raymond’s missing teammates. Use the R2 button to open the MAP to determine where to go. Eventually, players will encounter some Mist Graves, and players will learn the basics of dodging.

After which, head up and you will reach the campsite where you can rest and refill the party’s HP. Continue following the marker and eventually, the crew will find themselves positioned at the entrance of the ruins. The path of ruins will be blocked as the stairs have been decimated. Head south to where Albaird points and climb it, defeat the enemies guarding the door, then head straight to the entrance.

In Search of the Three Wise Men: Mhedume Ruins

After heading inside, continue exploring the ruins where there are chests and resources that players will need in their future endeavors for Star Ocean. After which, follow the next objective marker where there you will find another escape pod.

The pod will contain a little robot known as D.U.M.A that will help players in combat. It can shoot, defend and do a lot more as well as Blindsiding enemies from a distance. Eventually, a boss fight will engage, and players must attack the U.D. Hercules. Aim for its 2 legs, as they are the weakness of the boss, and then attack the head.

Now after defeating the boss, players will be taught more about how to use the D.U.M.A. Using the L2 button, the D.U.M.A can scan the area and use it to locate any chests that players might have missed and track down resources they can farm. After exploring all the areas, head to the next objective to return to Larcasse Weald and go to Larcette Village.

In Search of the Three Wise Men: Larcette Village

Once players reach the village, there is a sidequest that players can complete optionally known as the Find My Kitty. Afterwards, head inside the inn and rest. Then, look around the village and interact with the shops around and buy the necessary equipment for the next journey. Follow the next objective and leave the village.

In Search of the Three Wise Men: Delryk Village

After exploring the outer regions of the map (after leaving the Larcette Village), players must head straight to Delryk Village in order to complete the next objective. But before that, make sure to explore around and gather resources since the next objective will be very hard to overcome. As players reach Delryk village, new side quests can be found called “Why Is It Only Me?” and Delryk Oddball. Clearing both of these quests should help players shop for items and accessories they will need moving forward.

Explore the village from ground level to rooftops as there are tons of DP all over the buildings in this place so make sure to run around and get it. Head straight to the inn and rest afterwards. A short cutscene will occur and players must make their way to the mines.

In Search of the Three Wise Men: Delyrk Mines

The Delryk mines are one of the regions where players can loot lots of resources. There are a ton of chests that can be found but also, dangerous enemies ahead. Be wary also as when players begin to explore this part of the map, they will encounter a boss battle. Take down all the enemies found in the mines and loot the chests hidden inside and after that players can tackle the boss.

The boss of the mines is called Mother Worm and it is difficult to defeat. Upgrades and unlocking of skills are required for this large worm can summon smaller worms to defend it and use all types of magical elements. One of her deadliest attacks is called Drawin In as she begins to go underground and starts sucking up the air around and trying to grab players. It’s hard to avoid but try to run as fast as possible.

Another thing that the Giant Worm is known for is her Upthrust attack which is very dangerous to be hit by. But if players manage to hit its red spot quickly, the worm will be stunned leaving itself vulnerable to any incoming attacks. Make sure to stock up on blueberries to avoid losing teammates.

After encountering and defeating the worm, another cutscene will happen and will lead the party to return to the Delryk Village. Following the cutscene, players will return to the inn and the owner will tell the crew that Nina has left a message for them. Head out and go to the hospital where another cutscene will occur and she will eventually join the party and the fast travel option will be unlocked. Leave the village and stock up on items for the next destination.

In Search of the Three Wise Men: Seaport of Rythal

The Seaport Of Rythal is the next destination for your party. Players can do the following sidequest upon reaching the port:

But before doing any of these sub-quests, head to the inn and rest your party member. Afterward, look around the village and start shopping for items that players can use. There are also chests hidden around and DPS that can be searched around. Make sure to use the D.U.M.A to scan the area to find them and make your stop at the Village of Eda by traveling through the Edhali Region.

In Search of the Three Wise Men: Village Of Eda

On route to the village of Eda, players will encounter new enemies along the way and this will be the perfect opportunity for them to increase their stats and levels. Try to clear out as many enemies as you can for it is recommended. Don’t forget to loot for resources as possible for once they reach the Village of Eda, they can complete the subquests known as Meet Some Meat.

As players reach the village, continue exploring around chests and resources and then, make their way to where Midas is. Watch the cutscene and out of nowhere, Elena will be in danger. Midas will join your party and Chapter 1 will come to a close.

That’s our guide for Chapter 1: In Search of the Three Wise Men in Star Ocean: The Divine Force. For more Star Ocean Divine Force content, players can visit our previous articles below to get to know more about the game: