Here's a complete guide on Golden Ace of Spades, where to find them, and the best perks to use it on. 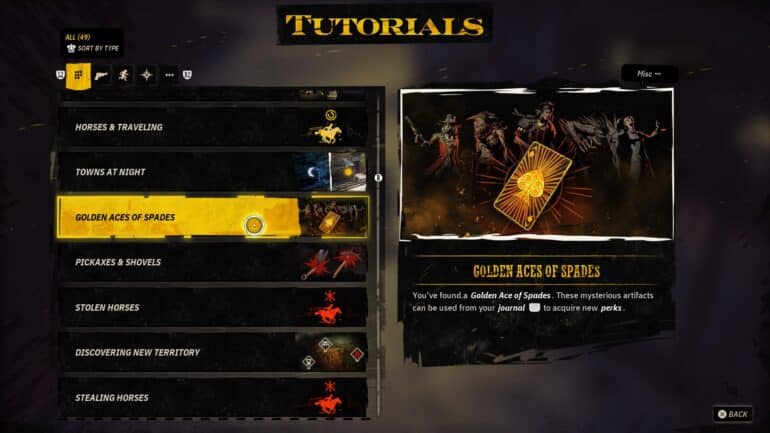 Golden Ace of Spades in Weird West are important for giving you useful perks. These will allow you to do more damage to unaware targets, reload faster, jump higher, and etc.

What Are Golden Ace of Spades in Weird West?

Golden Ace of Spades are shining yellow cards that can be found all over Weird West. They seem to possess some mystical qualities that nudge the odds in your favor.

Golden Ace of Spades can be consumed to learn perks. These perks are not unique to the character you’re playing and will carry over from one journey to the next. They can be incredibly useful as they can give a range of benefits to your whole game.

Golden Ace of Spades are permanent investments, unlike Nimp Relics which are unique per character playthrough. They can carry over from one character to the next so if you’re playing a new chapter, your invested perks will stay with you, unlike your character abilities.

All Golden Ace of Spades found from Secret Stashes and Random Encounters:

Best Perks to Use Golden Ace of Spades in Weird West

Here are all the perks you can use your Golden Ace of Spades on:

It’s always a good idea to invest in perks that prioritize survivability first. This puts Healthy and Trail Medic at the top of the list since they keep you alive the most.

Next what you’re going to want to focus investing on are perks that enhance combat. Quick Reload is a decent perk as every second you’re using to reload your gun is a second you’re not hitting the enemy. Posse Leader helps enhance your posse by making them tougher and hit harder. Demolitionist can help you quickly take out groups of enemies. These three perks help put pressure on the enemy and always keep you on the offense.

Perks like Ambusher and Quick Stealth depend if you prefer taking the quiet approach. Ambusher is a very good perk, combined with the Sentry Silencer ability, you can reliably take out anyone unaware in one-shot, even bosses. Quick Stealth helps you get around faster, reducing the risk of getting caught.

The following perks are rather situational and your mileage may vary. If you like saving up money, then Haggler and Scrounger are good perks. Bullet Dodger doesn’t really come up useful in most scenarios and you can go through most of the game without High Jumper. Locksmith seems to be the least useful perk unless you’re planning on dedicating to an unlawful route.

Each perk can be invested up to three times with each level becoming more powerful than the last. The investment costs per level are fixed.