A complete Weird West bounty hunt guide on how to kill Shelby Cross. 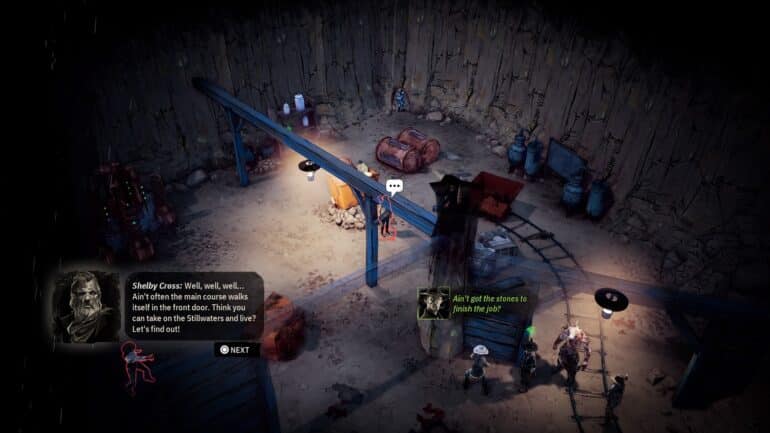 Shelby Cross is the main antagonist of Jane Bell in Weird West and you may not get how to kill him the first time.

If you’ve been itching for some payback for your son, then we’ve got the guide to show you the steps on how to kill Shelby Cross in Weird West, how to prepare for his boss fight, and the rewards you get to taking him out.

How to Kill Shelby Cross in Weird West

You will only have 15 days to take out Shelby Cross once you’ve accepted the contract. So we recommend you do a little preparation first.

Here is how you can prepare for your encounter with Shelby Cross:

Shelby Cross in an incredibly tough opponent. He can be found surrounded by two other Stillwater Rangers in the deep mines of Sandstone Ford. Even in his human form, he’s a tough opponent who can take you out instantly.

In the first phase of the fight, Shelby will use his shotgun and dynamite to take out you and your posse. Due to the tight spaces of the mines, this is an incredibly effective tactic. Keep your distance when he chucks a dynamite your way and uses any of his shotgun skills.

The best way to counter this is to focus on taking out his help first. His men are much weaker than him and can be taken out with ease. Keep your distance from him and start firing when he reloads.

Shelby will transform into his vicious Siren Devourer form once you’ve damaged him enough. This is the second phase of the fight. Fighting Shelby as a Siren Devourer is ironically much easier than fighting his human form. Just ensure to dodge his yell which will stun you and keep your distance.

Alternatively, you can bypass his boss fight entirely if you can manage to get behind him without being seen and knocking him out. You can then damage his unconscious body with melee attacks until he’s dead. He won’t wake up from this so you can keep hitting him.

Here are all the rewards from killing Shelby Cross:

There doesn’t seem to be any dialogue from Jane Bell even if you brought her along to kill Cross. You do get some nice rewards for taking him down but the Stillwater gang will still be around and some of them might even come after you.

Still justice has been served and the Weird West is certainly better off without the Stillwater gang leader. Cross is just one of the many sick denizens that thrive in the lawless cruelty of the barren west.

Can You Capture Shelby Cross Alive in Weird West?

You cannot capture Shelby Cross alive in Weird West even if you knock him out. The prompt to handcuff him never appears and he’s one bounty target you really have to kill. This makes sense, seeing as he’s a siren and is impossible for the Grackle sheriff to contain in jail.

We have more Weird West content for you to check out: