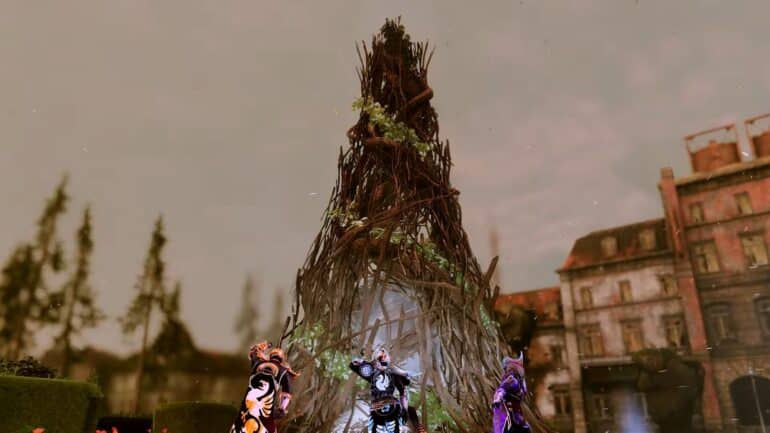 The Solstice of Heroes 2022 event in Destiny 2 is here, and with it comes a plethora of prizes for playing the Bonfire Bash Activity. This is also the primary means by which Silver Ash can be obtained and by which many of the Solstice Event Challenges listed on the Event Card can be accomplished.

As such, here’s a rundown on how the new Bonfire Bash activity works to get you the best rewards.

Where to Find the Bonfire Bash Activity in Destiny 2

The Bonfire Bash event will be displayed at the very top of your Director’s world map. But before you can access it, you must first meet with Eva, who can be found in the Tower Courtyard, and accept the Celebrating Solstice quest.

When you complete the first part of the quest, you will receive your first pair of Candescent armor. Equip it to your Guardian, and then return to Eva for the Silver Leaves reward.

The objective of the Bonfire Bash Activity is for the Guardians to make a bonfire using the bodies of fallen enemies. As long as there are no more than three players on your Fireteam, you should be able to finish the task. You also have the option to join other players once the game has already begun or to play solo.

Each and every Bonfire Bash match is played in the European Aerial Zone,  But basically, each run goes on as follows:

Your starting location is pretty much in the middle of the island where you’ll be able to eliminate enemy interference by entering the Taken area and shooting the orbs, which will cause the Bonfire to grow.

Also check out our complete guide on How to defeat Taken Interference in Bonfire Bash Destiny 2 Solstice of Heroes 2022.

The next step is to Stoke the Bonfire, which necessitates eliminating a group of enemies designated as Ignition Carriers displayed as diamond icons on your HUD. When a carrier is killed, they will drop an Igniter, a white ball used to fuel the Bonfire in the middle of the map. You will, for the duration of the eight minutes, have to fight minibosses, collect their orbs, and throw them at the bonfire.

In order to increase your score, you need eliminate as many of these as possible by working with your Fireteam to search the entire map for them as they spawn. You’ll also see a timer in the left-hand corner of your screen, below the activity description.

After depositing an Igniter, Takens will spawn again, which prevents progress to your objective. The Taken Interference on your HUD indicates where you need to go. Take out the Taken defending the Blight, destroy the Blight, and then do it again two more times, then the Bonfire will be reignited.

When the Bonfire Bash’s timer runs out, no more Igniters will appear, and a Taken Heat-Drinker will appear not far from where you first spawned. There’s no need to panic though, you have infinite time to defeat the boss.

The run ends when the Boss is killed, then loot and Silver Ash are dropped near the Bonfire. When you have more Solstice armor equipped, you will convert a greater quantity of Silver Leaves, and more Solstice armor will drop as a result. Additionally, the more Igniters you throw into the Bonfire, the more loot you will have at the end of the match.

That’s our guide on How to Do the Bonfire Bash Activity in Destiny 2. If you like this guide, check out our other Destiny 2 articles here.