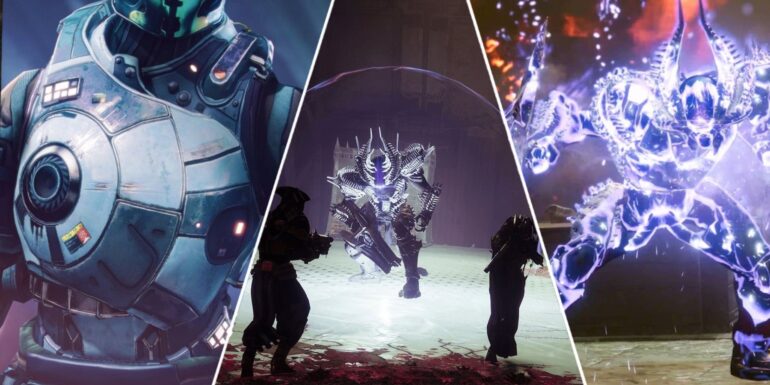 Destiny 2 has amassed a good number of expansions even before it became free-to-play. Here is a list of all the Destiny 2 expansions:

Although players have enjoyed many of Destiny 2’s expansions, not all was so well received. Each expansion introduces new missions, locations, weapons, and armor. For more details on them, check below.

The Destiny 2 Curse of Osiris expansion takes players to the desert planet of Mercury for a new story. This expansion raised the level cap and introduced the Raid Lairs, which are smaller versions of Leviathan Raids, which players and their Fireteam can complete without having to invest many hours.

This was the expansion that introduced the Lost Prophecy weapons. These craftable guns are made by collecting unique material that can be gained from participating in certain activities like public events and Strikes.

Reception of the Curse of Osiris was lukewarm at best. At worst, players didn’t really find this expansion to be enticing. The Lost Prophecy weapons weren’t as glamorous as hyped up to be. And the newly introduced Infinite Forest, which generated a random succession of stages, was loathed by many for being a boring chore. It was so boring that many opted to just run past enemies instead of engaging unless they had to.

The Destiny 2 Warmind brings with it, not one, but two new planets, Mars and Hellas Basin. Like the previous expansion, this one also comes with its own campaign. New Adventures and Strikes were also added, which included the second Raid Lair, Leviathan, and Spire of Stars.

The most memorable addition that Warmind contributed was the Escalation Protocol. This special public event introduced what was essentially survival mode against seven waves. Each wave becoming more difficult than the last. Players who make it to the end of Escalation Protocol get some awesome rewards after defeating a big boss.

The Destiny 2 Forsaken expansion is quite possibly the most memorable expansion of the game. It not only brought back attention to the dwindling player numbers of Destiny 2, it also added a series of changes that made the gameplay much better.

Here is everything added from the Forsaken DLC:

The weapon system overhaul has got to be one of the best changes to Destiny 2. No longer are weapons restricted to primary and secondary. Players are now free to equip a mixture of weapons on their own choosing.

The Destiny 2 Shadowkeep expansion didn’t add too much into the fold but introduced important changes. It did give us the Moon, literally. It’s the new area for us to explore filled with activities like Nightmare Hunts. We could also participate in a new Raid, Garden of Salvation. Besides a new campaign, Shadowkeep also introduced new Exotic weapon quests and more.

Shadowkeep was also the expansion that introduced cross-save support between platforms. This was expansion that rebranded Destiny 2 as a free-to-play title under the name of “New Light.” Free-to-play players also got access to the first two expansions without cost.

There were four new seasons introduced in Shadowkeep:

The Destiny 2 Beyond Light expansion takes us to one of Jupiter’s moons, specifically Europa. Under the harsh icy conditions, players are tasked to uncover the secrets that lie underneath the surface. On this expansion, an elemental power called Stasis in introduced which each of the three main classes wield in different ways. With Stasis, it adds new subclasses for players to explore.

Besides a new campaign, the Deep Stone Crypt raid was introduced for this expansion. Overall a rather milquetoast addition compared to some of the previous expansions.

The Destiny 2 Witch Queen expansion expands the power cap and introduces a new campaign with some cool new additions. Players will get to explore Savathûn’s Throne World. This expansion introduced Glaives for each class, which are spear-like melee weapons that players can equip. The Witch Queen also gave us weapon crafting, which allows us to add modifications and stat combos.

Check out our Destiny 2 Witch Queen – Review for out thoughts on this expansion.

The Destiny 2 Lightfall expansion is still underway and with no clear release date. This is the seventh expansion that promises to introduce a new campaign, destination, Legendary difficulty, weapons, Raids, and more. There is also a new subclass that is rumored to be coming our way.

That’s our Destiny 2 expansion list. We hope you found this article to be informative. Stick around some more because we have plenty of Destiny 2 articles that you’ll find interesting such as the upcoming Destiny 2 Season 18 Release Date, Leaks New Arc 3.0 Changes, New Dungeon Details, and More.

If you’re new to Destiny 2, you might want to know which expansions are worth their salt. Check out this Youtube video from LaserBolt explaining which Destiny 2 expansion is worth buying.