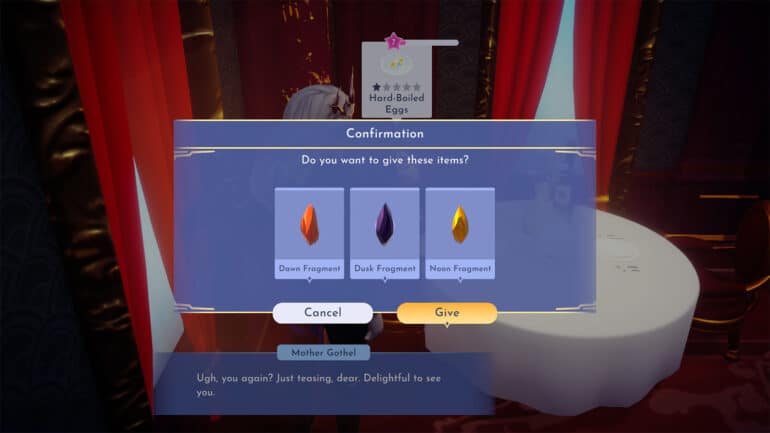 Mother Gothel is working on repairing the sunstone, and in order to do so, she needs to obtain its fragments that have been scattered across the valley. The catch is that they do not always appear before the player as they will only show up on certain times within a day.

In this guide, we will talk about when and where to find the Sunstone Fragments in Disney Dreamlight Valley.

Pre-requisites to finding the Sunstone Fragments

In order to get the quest, you must first raise Mother Gothel’s friendship level to level 7. You must also raise enough friendship levels with Merlin and have access to the Sunlit Plateau.

There are three Sunstone Fragments that have to be found throughout the various areas of the valley. The quest lists down the locations of each of the fragment, but it only shows the general time of day of when these fragments can be spotted. It can get tricky finding out when to look for these fragments without an in-game clock, but we were able to find them and we’ve noted down the time when we were able to spot these fragments.

Note: The times listed down are based from our observations through our gameplay and may not be the exact times that the fragments start showing up. It is also possible that the time of when the fragments appear can overlap with each other.

The Dawn Fragment can be found at the Sunlit Plateau in the morning, starting from around 5 a.m. local time. It is near the river in the middle of the biome.

The Noon Fragment can be found at the Glade of Trust during midday, starting from around 9 a.m. local time. It is near the big tree at the west side of the biome.

The Dusk Fragment can be found at the Forest of Valor at night, starting from 5 p.m. local time. It is near Anna and Kristoff’s house.

Once all fragments are found, head back to Mother Gothel and show them to her to complete the quest.

Additional note: Though it is possible to do the time travel trick by adjusting the platform’s local time to advance through the day and grab the fragments, it is not recommended to do so. With the way that the game is designed to work by syncing online, performing a time travel may cause some syncing issues.

Check out this video by Game Guides Channel showing the locations of the Sunstone Fragments: