Learn who to rub shoulders with. 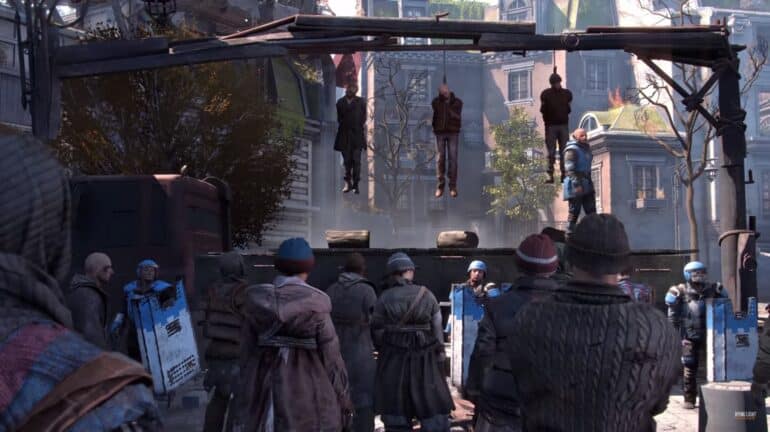 Dying Light 2 features two factions each wrestling for control of The City. Each faction has its own members, motivations, and unique assistance they can provide you should you choose to side with them.

There will be certain moments in the game where you’ll be asked to pick which faction you’ll support.

What Factions Are in Dying Light 2?

There are only two factions to choose from in Dying Light 2, the Peacekeepers and the Survivors.

Survivors aren’t bad people in general, but they can be pretty jaded and unwelcoming. You’ll get your first taste of their hospitality when they try to hang you in the Bazaar in the beginning of the game. Though they can be a welcoming bunch once you prove yourself.

Peacekeepers initially come off more welcoming. They give you the chance to prove yourself useful and their members can save your life a couple of times. However they can be a divided group who will treat those who don’t align with them with disrespect.

How to Level Up City Alignment in Dying Light 2

You can level up City Alignment by assigning Water Tower Stations and Electrical Station Facilities to either the Survivors or Peacekeepers.

Each district in The City will have a single facility that you can use to assign City Alignment. Despite Techland’s initial announcement that there will be multiple factions in the city (which is true) only two of them can actually be allied, the third faction being too crazy to ever side with.

Choosing City Alignment will remarkably change the look of the city to fit the faction controlling it. That district will also be outfitted with several

There are two types of facilities in the City which you have to activate to change alignment. They’re Water Stations and Electrical Stations. Some choices affect the story, while others can be activated via free roam.

In the main story mission Water Tower, you’ll be asked to choose between giving water to the survivors or to the peacekeepers. The peacekeepers don’t really seem to need the water but require the bargaining chip to solve a murder. The survivors are in dire need of it, but they’ve been pricks to you the whole time.

Really the biggest deciding factor here is how forgiving you are of being nearly hanged to death, being nearly choked to death, and being threatened with death multiple times by the folks over at the Bazaar.

This is the first time you’ll unlock a City Alignment choice. Prior to this point, you won’t be able to interact with facilities.

After you’ve gotten the wires where they are needed to be in the Downtown Electrical Station, you’ll have to choose who the power goes to. This is part of the main story mission A Place to Call Home.

An optional electrical facility. You can find it to the south of the Garrison region. You’ll have to connect the power lines with the proper input.

Despite the name, Wharf Water Tower is located in the Muddy Grounds region. The entrance to this water facility is in the building opposite. There is an air vent you can use the paraglider which will take you straight to the top bypassing any need for climbing.

You can’t enter this electrical station via the doors. There is a broken window above where you can descend down into the facility from.

This is Renegade territory so you’ll have to fight them first before getting into the Electrical Station in the district. You’ll have to enter this facility via the broken windows above.

Despite the name, this facility is located in the Lower Dam Ayre district. You’re going to need to up your parkour skills to be able to get to this location. Make sure you have Tic Tac, Wall Run, and Wall Run Jump as you’ll be needing those to solve the platforming puzzle.

Both Factions have rewards to give you should you choose them in Dying Light 2.

The Peacekeepers and the Survivors each have something unique to offer you. Though you won’t be able to get all the rewards, some are certainly better than others. Make sure to pick which faction you want carefully.

Here are all faction rewards in Dying Light 2 arranged in order.

As you can see, Peacekeeper faction rewards are more focused on combat. One of their more notable rewards is the Crossbow Pack which is a powerful ranged weapon. If you prefer to take the fight to the Infected and any bandits, then the Peacekeepers have your back. Their crossbow is particularly useful since the only other ranged weapon in the game is the bow. Not counting the handmade shotgun, Boomstick.

Survivors focus more on traversal. All their rewards are related to parkour. If you love moving around and staying on your feet then the survivors have your back. You’ll find their air vents to be one of the best ways to vertically travel around.

Can You Switch City Alignments in Dying Light 2?

You cannot switch the city alignment once you’ve picked a faction to control a region in Dying Light 2. This means you better be careful about who you decide to rub shoulders with because once you pick a faction to favor in a certain district there is no going back.