A guide on how to defeat Crucible Knight in Elden Ring. 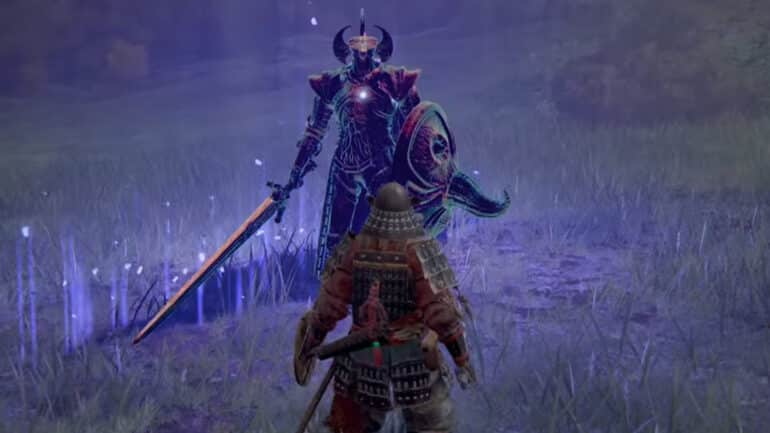 In this guide, we will look into the fight against the Crucible Knight and share some tips and strategies to defeat him easily.

Crucible Knights in Elden Ring can be encountered in these areas:

The rewards in beating Elden Ring Crucible Knights differ depending on which knight you defeat:

Crucible Knights are adept at chaining their attacks into combos of varying lengths. The fights have two phases, in which on the second phase (HP at <60%) they start using their incantations.

Crucible Knight will wind up his sword over his left or right shoulder and slashes diagonally.

Depending on where you are at, he can do a small charge to close the gap before swinging his sword. These attacks can be easily spotted and dodged, but you need to be aware for any follow up attacks that may follow.

If you are a melee attacker, this attack is highly punishable by doing perfect parries. Only one perfect parry is needed to get an opening for a riposte.

Crucible Knight will wind up his right hand and his sword backwards before charging forward and thrusting his sword.

Simply back away to a safe distance or dodge to the sides to avoid getting hit. This attack can be parried.

Crucible Knight will put his shield in front of him and charges towards the player for a short distance.

Timing the dodge to this attack right will allow the chance for a counter-attack as it takes time for him to recover.

Crucible Knight will drag his sword across the ground and then swing it upwards, flinging rocks with it.

Dodge accordingly to avoid getting hit, or you may go on the offensive and time a heavy strike to land once his arm is raised. This attack can be parried.

Crucible Knight will raise his sword straight up using both hands. He will then raise his left leg before stomping the ground to release a shockwave that goes in a cone. He will then follow it up by swinging the sword downwards.

He normally does the Ground Stomp first and make sure to avoid getting hit by it. Failing to do so will make you susceptible to the following sword swing. One good tell is when he puts his shield on his back; once you see him do this, dodge to his side going to the back, or time the roll to avoid the shockwave.

Crucible Knight will spin around with both hands on the sword to hit the player twice.

This attack will only happen once he has both his hands on his sword coming from doing a Ground Stomp or a Downward Sword Swing. Dodge away as the interval between the spins is a bit tight making dodging them both a bit risky.

Crucible Knight will start mixing in his incantations in between combos or attacks. He will do a power up animation once his health goes below 60%.

The Tail Spin has two variations. The first one is a single spin that spans his close range. The second one is a double spin with the first spin covering his close range, followed by a second spin that covers a large area of his mid range.

This is one of the deadly attacks since there’s no easy tell if he will follow-up with a second spin. Just keep in mind to avoid the first spin and it’s a safe assumption that he will do a second one, so it’s best to just back away. Dodge rolling through both spins is possible.

Crucible Knight will materialize wings and fly upwards. He will then dive downwards and forwards towards the player leading with his sword.

The tell for this attack is unique and the animation is long, so you can easily spot it. You can time your dodge to the side once he is about to hit you or you can also dive roll towards him at the right moment.

Crucible Knight will spin his sword behind him to charge it before slamming it to the ground in front of him.

The charging animation give some time to prepare so you can easily dodge this attack. Make sure to move away enough to stay clear from the sword’s slam AoE.

Here are additional tips on how you can beat Crucible Knight in Elden Ring:

Check out this video by Carneage on how to defeat the Crucible Knight: