A guide on how to complete the Escape Artist level in Escape Academy. 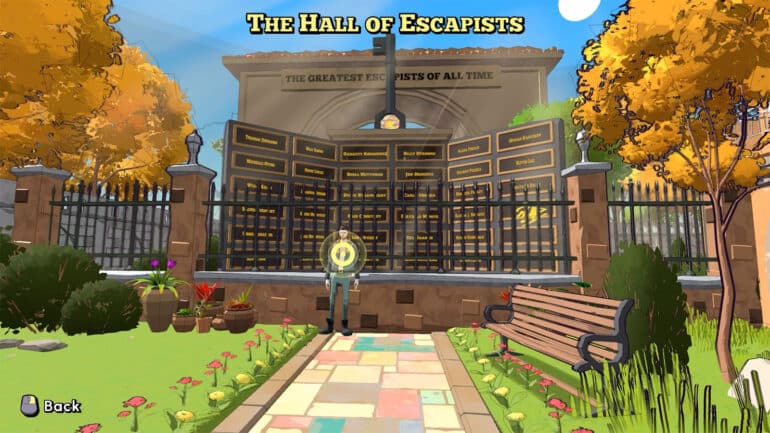 Escape Artist is a level in Escape Academy where players will have to solve puzzles to get into the Hall of Escapists and get their name spray painted amongst the greatest escape artists of all time.

In this guide, we will be walking you through the Escape Artist level by showing you what to look for and how to solve the puzzles.

How to unlock the Escape Artist level in Escape Academy

After clearing the Prologue and the Entrance Exam, The Hall of Escapists area will be open where the Escape Artist level is at.

Upon traveling to The Hall of Escapists’ courtyard, you’ll be greeted by Professor Slip. You’ll then be able to roam around and check out the place, but the clock is already ticking and you only have 30 minutes to clear the level, so it’s best be light on your feet and get to work.

Your objective is to leave a mark on the monument showing all the greatest escapists that lived. You’ll have to solve some puzzles first to get the materials that you will need and to reach the monument.

There are a couple of interactibles and items that can be picked up in the area. Pay attention to the visual clues as well since they can appear everywhere.

Head to the building on the left, which is the studio, and look for these three paint-stained items:

Once you have all three items, place them on the table with a bucket on top of it. The paint-stains on the table and items will reveal a 3-digit code which is “139”. Use this code to open the locked locker where you’ll find an Anti-Invisible Ink.

Head to the corner of the studio where there are color stains and white lines which seem to have been erased. Use the Anti-Invisible Ink to reveal the lines that connect the color stains to the combination lock for the door on the left.

To solve this puzzle, you’ll have to figure out what color should be on the section of the lock by following the line from the lock to the color stain. If a line arrives at a splitter, you’ll then need to follow both lines and then mix the colors that they lead to, i.e. blue + yellow = green. Once you figure out the color, scroll through the options in the lock section until you find the matching color, then do this for the rest of the sections.

The solution goes, from the top: red triangle, purple diamond, yellow pentagon, green circle. This will unlock the door to the teacher’s office where you can get Spray Paint from the closet.

Back in the studio, open the farthest locker where you’ll find the Open Sesame painting. Then, do to the desk at the right side and place the painting on the frame. It will cut the painting into strips which you can then rearrange in order.

After rearranging the slips, pay attention to the red arrows on the painting. They go, from left to right: Right, Left, Right, Up, Down, Down.

Once you have memorized or taken note of the arrow, go to the locked room directly behind you across the room. Punch in the arrows in order and you’ll unlock the door.

Inside the room, there is a safe on the left side and a painting scanner on the right. To get the code for the safe, you’ll need to scan the canvasses on the right wall and decipher the clues.

The first canvass on the far left shows a sketch of the fountain, then followed by the cube sculpture, then the keyhole sculpture, while the fourth canvass shows a bunch of symbols arranged in a 3x3 grid.

Head outside to the courtyard and look for these landmarks and you’ll find the symbols spray painted on them. Take note of these symbols and head back into the room to look at the fourth canvass. Locate where the symbols are on the grid and enter them in the safe’s panel in the order from left to right to open the safe.

Inside the safe, you’ll find a Strange Sculpture, along with a note from Prof. Slip that says “Face him and knock”, and a picture of a face and vase illusion.

Face on the Door

Head outside the courtyard and go towards the door with the face on it. Place the Strange Sculpture on the face which is its nose. You’ll then have to reconfigure the face’s eyes, eyebrows, and jaw to unlock the door.

Once you find the right tablets and move the facial parts on the door accordingly knock on the door and it will open up, granting you access to the Hall of Escapists.

Inside the Hall of Escapists, you’ll see a statue with two keys on the pedestal on both of its sides. The keys are numbered as #2 and #5. There are also three other wings that have locked gates which have numbers spray painted on them. From the left, the numbers go 5, 10, and 7.

Since you only have keys #2 and #5 for now, adding them up amounts to 7, so head to the east wing and use both keys on its gate.

The east wing contains four busts that can be turned left or right. beside the gate of the wing are silhouette portraits of the people depicted on the busts. Pay attention to the direction of where the silhouettes are facing as you’ll need to turn the busts according to the same direction.

The solution for this puzzle, facing the busts:

Once the busts have been turned properly, a secret door will open where you can get keys #3, #4, and #7.

Use keys #3 and #7 to open the gate to the north wing directly behind the statue.

The north wing will have six busts and each head can be flipped up like a switch. Check out the paintings beside the north wing’s gate to find out which people got their heads chopped off as these are the ones whose heads you’ll need to flip up.

The solution for this puzzle is to flip the heads of Timmy, Michelle, and Windsor. Once solved, another secret door will open, revealing key #1.

Since you only have keys #1 and #4, use both of them to open the gate to the west wing. Inside the west wing are five busts places on pedestals with different heights. Similar to the previous puzzles, you’ll have to look at the paintings around the gate to find out how to rearrange the busts in the proper order.

From the five paintings, you can work out the people’s heights based on who they are with and based on the white picket fence.

The solution goes, from tallest to shortest:

After rearranging the busts properly, the secret door behind will open up which leads to the Wall of Escapists where you can place your name using the spray paint.

You have successfully cleared the Escape Artist level, congratulations! If you want to, you can do the level again to try and see if you can clear it in a faster time.

Check out this video by Game Guides Channel showing how to solve the Escape Artist level: