A guide on how to complete The Entrance Exam level in Escape Academy. 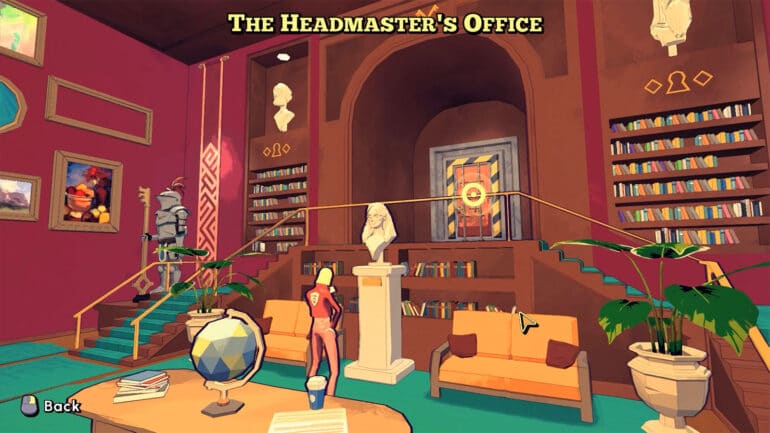 The Entrance Exam is a level in Escape Academy where players are tasked by The Headmaster herself to escape her office in order to gain entry into the Academy. It’s quite a short challenge that requires attention to detail and some creative thinking to clear.

In this guide, we will be walking you through The Entrance Exam level by showing you what to look for and how to solve the puzzles.

How to unlock The Entrance Exam level in Escape Academy

The Entrance Exam level becomes available as soon as the Prologue level has been cleared.

Your main objective is to get out of the office before it gets filled up by poisonous gas, but in order to unlock the door, you will have to figure out what The Headmaster’s full name is. You’ll only have 15 minutes to complete the level.

Get the Small Key and Open the Drawer

The first thing to do is to get the Small Key which is inside a bag that’s hanging on the coat rack by the locked door. Once obtained, head over to the desk and use the key to unlock the padlock that is on the drawer.

From inside the drawer, you’ll obtain a Group Photo and a Screwdriver. From the Group Photo, there are several people wearing masks with their names written above their heads. based from the hairstyle alone, you can deduce that “Sandy” is The Headmaster, which is further proven by her mask displayed inside the secret room later on.

Crawl in the Vent

Use the Screwdriver to unscrew the vent near the locked door. Crawl inside it and you’ll see a sticker with a phone number on it, which goes: 952-4242.

With the number noted down, head back out and towards the desk, and dial the phone number on the phone. Jeb will pick up the call from the other side and he will mention that The Headmaster’s family name is “Solange“.

Get the Floppy Disk

Near the desk, at a table near the window is a Floppy Disk that will be needed in the next room. Grab it and proceed to the next step.

Get the Travel Photos

Head towards the glass table where you’ll see a black box. Printed on this box are three icons of items and the phrase “I’m COUNTING on you.”

To get the combination for this box’s lock, you’ll have to count the number of items within the room that are depicted by the icons on the box. There are two clocks, five plants, and three trophies in the room, so key in the number “253” into the lock to open it. You’ll then receive three pictures of The Headmaster visiting three different countries in different years.

Go to the shelves where there are books that have country names on their spine. Based on The Headmaster’s photos and on the years she visited the countries, you’ll have to push three books in this order to reveal the secret door: Egypt > Japan > Greece

Get the UV Lightbulb

Inside the secret room, to the right is a computer where you can insert the Floppy Disk into. Doing so will reveal the word “DEAD”.

Next, head towards the piano and play the keys D-E-A-D to reveal a secret compartment that contains a UV Lightbulb.

Insert the UV Lightbulb in the Lamp

Go to the broken display case near the secret door and replace the busted lightbulb with the UV Lightbulb. This will reveal The Headmaster’s middle name on the diploma which is “Jacqueline“.

Enter The Headmaster’s name in the terminal

Head to the terminal by the locked door and enter in “Sandra Jacqueline Solange” to finally unlock the door and clear the level. Congratulations!

Check out this video by Game Guides Channel showing how to solve The Entrance Exam level: