God of War Ragnarok – A Stag for All Seasons Favor Walkthrough 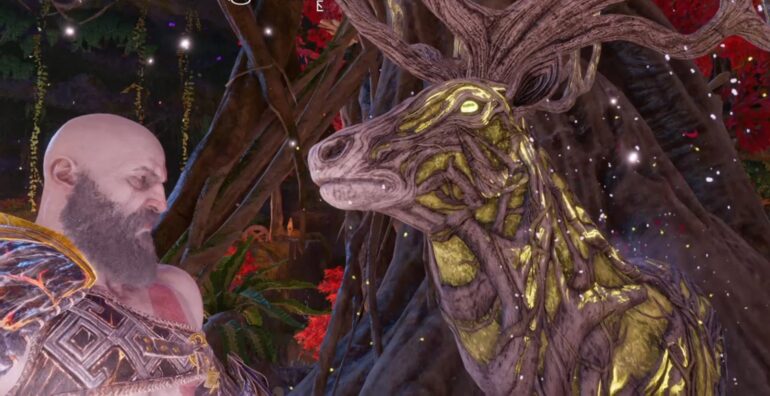 In the A Stag for All Seasons favor, Ratatoskr asks Kratos to track down the Seasonal Stags that used to graze on the World Tree. Unfortunately, foolishness and a sense of pride led to this careless mistake. One that can lead to the destruction of the realms yet again.

In this guide, we’ll tell you how to find each of the stags and what obstacles you need to clear in order to access them. As well as some of the other things you could be doing in the meantime to optimize your run.

A Stag For All Seasons Locations

For the “A Stag for All Season” favor, you’ll be given Yggdrasil Leaves to help calm the frightened animals. Don’t worry about any other follow-ups, the aspects got that one covered.

Dainn the stag is found within the Wishing Well in the Crater. The location is first accessed after clearing the path to it from the Sinkholes area. Exiting from the top of the well will allow you access to the area from the Crater Entrance Mystic Gateway.

Finding Dvalinn the Stag of Summer is more complicated compared to the others. It is not found as easily as the others but if you’re looking to navigate the ins and outs of the Jungle region, I’m sure you’ll stumble upon him eventually.

But for those who are still having a hard time, here’s what you need to do.

To get to it, you’ll first need to clear the part of the river where the ogres throw boulders at you. Then you’ll need to destroy the wooden barricade in the middle of the twin-headed dragon statue. Once you’ve done that, change it to daytime, and return back to the statue. The vines will be gone and you are free to go to the other side and retrieve the stag.

Duneyrr, Autumn’s Stag, is found close to the Sinkholes Entrance Mystic Gateway. You reach the gate naturally as you explore the area East of the Plains.

Durapror the Stag of Winter is found right next to the Overgrown Tower Mystic Gateway. You’ll still need to confront the Crimson Dread first before unlocking the gateway. This is most likely the first seasonal stag you’ll encounter as you explore the Crater.

This favor is a clear change of pace from what we’re used to. If you play your cards right, you never had to lift up your blades in self-defense… for the most part.

Completing this Favor will reward you with the “Pure of Hart” Silver Trophy.

Watch this walkthrough video by Backseat Guides showing All 4 Stag Locations in God of War Ragnarök’s A Stag For All Seasons Favor: