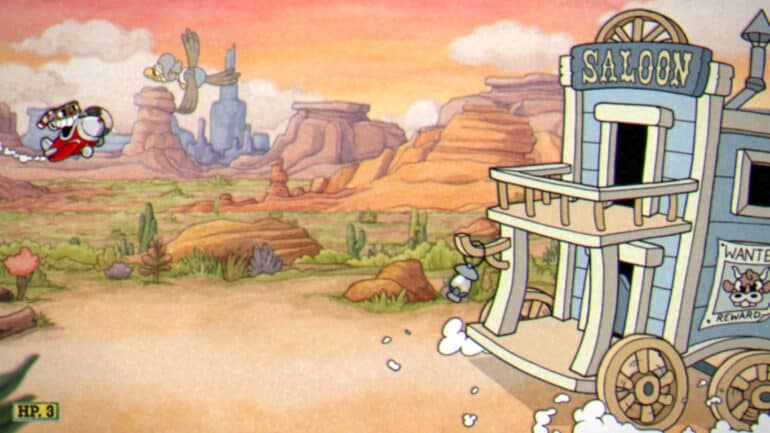 Esther Winchester in High Noon Hoopla is the first and only biplane boss fight in Cuphead DLC. She is a grueling obstacle course and her assaults are difficult to dodge even if you are aware of everything that is going on. Also, being constrained to the plane also means that you cannot use any of your advanced abilities or weapons.

It is a fast-paced fight with 4 stages requiring quite a bit of patience. This is due to the fact that crossfire is very much a thing and if you aren’t taking your time, especially in Phase #3, you will find yourself getting trapped in unavoidable attacks.

The first phase, as in many opening encounters, is a chaotic affair straight off the gate. Here are the kinds of attacks you will encounter at any given time.

Esther Winchester will move better the lower and higher portions of the saloon. Where she pops out does not determine the kind of attack she will do. She is just as likely that she will do her inkpot attack as she will her cactus wrangler bit.

One of the earliest attacks Esther will pull is her inkpot attack. As you can see from the picture above, the ink blobs will travel roughly past the middle of the screen before looping back to Esther, all the way loosely tracking the player. Once the ink blobs reach the edge of the screen, they will turn into snakes and will slither in your direction. Once they are close to your position, hold your vertical position. They are so dead-on course that you can avoid them by not going up or down. You’ll still need to go left and right to avoid things but it’s better than trying to avoid them with a last-second turn.

If you don’t pay attention, they can catch you off guard, doubly so since there will be undoubtedly other things happening on screen.

When Esther goes down to the lower half of the saloon, there’s a chance she’s going to perform her lasso capture move. When she does this, you can free switch to your bomb alternative attack for a second or two of free damage.

This is a lengthy move that’ll leave her open for a few seconds. As you can see above, she’s busy wrangling a cactus for a couple of seconds before letting it go. You won’t be totally free to damage her during that time. There’s a high probability that the vulture and horsefly can pop into the screen.

The vulture will go towards nearly the middle of the screen before dropping the stacks of dynamite that it is carrying. There is loose tracking on it as it drops and chances are it won’t hit you. You should be more worried when the dynamite hits the ground and starts to scatter. It will always shatter in the same pattern. It’s always going to be 3 sticks of dynamite and then 2 sticks. You will be 100% from the attack if you go below the middle dynamite as the 2 follow-up sticks go in two different directions.

The horsefly is one of the most annoying distractions you’ll see in any encounter in this DLC. It will casually go across the screen like nothing matters. Once it reaches the other side, it spits out a quickly spiked projectile that will hit you if you aren’t paying attention. But even if are you, there are others taking your attention.

Do yourself a favor, destroy the horsefly if you are close to it. With enough distance, you can negate much of the threat of the projectile. Maybe even ignore it.

As you can from the picture above, you can face all of these happening at once. Keep your cool and watch all the movements and you should be fine.

When you’ve done enough damage, Esther will break the roof of the saloon and she’ll be fully unleashed. She sucks in the saloon and surrounding riches. Watch out for the vulture as it does one final drop.

During the second phase, Esther will draw in loot from behind. If you keep your focus, you can easily evade the incoming debris. Though you will want to keep an eye out for the smaller coins floating around. They can definitely catch someone off-guard.

When Esther’s done vacuuming loot, she’ll start firing back the loot. The safes with wings aren’t the hardest thing to evade, but it’s the contents that spill out that you will want to watch out for. The coins occasionally blend with the background and together with the stacks of money, can prove to be challenging.

You may need to go small, especially when the safes initially break open. Being small also gives you enough leeway to adjust accordingly.

This phase doesn’t go on for more than a couple of rounds if you constantly deal damage to her. Alternatively, you can stay well above the map and drop bombs on her. Just watch your back.

The third stage begins with Esther’s vacuum malfunctioning and sucking her in. The resulting explosion will leave Esther as a chain of sausages. This is probably the most dangerous phase of the fight as you not only have to keep Esther in mind but a constant stream of flying bean cans.

As stated earlier, this phase of the fight is probably the trickiest of them all. It requires the player to make adjustments on the fly. The biggest threat in this phase is the steaks Esther shoots at the player. They move in an independent circular fashion as they go to the edge of the screen. Counterclockwise isn’t too bad. It’s when they go clockwise is when things become complicated. Them lingering on the screen while you are dodging bean cans is a potential recipe for disaster.

Occasionally, she will start flapping her arms and taking a brief flight. While in the air, you won’t be able to drop bombs on her. Additionally, you are attack angle is severely lower, opening you up to steak attacks and the stray bean. You might want to focus on dodging while in this stage.

And finally, the bean cans. These annoying distractions come in two forms – cans with an open top lid or an open lower lid. Don’t sweat them too much. They are there to take your eyes off them from Esther’s attack after all.

You definitely don’t want to keep this phase going any longer than it needs to. Because if the steaks don’t go, the beans will.

The final phase sees Esther getting stuffed into a can of spam. She’s to send out two strings of wieners at the player. While shooting bursts of red-hot chili peppers.

The final phase is more a test of endurance more than anything else. The two strings will continuously overlap each other. You can fly between the thinnest part to avoid damage, but be on the lookout for chile peppers flying in your direction.

You have to be extra patient with this one. If you start losing your cool, it’ll be over… quick. If the string force you out, don’t be in a rush to go back for a firing angle. Sometimes, the strings aren’t that forgiving either. Some sections may have long thin parts while others… a lot of thick sausages.

Just keep hitting the can while dodging the strings and that should be everything you need to do to wrap up this fight once and for all.

And your reward for beating this stage is a money sack full of Desert Limes!

This is definitely one of the more challenging boss fights in the DLC. Still, we can appreciate an intense shoot-out every now and then, I suppose. Definitely worth going back over and over again for the challenge. That’s it, that’s all! See ya later!

Here’s a video by Level20 Games on Things you need to do to easily beat Esther Winchester in Cuphead DLC: