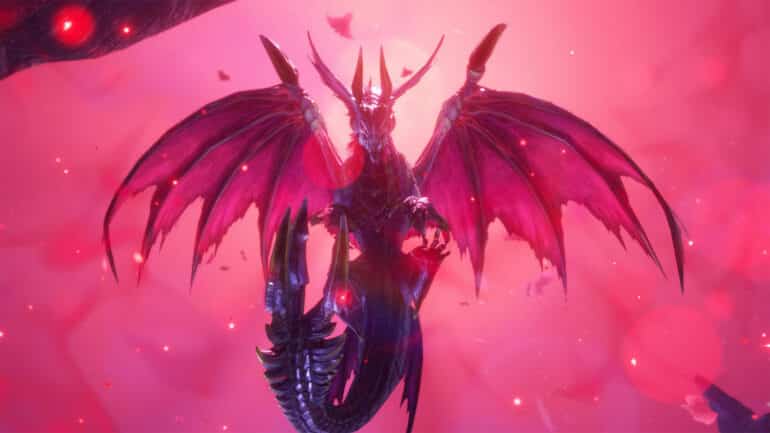 Malzeno is the flagship monster of Monster Hunter Rise: Sunbreak and is one of the elder dragons causing a disturbance in Elgado. Players have already experienced fighting against Malzeno through the demo and it has proven to be quite a challenge. Now that Sunbreak is out, hunters who failed the challenge can get their revenge, however this time, Malzeno’s full strength has been unleashed.

In this guide, we will talk about Monster Hunter Rise Sunbreak’s Malzeno and share some tips on how to survive and succeed in its hunts.

Malzeno has a typical dragon’s body structure with four legs and a pair of wings. It’s theme and look is based on the classical western depiction of a regal vampire, with its pale base color accented by the crimson red and the golden trim of its scales.

It is usually accompanied by Qurio, small winged leeches that fly in swarms and suck the life out of their victims. The Qurios have a symbiotic relationship with Malzeno who offer its protection in exchange for their life force. Malzeno also has the ability to drain the life of its victims, and when hunters get hit by some of its special attacks, they get inflicted with bloodblight.

The Bloodblight ailment slowly drains a hunter’s life, however this can be negated by dealing damage to any monster. This temporary vampiristic powers can become a powerful curse to take advantage of if a hunter knows how to work around with it.

When it enters its rage mode, its skin and scales turn dark and parts of its body will glow red. Hitting these red areas until they disappear will reveal the next glowing part. After all glowing parts are gone, it will revert back to it normal state.

If you can target the Malzeno’s weaker sections with blast weapons and ammo, you should be able to knock it out of the air mid-attack. In your encounter with the Malzeno, you will only have a limited amount of time to slash its legs or smack it on the head with blunt weapons. Shooting or attacking its wings or legs from the back is a waste of time.

Remember that the Malzeno has two distinct portions, the tail which is a weak point and the tail tip which is a resistant point. Attacking the Malzeno’s tail area will allow for separate attacks so you can deal more damage, but focusing on the wrong area can prove futile. Focus on the head as much as possible when using Ice, else you’re better off going in with a more devastating weapon.

To avoid being annihilated in a single combo, you might want to go for something with a Defense increase stat. The shield components of the Gunlance, Lance, Sword and Shield, and Charge Blade can be used to mitigate certain of Malzeno’s attacks. A lot of Malzeno’s strikes track you, impact a large area, or are too fast to react to without blocking. Do not be afraid to block.

Malzeno has several deadly moves that can be way too fast to avoid if you are in a bad spot. Once it enters its rage state, most of its attacks can deal bloodblight.

How to Beat Malzeno in Monster Hunter Rise Sunbreak

There are three phases in fighting the Malzeno.

Malzeno’s first phase is primarily just building up bloodblight, so you should attack cautiously and understand the principles of its attack patterns here. Bloodblight is a new ailment that the Malzeno inflicts with multiple different attacks, including penetrating wing hits, knockback wind blasts, and tail swipes. Although your healing will be greatly hindered for a short period, your attacks will also help you heal, so you’ll have to be extremely careful in combat.

In Malzeno’s second phase, it will become enraged, and its wings will turn a dark red. When Malzeno reaches its enraged mode, its limbs, throat, and tail will be covered in Bloodblight, and its skin will turn pitch black in hue. A lot of deadly combos and teleportation will be unleashed from here on out.

During the course of this mode, Malzeno will be able to move faster, use more powerful moves, and learn new strikes. A teleportation maneuver followed by a Bloodblight backstab attack, chained claw attacks, using its tail to stab you, AoE attacks that provoke earthquakes and throw you up in the air, all of these movements will inflict immense damage, climaxing with a giant ball made of Bloodblight that will explode, shooting homing ground missiles on different directions.

The folding of Malzenos’ wings reveals a multitude of teleports and dashes. Get ready for a move when this happens. Either a tail flip or a wing slam will follow a teleport strike. As they gain greater power, these moves will be used more frequently and from diverse directions. Wirebug dashes behind Malzeno before this move connects, giving you a perfect opportunity to inflict damage on its tail and wings, both of which offer rewards once slain.

Dodge, block and survive. Aside from the fact that it will revert to its original shape after a massive Bloodblight bomb burst, hitting the glowing sections of Malzeno’s body will deal additional damage.

Malzeno’s third phase is the most dangerous because all of his attacks have been boosted. It’s difficult to keep track of its combinations, and at some point it’ll start employing an ultimate attack that destroys the stage you’re battling on. Suppress the assault with a strong shield and then counterattack when you’ve recovered.

In addition to the red glow on the tail tip, you will also see crimson patches on its chest area. Target Malzeno’s weak points because if you let him build up too much power, he’ll unleash a blood nuke on you. You can take it out of Bloodening by focusing your attack on these points and causing damage as quickly as possible. If you’re successful in stopping its Bloodening condition, land a stun on its skull, then work the leg or head area until it dies. For the Elder Dragon to be knocked out of Bloodblight condition, it should be able to cure any wounds you have sustained.

The Malzeno Set can be crafted with the following:

The Malzeno Layered Armor Set can be crafted with the following:

Check out this video by Boss Fight Database showing a hunt against a Malzeno: