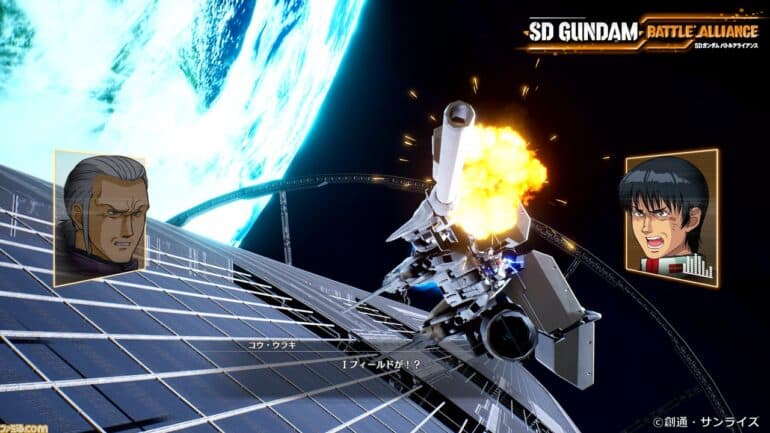 As the end of the month of August approaches, many mecha fans such as myself are awaiting the arrival of BANDAI NAMCO’s latest mecha JRPG game, SD GUNDAM BATTLE ALLIANCE. With so many leaks, gameplay, and details plus a demo release of the game, Gundam fans are now excited for its full release.

Just now, Bandai Namco has released the full list of Gundam series that will be part of SD Gundam Battle Alliance. Plus details of what else to expect in the game have been released and fans will be high over heels with these titles as will be played and be part of the whole story.

A world where the story of various ” Gundam ” works distorted by the “break phenomenon” unfolds.

In order to correct the false story of this world, players must take on missions with various mobile suits and pilots as a platoon leader leading a united front (Battle Alliance) of 3 units in 1 platoon. What awaits at the end of false history…

In SD Gundam Battle Alliance, fans will relieve and play famous iconic Gundam scenes and face off against rivaled suits. But not only do players face off against the likes of Sinanju, Epyon, and more but gamers will get a chance to face off against Mobile Armors as well. One of which is from the iconic rivalry of Kou Urake who pilots the GP03 Denobrium against his fate rival, Anavel Gato who pilot Zeon’s mobile armor, Neue Ziel from Mobile Suit Gundam 0083: Stardust Memory.

A special skill in SD Gundam Battle Alliance that uses 50% of players’ Break Gauge. Chain Breakers vary on the type of Mobile Suits players piloted and there are at least 2 types of breakers (Neutral & Reversal).

This gauge exists in powerful enemy suits such as enemy ace suits. In order to continuously attack a strong enemy, the balancer gauge must be reduced to break the enemy’s posture. Sub-attacks are effective in reducing the enemy’s balancer gauge.

Immediately after the enemy unleashes a big move, the balancer gauge will decrease significantly, so avoid the enemy’s big move and hit the sub attack to reduce it.

Bio: Known as the RED COMET and the greatest rival of Amuro Ray. He is willing to do whatever means are necessary for his goals to be accomplished even if it means sacrificing his loved ones and comrades. He uses a series of custom mobile suits suited to his style of fighting and is relentless

Bio: He’s a technician from the non-governmental organization the Junk Guild and pilot of one of three Astray prototypes. Besides being a Natural, he possesses a high-level intellect as a technician, and during his visit to Heliopolis, he witness that ORB has become active in the development of the ASTRAY series and by chance pilots and escapes with the Astray Red Frame and had a series of encounters that led him to play an important role in SEED series.

Bio: One of the “Innovade” created by imitating the evolved human “Innovator” in order to carry out the plan of Aeolia Schenberg. Despite knowing his creator’s true intentions, he hated the idea that humans can surpass the skills of an Innovade such as himself and decided to control humanity by any means possible.

Bio: He is among the few members of Gjallarhorn who is aware of the organization’s deterioration due to ongoing corruption amongst its members. He wishes to reform the organization so as to get rid of the corruption. To do so, he begins to don a wig and a mask to hide his identity and seeks Tekkadan’s help, supplying them with weaponry using his connection to the Montag Company. Using any means necessary, he eventually acquired and piloted the ASW-G-01 Gundam Bael, the mobile suit of Gjallarhorn’s founder Agnika Kaieru, to assert his legitimacy as leader of Gjallarhorn.

Bio: Gaelio is the only son of the Bauduin family, one of the “Seven Stars,” which unites Gjallarhorn. He is childhood friends with McGillis Fareed, who is from the Fareed family, and Carta Issue, who is from the Issue family. He is especially fond of McGillis, recognizing his abilities without regard to his background, and is making efforts to confront his true feelings in order to be a friend worthy of standing by his side but unexpectedly, he was betrayed by McGillis and was presumed dead. During the coup d’etat planned by McGillis, he announces to the world that he is still alive and plans to take down the traitor and his former friend using the Kimaris Vidar.

Also announced by Bandai Namco is the free DLC mobile suit from all SD Gundam games, GGF-001 Phoenix as he makes his return to the SD world once more and is free to download once the game comes out. More details of this free DLC unit will be revealed in the near future.