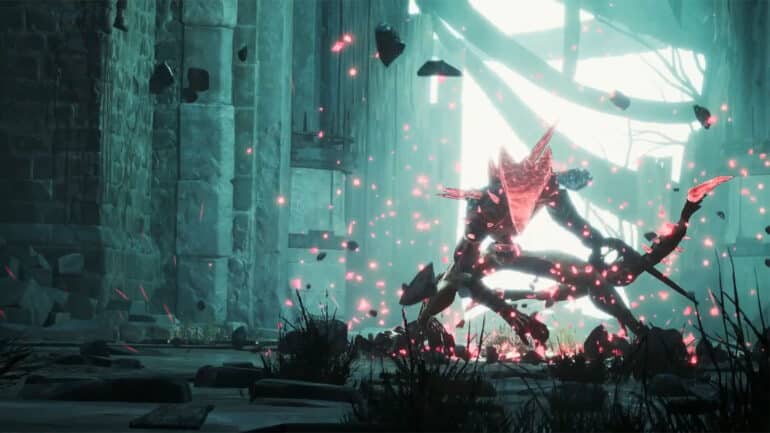 Death from Above is the fifth chapter in Soulstice wherein Briar and Lute face off against a Possessed boss enemy, Arrowhead. Not only does it attack from afar, it can also move at high speeds. Players will have to be on top of the fight and have good reflexes in order to defeat this boss.

In this guide, we will talk about the Arrowhead boss fight of Chapter 5: Death from Above in Soulstice.

Soulstice Chapter 5: Death from Above Walkthrough

Chapter 5 is mainly about the fight against Arrowhead. The duo will arrive at the Hallway of the Ramparts, and they will have to take the lift over to the Courtyard where the fight happens.

How to defeat Arrowhead

Arrowhead is an agile boss that uses a bow as its weapon. It can teleport to different spots in the arena and it has several attacks that it can use depending on its position and its current health level. Being a Possessed, it can only be dealt damage to if it is within Lute’s Banishment Field. We will go through all of its attack patterns to know how to react and evade them.

Arrowhead jumps and moves to a different spot in the arena. This usually happens when Briar is too close to it to perform a ranged attack, so it repositions itself in the arena.

Arrowhead aims its bow at Briar, charges it, and releases a powerful shot. This attack can be evaded by dashing to the side as soon as the charging animation ends, as shown by the charging light disappearing to its body.

Arrowhead swipes its bow in front of it. This attack happens when Briar is within its melee range and is usually followed up by a Jump Teleport. This attack can also be blocked by Lute.

At around 75% of its health, Arrowhead will teleport away and a short cutscene will play showing other enemies being summoned in the arena. These enemies will range from Broken, Pikemen, and Grievers, so make sure to have Lute ready to deflect and put up the Evocation Field when necessary. In succeeding attempts, it can even summon a Guard.

Arrowhead will hold its bow horizontally and charges it while four circles appear above it. It will then release a single arrow shot, followed by a delayed shot from each of the four circles. The charging time for this attack is slightly longer than the regular Charged Shot, and the delayed shots will still track you down, so make sure to dodge twice to evade both shots.

At around 66% of its health, a cutscene will play showing Arrowhead teleporting to three spots and leaving its ethereal shadow behind. It will then jump high on top of a ledge and the PoV changes beside Arrowhead as it looks below the arena.

It will then fire its arrow at one of the shadows, causing it to release an arc attack that grows in a cone shape as it moves forward. This attack can be evaded by jumping over the arc. Lute’s Evocation Shield will also be needed in order to deal damage to these shadows. The attack ends once all shadows are defeated.

Arrowhead will jump back down to the arena and it will be vulnerable for a few seconds. Depending on the length of the fight, this attack can happen once more, but with more shadows on the field.

At around 33% of its health, a cutscene will play showing Arrowhead jumping up to a high position, pulls out a glaive from its back, and uses it as an arrow. It then aims up and shoots the arrow to the sky, releasing a rain of arrows down on the arena.

The locations where the arrows will land will be shown by a faint red line, so try to evade these spots. Once the arrows land, they will start growing tendrils that creep outwards to the ground. Use the Banishment Field and destroy one of these arrows to create a safe spot as these arrows will explode after a few seconds.

After the explosion, it will jump back down and take a while to recover, so use this time to land some hits on it.

Once its health is down to zero, a cutscene will play where Briar lands the killing blow, but not before Arrowhead manages to do its final assault.

Check out this video by GamerFuzion showing the Arrowhead boss fight: