A guide on how to interact and buy items from the traders in V Rising. 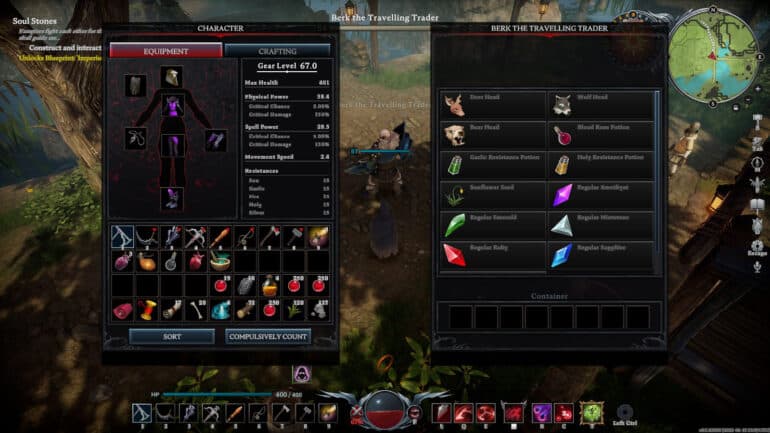 There are particular NPCs that players can trade with in V Rising that offer rare headgears and other valuable stuff, and these are the V Rising traders and merchants.

However, like the many inhabitants of the V Rising world, these V rising traders are also hostile to vampires and they only accept silver as payment, which makes it a bit more complicated than it needs to be when trying to transact with these NPCs.

In this guide, we will talk about Traders, what they sell, and how to make a transaction with them.

How to buy from Traders in V Rising

Before trying to buy something from these traders, there are a couple of things that you need to prepare.

Traders will start attacking you if you approach them in your regular vampire form, so you need to transform into a human being. To unlock the Human Form ability, you will have to defeat Beatrice the Tailor who can be found at the Daybreak Village.

Beatrice does not attack, but rather she flees away from you which can get pretty annoying with all the chasing around and fighting against guards. Plus, if she runs too far away from the village, she will disappear and respawn in the village at full health. It is recommended to have a power level higher than her (+Lv.38) and use attacks that impair her movement.

Once you have the ability, you can switch into human form and approach the traders. But, they only accept silver and when vampires carry silver, they get Silver Sickness which does tick damage that disrupts any form transformations.

To make a Silver Resistance Brew, bring these materials to the Alchemy Station:

To make a Silver Resistance Potion, bring these materials to the Alchemy Station:

The brew and the potion will last for 1,200 seconds when used. For the potion’s recipe, it can be obtained by defeating Raziel the Shepherd (Lv.60). This resistance stacks up with both the resistance given by cloaks (+15), with the potion, and while being in bear form (+25). To be able to carry 300 silver coins, you’ll need to have a cloak on and a potion drank, while to be able to carry 550 silver coins, you need to have the cloak, brew, and potion buffs active.

Once you have the proper disguise and enough silver resistance, here are the locations where the traders can be found, along with the goods that they sell:

Gavyn the Shady Dealer can be found roaming at the Farbane Woods near the Bandit Armory and the Bandit Copper MInes.

Berk the Travelling Trader can be found roaming at the east side of Dunley Farmlands near the Dawnbreak Village.

Ottar the Merchant can be found at Brighthaven Slums.

If you like this Guide, be sure to check out our other V Rising articles:

Check out this video by sl3nder mmo showing how to buy from traders in V Rising: